GUANGZHOU/SHANGHAI -- A large red banner at a Nissan Motor dealership in Guangzhou urges visitors to buy soon, but not for the typical reasons.

"Because of the shortage of semiconductors and rising raw materials costs, inventories of some models are tight," it reads.

A global chip shortage bears much of the blame for June's first double-digit drop in monthly Chinese new-auto sales since March 2020, when the coronavirus pandemic was raging in the world's largest auto market.

"Sales in May and June were worse than we had expected," a sales staffer at the Nissan dealership said. Such mainline models as the Sylphy are still in stock, but only in black or white.

New-auto sales fell 12% on the year to just over 2 million vehicles in China this June, according to the China Association of Automobile Manufacturers. This marked a second straight month of year-on-year declines, after the 3% drop of May.

Until now, the global chip crunch had only a limited impact on the Chinese auto market. Many vehicle plants resumed operations after COVID-19 infections subsided in the spring of 2020, enabling them to secure semiconductor components earlier than factories overseas. 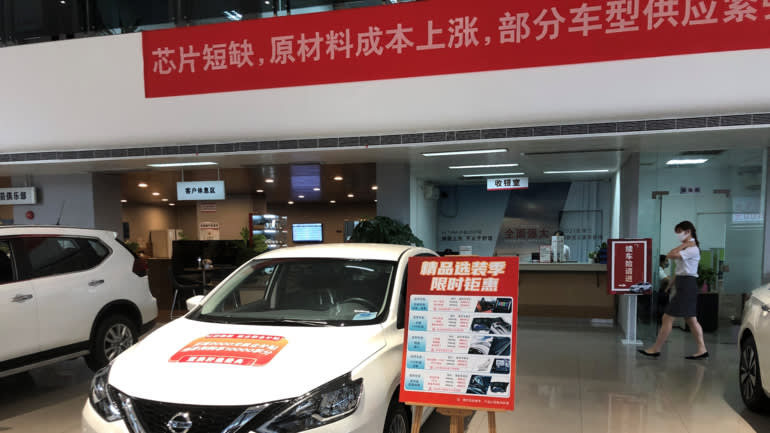 A red banner informs customers of shortages at a Nissan Motor dealership in Guangzhou. (Photo by Takashi Kawakami)

With auto sales recovering in China, "we're prioritizing supplies to Chinese factories," said a source at a large Japanese automaker, echoing decisions by many multinational players.

But the global chip shortage persisted longer than predicted, and the impact is starting to creep into Chinese automaking.

"We want to lift output of popular sport utility vehicles, but we're forced to cut production by the shortage of semiconductors," an executive at state-owned Chongqing Changan Automobile said. Delays in European parts supply led output to sink 10% on the year for May and 15% for June.

Privately owned Great Wall Motor reports a hit from the chip shortfall for some models. Sales have been strong, especially for the Ora electric-vehicle brand. Yet "for popular models, it takes three months to delivery," a worker at an Ora dealership said.

State-owned BAIC Group has struggled to deliver a popular SUV, the BJ40, in time since May.

China's passenger car inventories shrank around 30% on the year to roughly 480,000 vehicles in June, according to CAAM. The figure has declined for two consecutive months, and the association noted that falling below 500,000 is unusual.

New-energy vehicles, a category chiefly comprising electrics, have bucked the trend. Their first-half sales tripled on the year to nearly 1.21 million.

Major Chinese electric-vehicle maker BYD sold around 150,000 new-energy vehicles in the January-June period -- 2.5 times the year-earlier tally -- even as its gasoline vehicle sales declined 6% to roughly 90,000. General Motors saw sales growth of 30% for the half, aided by the low-cost Hong Guang Mini EV.

CAAM sees sales of new-energy vehicles rising 80% or so in 2021 to a record of about 2.4 million. But at only around 10% of auto sales, they cannot make much of a dent in the overall decline.

Electric vehicles are said to contain about 50% more semiconductors than their gasoline-powered counterparts. Automakers appear to be prioritizing production of electrics over gasoline autos, allocating their chip supplies in the process.

The auto association expects the effects of the chip crunch to ease somewhat in the third quarter and further improve in the fourth. It still projects that auto sales will rise roughly 7% to around 27 million units in 2021.

But "saying that things will ease in the July-September quarter is the most ideal scenario," said a senior official at a different industry group.

The Chinese auto industry, including associated services, accounts for an estimated 10% of gross domestic product. Knowing that a sales slump would be sure to hurt the overall economy, the government has come out with measures to stimulate demand. But any easing of chip procurement will be largely dependent on improving supplies and on automakers helping themselves.