Foxconn hits the gas on vision for 'fabless' EV future

TAIPEI -- Foxconn drew more than 1,200 companies from Taiwan and abroad to its inaugural supplier event Thursday for its electric-vehicle project as the iPhone assembler looks to expand its behind-the-scenes influence to another emerging industry.

Foxconn, formally Hon Hai Precision Industry, said it would focus on manufacturing the vehicles for other companies and brands.

Jack Cheng, CEO of the MIH Open Platform Alliance launched by Foxconn, says the project aims to move toward a new business model for the electric-vehicle industry and create the automotive equivalent of Google's free Android operating system for smartphones.

Among the suppliers are major global software and auto component manufacturers, including Japan's Nidec, Murata Manufacturing, NTT and Chinese battery maker CATL, in which Foxconn has invested. Such U.S. giants as Amazon Web Services and Microsoft, as well as German semiconductor manufacturer Infineon Technologies, are also joining the venture.

Foxconn plans to set up factories in China and North America, either in Mexico or in the U.S. state of Wisconsin. Mass production is expected to begin in 2023, and the company hopes to capture 10% of the global electric-vehicle market by 2027.

Cheng has accumulated four decades of experience in the auto industry, with stints as vice president for China at Ford Motor and chairman of Fiat's Chinese operations. Yet he is turning away from the manufacturing model in which he was immersed for so long to create something new, drawing the interest of many electric-vehicle makers.

Foxconn's ambition is to upend manufacturing of electrics in much the same way that Android transformed the smartphone industry. Google's introduction of the free operating system in the late 2000s, when smartphones had yet to fully take off, lowered barriers to entry for upstart handset companies that may have lacked the resources to build the core software on their own.

Among the most prominent examples are China's Xiaomi and Oppo, which have displaced big, established names like Lenovo and Sony to become two of the world's biggest smartphone brands. The ability to fully contract out production to companies like Foxconn has reduced the necessary upfront investment as well. 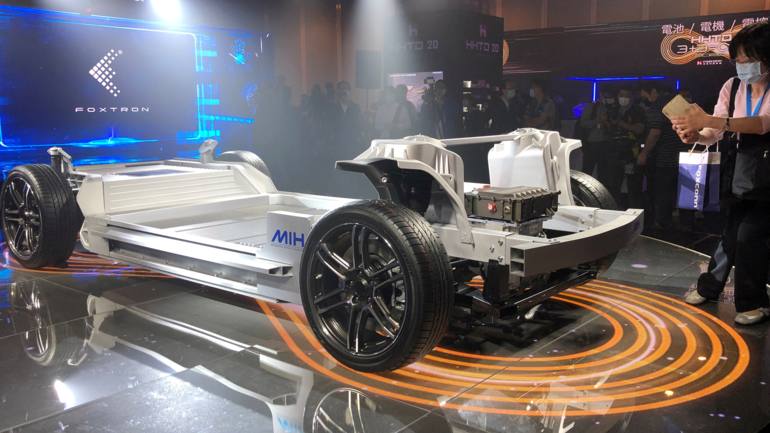 A prototype of Foxconn's electric-vehicle chassis attracts attention at an October 2020 company event in Taipei.   © Reuters

Now Foxconn looks to similarly level the playing field in the electric-vehicle industry with its open MIH platform.

Foxconn will provide detailed specifications for elements including the chassis and superfast fifth-generation wireless -- a must for automated-driving technology -- that companies around the world can use as the basis for their own designs.

The platform will cover about 80% of the process of developing an electric vehicle, with auto companies handling the other 20%, including exterior design and other finishing touches, according to an insider. In exchange for access to the free platform, auto companies will contract out all production to Foxconn.

The model is in keeping with a shift in the electric-vehicle industry that has seen a proliferation of new players that largely specialize in design, with no interest in investing in costly production facilities -- the equivalent of "fabless" chip companies.

This trend piqued the interest of Foxconn, which has made its name through contract manufacturing. Electric vehicles are not entirely dissimilar from smartphones -- they are expected to be similarly packed with advanced telecommunications technology in the near future.

"It's entirely possible for Foxconn to become a platform provider for the EV industry," said Mizuho Bank senior researcher Tang Jin, an expert in the auto and electrical equipment industries in China and Taiwan. "It's been predicted that it will partner with Huawei Technologies in the future."

"As with smartphones, Chinese and Taiwanese companies will dominate production of EVs, becoming the core of the industry," Tang said.

Taiwan has taken on a growing share of global tech manufacturing. Foxconn and another Taiwanese company handle a large share of iPhone assembly, and more than 80% of personal computers and nearly 90% of servers are produced here.

The island's outsize role in the semiconductor industry -- hosting more than 60% of contract chip manufacturing -- has brought it into the spotlight amid the recent shortage. Foxconn hopes to make itself indispensable in the electric-vehicle industry as well.

Foxconn Chairman Young Liu says it is very likely that the scale of its electric-vehicle business will outstrip its current mainstay operations like smartphone assembly.

The MIH alliance's first platform, slated for release in October, will be the initiative's first test, Cheng says. Big automakers will be watching closely to see if it proves as disruptive as Android.