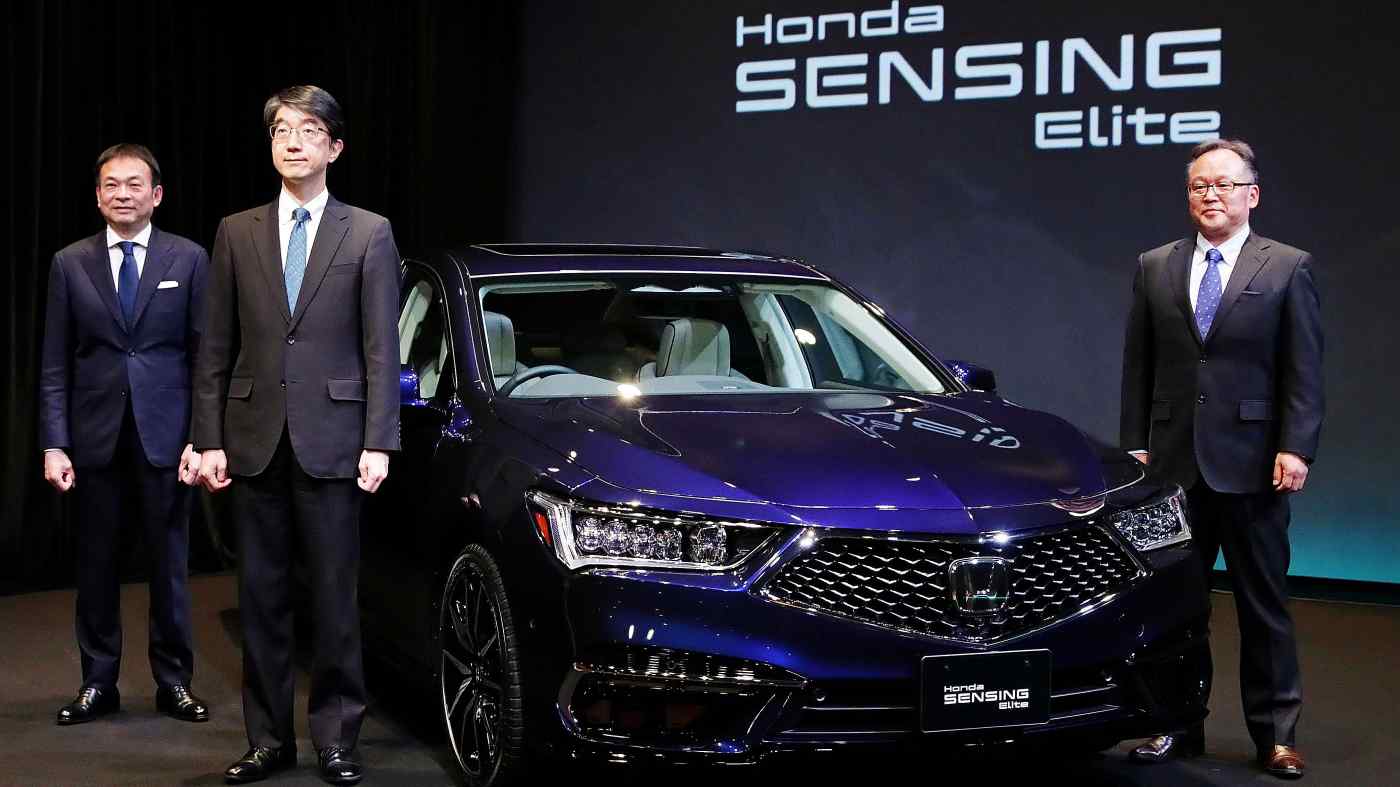 TOKYO -- Honda Motor will on Friday launch a new car equipped with the world's first certified level 3 autonomous driving technology, paving the way for the automobile industry to gear up efforts to commercialize such automation for passenger vehicles.

Industry experts are cautiously watching to see if the Legend, a luxury sedan that operates without driver supervision under certain conditions but requires the driver to assume control of the vehicle within seconds when alerted, can capture enough demand to suggest a way forward for other manufacturers.

Honda unveiled the Legend on Thursday at an online press event.

"Most accidents involve human error, and driving will be more exciting if we can mitigate the driver's fatigue and stress," Yoichi Sugimoto, who oversees driver assistance technology at Honda R&D, told reporters.

"We aim to reduce the driving burden. ... We are entering a new stage of Honda Sensing," he added, referring to Honda's driving assistance technology.

The new model's Traffic Jam Pilot system was approved by Japan's Ministry of Land, Infrastructure, Transport and Tourism in November. It can free drivers from driving in congested traffic on an expressway when travelling slower than 50 kilometers per hour.

The system automatically accelerates, brakes and steers while monitoring the vehicle's surroundings, using data from high-definition mapping and external sensors.

The driver, meanwhile, can enjoy the vehicle's infotainment using the navigation screen but must respond to the system's request for a handover when the vehicle speeds up after the traffic jam eases.

"The driver and the system will share the driving task," said Sugimoto. The Traffic Jam Pilot is the "first step for it, and we would like to assess how autonomous driving is welcomed at the Japanese market."

Honda is taking a cautious approach to introducing this cutting-edge function. Only 100 units will be produced, available only for lease sales. The model is priced at 11 million yen ($102,000).

Another reason for the limited run is the need to "explain this new technology clearly," said Kimiyoshi Teratani, who manages Honda's Japan business, adding that leasing would allow regular and thorough maintenance.

Honda said it simulated around 10 million possible situations, and conducted test drives on highways for approximately 1.3 million kilometers, in developing the car.

It also set the speed limit much lower than the 60 kph allowed by regulations.

The level 3 technology "is what will be needed in the future for sure," said Sugimoto. He said it would eventually be distributed "hopefully in a decade or two" for one of Honda's top-selling models.

The car also offers various "level 2" driving assistance features, such as hands-off driving when following a car in front within a lane or changing lanes. The model is also equipped with an emergency stop system, which decelerates and stops the car at a safe place if the driver remains unresponsive to a take-over request. So-called level 4 mobility services are already provided or largely tested by players including Waymo, owned by Google parent Alphabet, and China's Baidu. Such services do not even require a driver in theory.

With Germany's Mercedes-Benz also set to launch a model with level 3 autonomy later this year, the market for self-driving personal vehicles is likely to heat up.

Fuji Chimera Research Institute, a market research company, expects that such level 3 technology will be more broadly applied from around 2030 and that almost 43 million vehicles globally will have such technology by 2045.

The Japanese government has been upbeat about pushing forward with autonomous driving. It introduced a revised legal framework in April 2020 to make the car, instead of the driver, responsible for the driving.

The World Forum for Harmonization of Vehicle Regulations has also adopted the Traffic Jam Pilot technology as a global standard.

"There is a tremendous difference between level 2 and 3, involving a question of who will be responsible at an accident: the system or the driver," he said. Although he acknowledges it is too early to judge if other companies will follow, "Honda believes the importance of being the front runner," Sugiura added.

Takaki Nakanishi, the CEO of Nakanishi Research Institute, said that while it was meaningful for Honda to be kickstarting a new market for autonomous driving for personal cars, the sensors on the car cost millions of yen.

"If the driver helps supervising the driving [as in level 2 technology], driving assistance functions can be offered at a much cheaper price," Nakanishi said. "The limited features of level three 'minus' may not be worth the cost if we compare it with level two 'plus' we have today."