Honda's self-driving car: A smooth ride when all goes right TOKYO -- Level 3 autonomous driving promises to let drivers take their hands off the wheel and their eyes off the road under certain conditions. So how does Honda Motor's Legend sedan -- the first passenger car on the market equipped with this technology -- deliver on that promise?

To answer that question, a fellow Nikkei reporter and I, accompanied by a Honda engineer, took the Legend for a spin on the Tokyo expressway.

Apart from the prominent "automated drive" sticker on the back, the sedan looked much like any other passenger car on the road. And while my colleague navigated city roads, it handled much like one as well.

Once on the highway however, we were eager to see how the Traffic Jam Pilot -- which makes the car, and not the driver, responsible for driving -- would operate. The feature is supposed to kick in at speeds below 30 kilometers per hour and remain engaged up to 50 kph, turning itself off once the congestion clears and the driver takes over. While the system is engaged, the driver is not required to even look at the road.

Real world conditions, however, got in the way. We entered a tunnel almost as soon as the traffic jam started, which prevented the feature from engaging.

"The car was unable to assess its location," the engineer explained.

Cameras and dozens of sensors, including millimeter-wave radar and light detection and ranging, or LiDAR, sensors, assess the environment surrounding the vehicle, while high-definition mapping and GPS deliver information on its precise location. The navigation screen on the dashboard shows cars in front of and next to the vehicle.

In a tunnel, capturing this information is more difficult, the engineer said. "If the system detects its position and the surrounding environment before entering the tunnel, it works without an issue."

By the time we exited the tunnel the congestion had eased, so the Traffic Jam Pilot function did not kick in. But with the press of a button the driver was able engage other features, under level 2 self-driving technology -- also known as driver assist technology -- which allowed him to take his hands off the wheel and leave the acceleration and braking to the vehicle. The driver was still required to monitor the road, however.

A blue light on the steering wheel switches on to indicate that the driver assist system has been activated. The Legend automatically follows the car in front of it and can even overtake it if the car is moving slower than the speed set in the system by the driver.

While the tunnel situation prevented the self-driving from engaging, this time the car seemed almost too eager to help: On several instances, the driver requested the vehicle return to the slow lane, but it soon went back to the passing lane to overtake a car in front of it.

Another patch of congestion -- this time not in the tunnel -- gave the vehicle a second to chance to employ its Traffic Jam Pilot. It worked flawlessly, but soon another limitation of level 3 technology revealed itself. Once the system took over the driving, we began watching television on the navigation screen. But as soon as the driver tried to take out his smartphone, the Honda engineer stopped him.

"We don't encourage the driver to use smartphones or any other devices except the infotainment system." This is because the navigation screen can display a warning if the driver does not respond to the turnover request, he said. Although Japanese laws enacted in April 2020 do not prohibit the use of smartphones or reading when the car is in charge of driving, Honda has been careful to emphasize safety.

The car also watches the driver constantly. An interior camera with near-infrared rays checks the direction of the driver's face, their movements, and even whether their eyes are open, to assess if they will be able to respond immediately to a request to take the wheel. An emergency braking system that gradually decelerates and stops the car in a safe place kicks in if the driver is unresponsive.

During the traffic jam, our car followed the vehicle in front of it smoothly, without any sudden change in speed. When the car accelerated again after congestion eased, a notification sounded and lamp at the steering wheel turned orange to request a takeover. 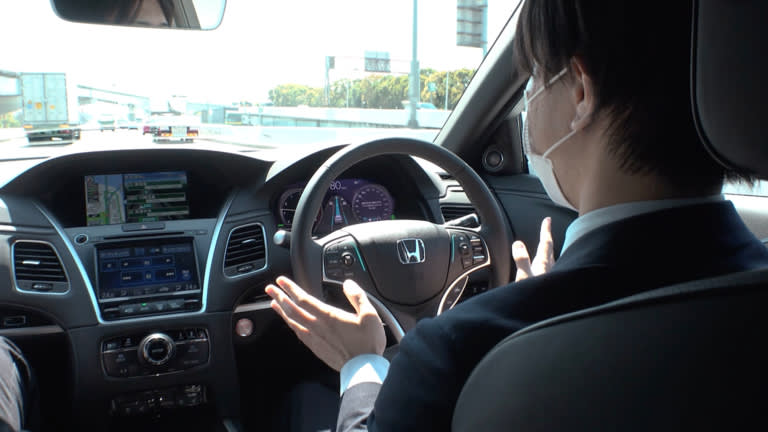 In Honda's latest Legend sedan, a blue light on the steering wheel switches on to indicate that the driver assist system has been activated. (Photo by Ryuji Nishijima)

The nearly one-hour ride went by quickly. But while it was a comfortable experience on the whole -- especially for the passengers -- the frequent rotation between normal, hands-off and eyes-off driving meant it was difficult for the driver to really relax.

The Traffic Jam Pilot, moreover, struggled with more than just tunnels. It also failed to engage near low curbs and in areas close to intersections.

Yoichi Sugimoto, who oversees automated driving and driver assistance technologies at Honda R&D, stressed that this is a result of prioritizing safety, and said range of operable conditions will be gradually expanded as location-detecting technology improves.

Improvements in transmitting information about the driver to the system will also be necessary to enable the greater use of hands-off/eyes-off driving.

"What we are confident about with our technology is that we have adequately tested safety for personal-use cars," Sugimoto said, adding that Honda simulated several million scenarios that could lead to an accident.

"This technology is also beneficial when developing level 4 autonomous mobility services. We are in a leading position in this regard," he said. In level 4 systems, the vehicle can take over all driving tasks in certain circumstances.

Honda says the latest Legend will be delivered to customers from May. Only 100 units will be available, and only on a lease basis. Customers must also sign a contract of safety protocols before leasing the car.

"The most important part of this technology is the takeover of the driving tasks," said Hitoshi Aoki, who is in charge of the Legend development at Honda. "Misuse by customers can lead to accidents," he warned.