TOKYO -- Prompted by the COVID-19 pandemic, consumers are increasingly buying online, even big-ticket items like new cars that they previously purchased only after they had a chance to inspect the merchandise themselves.

Japan's Honda Motor is the latest automaker to sell its cars online, a move that could create new contact points with younger customers but also throws the traditional role of dealerships into question.

Honda on Oct. 4 began allowing drivers to use their smartphones to select their desired model and options, receive an estimate, and sign a purchase contract. It is the first big Japanese automaker to sell new cars over the internet.

Dubbed Honda On, the store offers lease-like monthly subscriptions to the N-Box minicar, Fit compact and two other popular models. The subscription includes the cost of automobile inspections and tax. Customers pick up their cars at a nearby dealership, where they also go for maintenance. The service is only available in Tokyo for now but will gradually be expanded, the company says.

Honda said in a statement that it has made the service "easy to use for Generation Z customers who have never visited a dealership and feel that the bar is too high."

Sanshiro Fukao, a senior fellow at the Itochu Research Institute, says demand for online sales is high among younger car buyers. "Many young drivers often say they don't want to negotiate over price with dealers face to face," Fukao said. He added that this mindset presents a challenge to carmakers: How can they seamlessly offer digital experiences to Gen-Z and millennial buyers?

Others are following Honda's lead. Nissan Motor this winter will allow its new Ariya SUV to be sold online in Japan. It started a program that allows customers to purchase new cars online from Nissan dealers in the U.S. last December. In February, Toyota Motor also launched a similar service in the U.S.

It was already common before the pandemic for drivers to go online to research what new car they might be interested in and use third-party automotive marketplace websites to buy used cars. COVID-19 quarantines forced dealerships to close their doors and broaden their online services. Now shopping online for new cars has become a trend in the U.S., China and other markets.

Amid the upheaval in the automobile retail landscape, some brands are cutting dealerships out almost entirely.

"The process was extremely simple, like buying a laptop. You fill out the Tesla forms, get financing, and pick up the car a few weeks later," said Jake Seliger, a grant-writing consultant based in the U.S. city of Phoenix, who bought his first Tesla, a crossover Model Y, in March.

"Car dealers typically make buyers sit around and then try to stick a few hundred dollars of random upcharges on to the bill, [but] Tesla showed the full cost of the vehicle online," Seliger said. He took test drives of a Model 3 and a Model Y at a Tesla showroom before buying.

Tesla, a pioneer in online and direct consumer auto sales, announced in 2019 that it would sell its models exclusively online, closing most of its showrooms and laying off retail employees.

Elon Musk, the company's CEO, said the move would help the U.S. manufacturer of electric cars cut operating expenses and avoid local laws that have prevented it from operating its own dealerships in certain U.S. states.

Chinese luxury carmaker Lynk & Co is trying to create a new car buying experience. Established in 2016 by Geely Auto Group and its Swedish subsidiary, Volvo Car Group, Lynk & Co not only uses a direct-to-consumer online sales model with monthly subscriptions, but owns showrooms -- the company calls them "clubs" -- in Europe that double as community spaces. 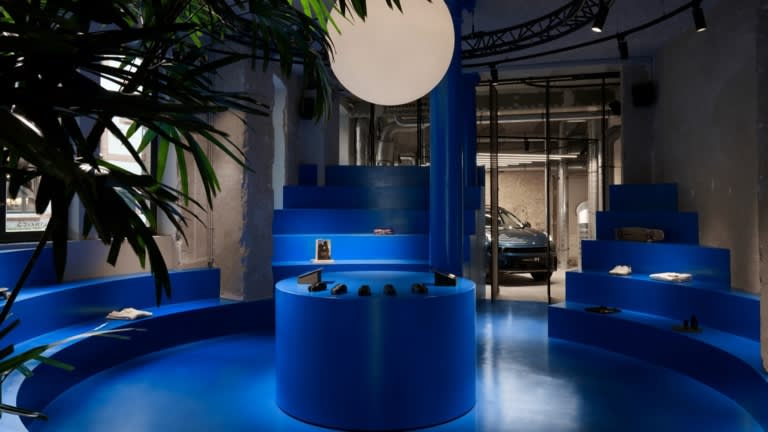 Instead of serving solely as dealerships, Lynk and Co showrooms double as concert venues, retail shops for apparel brands that share its ethos of sustainability, and coffee lounges where other drivers of its cars can meet. Volvo handles the maintenance. The company, which opened Europe's fourth club in Berlin last month, said it has pulled in 25,000 new members, topping its target for 2021 of 9,000.

"Lynk & Co Clubs are a creative take on experiential retail, trading in pushy salespeople for a warm, no-pressure experience," the company said in a statement. "You can test drive the 01 [compact crossover SUV] and sign up for a membership at the Club, but gone are the days of car-centric showrooms."

The push for online sales by some carmakers might lead some to wonder whether dealerships' days are numbered. But Itochu Research Institute's Fukao argues they will remain valuable to drivers, enhancing the digital tools carmakers offer online.

"The technology offers more contact with customers, so instead of focusing on vehicle sales, [dealers] can shift their efforts to insurance, vehicle inspection and other long-term businesses for their profit," Fukao said, adding that knowledge of local markets is an advantage that global automakers do not have, pointing to ways they can enhance their after-sales service.

Akihiro Muto of ABeam Consulting said in a note in September that it will be vital for car dealers to put more emphasis on customer relationships, as online sales will allow manufacturers to handle every step in the car buying process up to signing a sales contract -- traditionally a key function of dealerships.

"If brick-and-mortar dealerships are considered only as locations for sales and car maintenance, they will be replaced by large repair shops connected through vast networks, and eventually such stores will be shattered," Muto said in his note. Dealerships can offer a place for local residents to gather, showcasing products and services other than cars. The spaces could be turned into coffee shops or any other type of physical location that embodies the brand's values, he said.