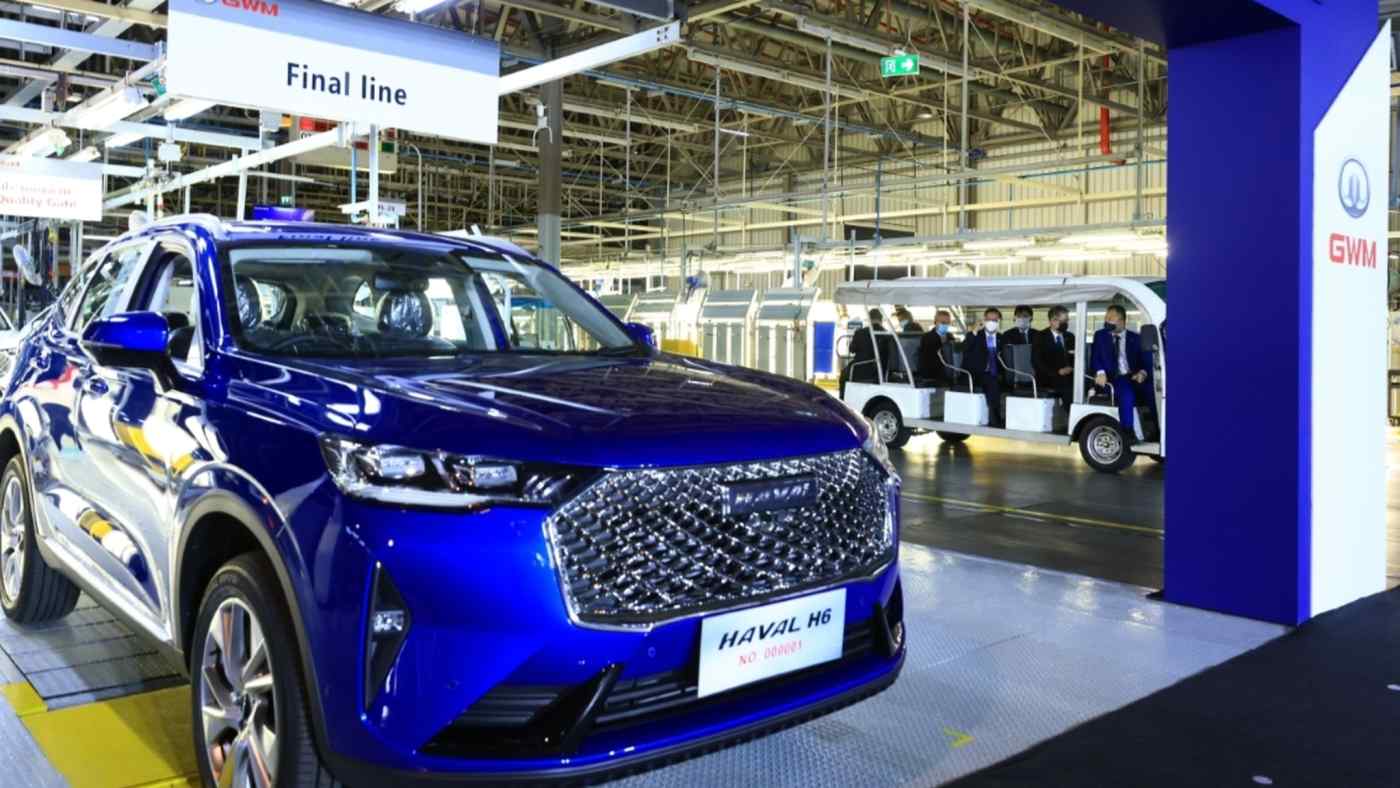 BANGKOK -- When China's Great Wall Motor rolled out the Haval H6 hybrid sport utility vehicle in Thailand last month, the slogan for the launch -- "It's time to change" -- seemed to throw down the gauntlet to the Japanese companies that enjoy a near-monopoly in Southeast Asia.

Great Wall is among the Chinese and South Korean automakers capitalizing on efforts by Thailand and Indonesia to push electric vehicles, threatening to leave behind Japanese rivals reluctant to abandon internal combustion engines.

About 90% of vehicles made and sold in Thailand come from Japanese manufacturers, but most are fueled by gasoline. Great Wall looks to carve out a foothold with nine electrified models over the next three years, including some that are fully electric.

The Chinese company jumped fully into the Thai market with the acquisition last year of a plant from the departing General Motors. Great Wall invested more than $700 million to turn the facility into a smart factory with artificial-intelligence-powered production lines, which began making hybrids in June and is set to start production of electric models by 2023.

The upgrade took advantage of a Thai government program offering an eight-year corporate tax exemption for electric vehicle projects. The country aims to make 30% of locally manufactured vehicles electric by 2030.

Thailand, one of Southeast Asia's largest auto markets, has been relatively slow to go electric.

No major automakers manufacture electric models locally, and just 1,400 units were sold nationwide last year, of which about 60% were imports made by SAIC Motor. The Shanghai-based company plans to produce electric vehicles here through a joint venture with Thai conglomerate Charoen Pokphand Group. The Japanese contingent's electric offerings are limited to a few imported models such as Nissan Motor's Leaf and those under Toyota Motor's Lexus luxury brand. While Mitsubishi Motors looks to begin making electrics in Thailand in 2023, hybrids are still favored overall, in light of the country's low incomes and lack of charging infrastructure.

"Chinese players are certain to fill the gap and gain market share with inexpensive electrics," said Hajime Yamamoto of the Nomura Research Institute.

Great Wall will initially import its Ora electric compact, which goes for less than $10,000 in China after subsidies, and is expected to switch to local production of the car after cultivating demand.

In Indonesia, Southeast Asia's other big auto market, Hyundai Motor is set to bring a $1.6 billion plant for gasoline-powered cars outside Jakarta online this year. The facility will start turning out electrics as early as 2022, according to local media.

Hyundai decided to move forward with the project in November 2019, around the same time that Indonesia and South Korea signed an economic partnership agreement. The deal made auto parts from South Korea tariff-free, enabling South Korean automakers to compete on a level playing field with Japanese cars.

The Indonesian government in 2019 set a goal of having electrics account for 20% of the country's auto output. But Japanese automakers had previously expanded production there after the government began offering incentives for green vehicles in 2013, and are leery of embarking on another round of big investments. This gave Hyundai room to jump in.

There is frustration in both Bangkok and Jakarta with the reluctance of Japanese automakers to get on the electric bandwagon.

When the Thai government began weighing a more ambitious target, the auto division of the Japanese Chamber of Commerce in Bangkok urged a more cautious, phased-in approach.

The group argued that Thailand's continued reliance on fossil-fuel energy means that electric vehicles alone will not make much of a dent in emissions. Indonesia faces a similar problem.

Even so, if Japanese automakers do not keep up with the investments made by their Chinese and South Korean counterparts, they risk losing out as Japanese home-appliance and mobile phone makers did before them.