SEOUL/NAGOYA, Japan -- Two black shipping containers bearing the Hyundai logo sit side by side in a corner of a thermal plant run by a power company in the South Korean city of Ulsan.

The boxes hold fuel cell systems of the same type used in Hyundai Motor's hydrogen-powered Nexo sport utility vehicle. Each container is a generator with a capacity of 500 kW, enough for 1,100 average households, according to the automaker.

The pilot project is part of Hyundai's efforts to rev up demand for fuel cells by marketing them beyond the auto industry. Stoking demand for these core systems could make production more cost-effective -- giving the company an edge over rival Toyota Motor -- and promote the infrastructure needed for the technology to spread.

The test run for the compact power plants at the Ulsan facility, which began in January, aims to take advantage of the city's hydrogen production. Ulsan, a petrochemical industry hub, generates 820,000 tons of hydrogen per year as a byproduct of refining, about half the country's total from that source.

"It's an optimal energy source for South Korea, which is poor in natural resources," the manager of Hyundai's hydrogen energy development team said. If the test run goes well, the company plans to introduce the hydrogen generators elsewhere in South Korea and abroad. The South Korean company looks to expand production of fuel cell systems as well. Affiliated parts maker Hyundai Mobis looks to bring a second plant at its Chungju facility online in 2022, increasing capacity more than tenfold to 40,000 units per year.

The group also is working on a factory in Guangzhou, slated to open in 2022 as well, that will be able to churn out about 6,500 yearly. Hyundai aims to supply fuel cell systems not only to Chinese automakers, but also to manufacturers of products such as industrial equipment and drones.

Hyundai had focused on developing and producing fuel cell systems for its own vehicles. The move to broaden its customer base -- including to rival automakers -- illustrates the company's hopes for growth in the hydrogen market.

This clean-burning fuel is expected to enjoy stronger demand amid the global pivot away from fossil fuels. Tokyo-based Fuji Keizai forecasts the worldwide market for fuel cell systems to reach 4.96 trillion yen ($45.5 billion) in fiscal 2030, ballooning by a factor of 18 from fiscal 2019.

But hurdles have hindered hydrogen's spread. Besides safety concerns, observers cite a chicken-and-egg problem: Infrastructure is needed to promote broader use of hydrogen energy, but little incentive exists to build this infrastructure without demand for the fuel. 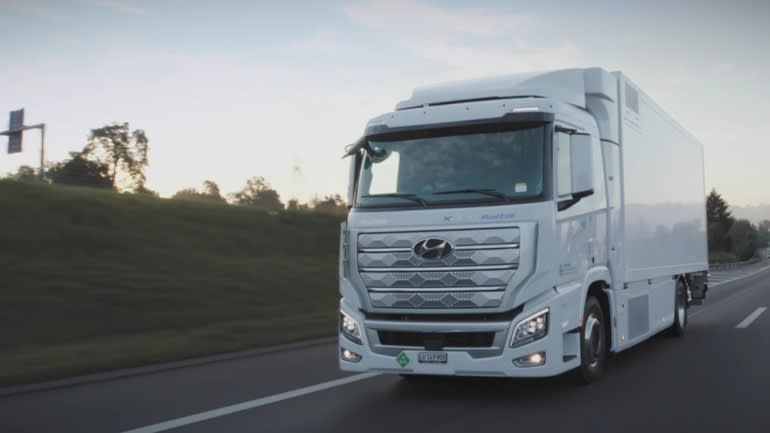 Hyundai looks to bring down the cost of fuel cells for vehicles like this truck. (Photo courtesy of Hyundai Motor)

Hyundai's solution is to ramp up fuel cell supply while cultivating demand at the same time, bringing in other industries to accelerate the pivot, in a bid to solidify a leading role in the hydrogen market.

The automaker also hopes that larger-scale production of these systems will help slash the price of the fuel cell vehicles at the heart of its business. The Nexo carries a hefty price tag of roughly $60,000, and the company sees lowering that figure as key to promoting fuel cell autos.

Hyundai has been a major driver of the field, along with rival Toyota. The South Korean automaker dominated global sales of hydrogen vehicles last year with a 69% share, with Toyota a distant second at 17% and Honda Motor in third at 3%, according to South Korea's SNE Research.

Toyota jumped into the lead last quarter after the release of its new Mirai model in late 2020. But Hyundai remains confident, as suggested by its decision to reenter the Japanese market -- Toyota's home turf -- next year with fuel cell and electric vehicles.

Globally, Hyundai looks to introduce 12 electric models and increase its annual sales of electrics to 560,000 by 2025. The automaker announced plans in December to boost research and development spending on electrification and hydrogen over the next five years to 14.9 trillion won ($13.2 billion), up 40% from its previous plans.

"The two power sources can coexist" given their differing characteristics, an executive said, referring to variances in areas such as range and charging or fueling time.

Hyundai is partnering with other companies involved in the hydrogen business, including steelmaker Posco and SK Group, to establish an ecosystem for hydrogen production, supply and fueling more quickly.