In Ford battery deal, SK aims to make up ground in U.S. market SEOUL/TOKYO -- SK Group and Ford Motor will build new battery factories in the U.S., the companies announced Tuesday, as the South Korean conglomerate seeks to make up ground with compatriot and competitor LG Chem and its partner General Motors in a crucial market.

Battery maker SK Innovation will work with Ford to open production sites in the states of Kentucky and Tennessee at a total cost of $11.4 billion, with SK investing $4.45 billion. The South Korean company is also preparing to begin mass production at a Georgia site next year.

The initiative is under the umbrella of the BlueOvalSK joint venture announced by Ford and SK in May.

SK and peers are setting their sights on the U.S. as steps by President Joe Biden's administration to combat climate change promise to push forward electrification of large vehicles like pickup trucks, creating unique opportunities in one of the world's biggest markets.

An executive order signed by Biden in August sets a target of zero-emissions vehicles accounting for half of all sales by 2030. The administration looks to earmark $174 billion for a plan that includes sales subsidies and incentives to build domestic supply chains.

SK was only the world's sixth-largest battery company by market share last year, with 30 gigawatt-hours spread across facilities in South Korea, China and Hungary, well behind LG at No. 2. 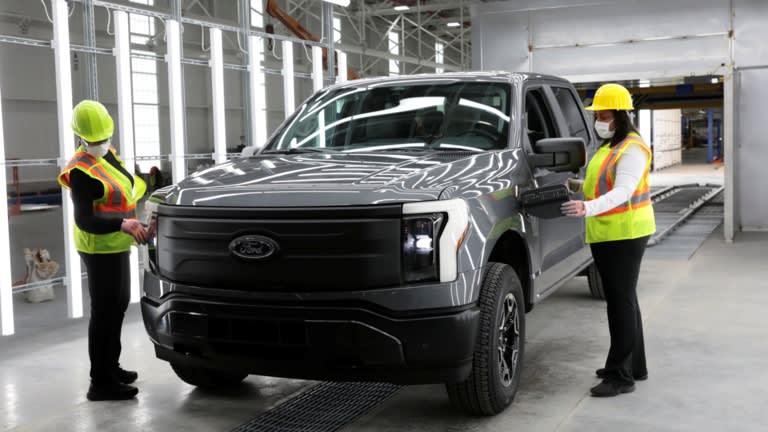 But it aims to move up in the ranks with a boost from its U.S. projects. The Georgia plant will be able to produce 21.5 GWh a year, and the Tennessee and Kentucky sites set to come online in 2025 will have 43 GWh and 86 GWh in capacity, respectively.

Ford will build an assembly plant for its F-series pickup trucks alongside the Tennessee battery factory.

Other automakers besides Ford are joining hands with battery companies on new North American factories in anticipation of rising demand for electric vehicles. The size of the projects in the works reflects American consumers' penchant for bigger models that will require high-capacity batteries.

GM aims to sell more than 1 million electric vehicles a year by 2025 and eliminate gasoline-fueled cars from its lineup entirely by 2035. To power this electrification push, it is working with LG to expand battery production, with plans for four North American plants producing the automaker's proprietary Ultium batteries.

Capacity of these packs ranges from 50 to 200 kilowatt-hours -- larger, for instance, than the 66 kWh and 91 kWh options for Nissan Motor's new Ariya sport utility vehicle. Batteries of different sizes can be swapped in and out.

Netherlands-based Stellantis, formed by the merger of Fiat Chrysler Automobiles and France's PSA Group, will invest 30 billion euros ($35 billion) in electrification through 2025, including additional battery production. 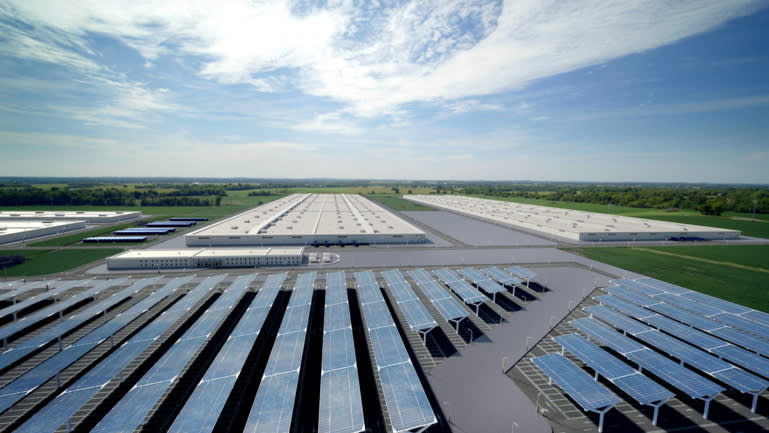 SK Innovation and Ford plan to build a battery plant, shown here in an artist's rendering, in the U.S. state of Kentucky. (Ford via Reuters)

The U.S. is a central target of SK's plans to pour 30 trillion won ($25 billion) into its battery business worldwide by 2025. The company hopes that capitalizing on the electrification of pickup trucks and demand for the high-capacity batteries they need will provide a boost in its race to catch LG.

Fueled by the massive investment, "we will rise to the world's top three by late 2022," said Jee Dong-seob, the head of SK's battery business. To raise funds to cover the spending, the group on Friday will spin off the operation, provisionally named "SK Battery," so that the unit will list on the stock market at an early date.

However, SK will have to contend with three powerful rivals in terms of market share: China's CATL, LG and Japan's Panasonic. Tesla has partnered with CATL in China and with Panasonic in the U.S. Honda Motor has invested in CATL.

SK plans to build five factories in five years, but the group is unable to secure enough personnel and it remains unclear whether production capacity will expand as anticipated.

Recently, unwanted attention has erupted surrounding product quality issues with vehicle batteries. Rival LG recorded a roughly 700 billion-won extraordinary loss after covering most of the costs of a recall of Hyundai Motor EVs. LG faces a strong likelihood that it will shoulder at least part of the costs of General Motors' recall of EVs with potentially fire-prone batteries.

Research and development into safer solid-state batteries and other next-generation options will be essential for stable growth. Too strong a focus on meeting sharply rising battery demands at the expense of R&D and product quality may create an unexpected pitfall.