In South Korea's car industry, it's Hyundai, Kia and the also-rans

Renault Samsung has suffered a sharp drop in production at its sole plant in Busan as the French parent has reduced outsourcing to its South Korean unit.
KOTARO HOSOKAWA, Nikkei staff writerMarch 13, 2021 12:00 JST | South Korea
CopyCopied

SEOUL -- The gap between winners and losers in South Korea's auto industry is widening as Hyundai Motor and its affiliate Kia Motors leave their weaker rivals in the dust.

While earnings at Hyundai and Kia are recovering from the downturn brought on by the COVID-19 pandemic, GM Korea, the local subsidiary of General Motors, Renault Samsung Motors and SsangYong Motor, which is owned by Indian automaker Mahindra & Mahindra, are struggling to stay afloat. The pandemic has underscored the diverging fortunes of the two leaders and the laggards.

SsangYong Motor filed for court receivership in December 2020, while Renault Samsung saw its production plunge 31% last year as one of its biggest manufacturing contracts expired. On Feb. 3, SsangYong's Pyeongtaek plant suspended operations due to "disruptions caused by parts suppliers' refusal to deliver products," according to the carmaker. The company was unable to meet demand for cash payments from suppliers. The plant has since restarted, but still shuts down from time to time due to a shortage of components. 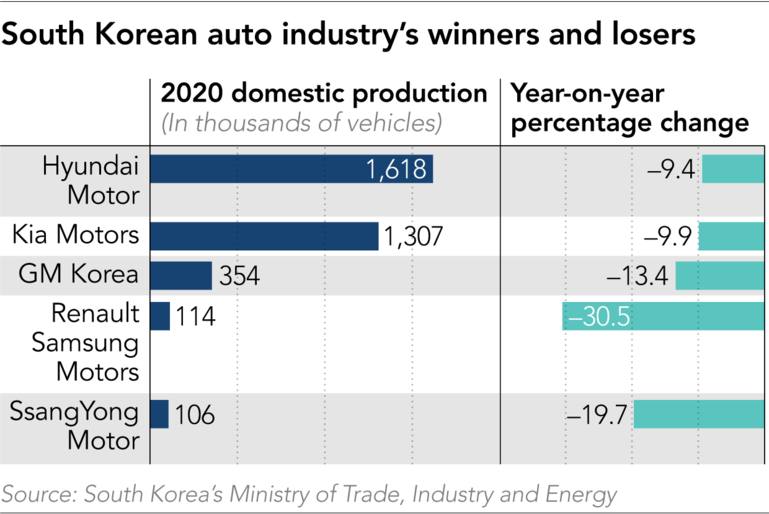 SsangYong was forced to cease production for the same reason late last year. Worries about its creditworthiness grew after it missed loan repayments and sought a reprieve by filing for receivership with the bankruptcy court in Seoul on Dec. 21.

Mahindra & Mahindra, which owns 75% of SsangYong, and its main creditor, Korea Development Bank, are looking for sponsors. The Indian parent said it will help put the South Korean automaker back to its feet by striking a quick deal with stakeholders. But negotiations over the company's restructuring are not going well as the troubled company failed to attract much interest from potential investors.

During the past two decades or so, SsangYong Motor has lurched from one setback to the next. After the SsangYong conglomerate fell victim of the 1997 Asian currency crisis, the group's key automaking unit was sold to China's SAIC Motor in 2004. But SsangYong failed to gain traction and was put into receivership in 2009.

It was sold to Mahindra in 2011 and has since been trying to turn itself around, to little avail. Its output in 2020 plunged 20% from the previous year to 106,000 vehicles. A shortage of capital has hobbled its efforts to roll out new models, further depressing sales. Unless a new sponsor emerges, the company could drift toward liquidation, said one industry observer.

Renault Samsung, which is 80% owned by Renault of France, posted an even steeper decline in production. Since it was sold by the Samsung group to the French automaker in 2000, it has maintained output by manufacturing cars for the Renault group. It used to produce about 100,000 Nissan Rogues a year at its sole factory in Busan, but the French-Japanese alliance discontinued the contract last year as part of its groupwide restructuring, causing Renault Samsung's output to sink 31%.

One factor behind Renault's decision to let the contract expire was the plant's combative labor union. The union moved forward with a strike even as the company was negotiating with its parent to find replacement models to produce, baffling Renault executives. With the negotiations for a new contract going nowhere, the outlook for the automaker remains murky. SsangYong Motor suspended production in February at its plant in Pyeongtaek, 65 km south of Seoul, after the automaker failed to meet suppliers' demand for cash payments.

Although GM Korea has seen a smaller drop in production, it is also at a crossroads. GM has announced that it will stop making gasoline-powered vehicles by 2035. GM's plant in South Korea has never produced electric vehicles, which means the local subsidiary could face a sharp drop in output as its parent shifts its focus to EVs.

Like Renault Samsung, GM Korea has been beset by its militant labor union. Workers walked off the job as the company was going through a rough patch, prompting GM's management to postpone an investment of some $180 million to produce a new SUV. Because domestic demand alone is insufficient to keep the company in the black, it faces tough negotiations with its U.S. parent.

One common thread for the weaker producers is a failure to adapt to the shift to CASE -- connected, autonomous, shared and electric -- mobility.

Despite their affiliations with big global carmakers, Renault Samsung and GM Korea are grappling with uncertainty due to their parents' restructuring. The outlook for SsangYong, which makes a little over 100,000 vehicles annually, also remains bleak.

Even Hyundai, the country's top automaker, and affiliate Kia have had to team up with foreign manufacturers to secure the research and development funds needed in a changing industry.