MUMBAI/NEW DELHI -- Indian automakers have cut about 345,000 jobs in recent months as showrooms have closed and passenger car production has been slashed amid the industry's worst slump in nearly two decades.

Sales of passenger vehicles sank 31% on the year in July to 200,790 units, marking the ninth straight month of declines, data issued Tuesday by the Society of Indian Automobile Manufacturers showed.

Vishnu Mathur, director general of the manufacturers society, said there was an urgent need for the government to support the sector, saying the July decline was the steepest since a 35% drop in Dec. 2000.

"Jobs of about one million workers are at risk," he told broadcaster NDTV.

Analysts attribute the drop in demand for cars, especially in the past year, mainly to a credit crunch triggered by a crisis in India's non-banking financial sector, as well as tougher environmental regulations and increases in insurance and registration costs. But ride-hailing options have also been blamed for undermining sales. 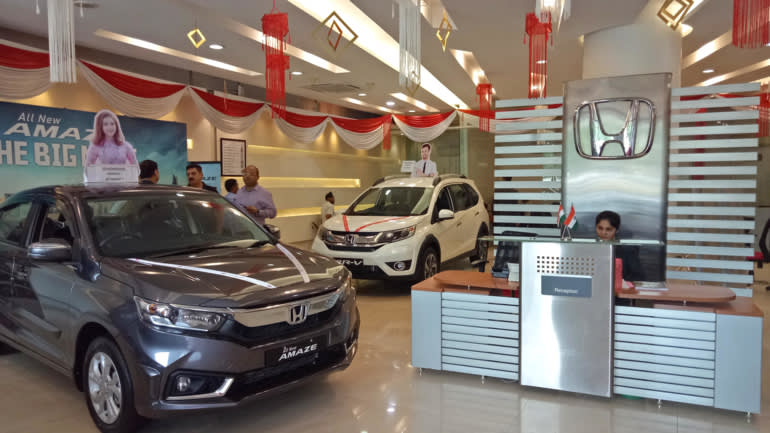 A Honda dealership in Mumbai. Showrooms are closing in India as new-vehicle sales continue to fall. (Photo by Rosemary Marandi)

Major carmakers such as Maruti Suzuki India, Tata Motors and, Mahindra and Mahindra have announced temporary production cuts amid a serious slump in profits for the April-June quarter.

Mahindra said in a securities filing Friday that the company would schedule eight to 14 "no production days" at various auto plants in the July-September quarter "as part of aligning its production with sales requirements."

Additionally, about 300 dealerships have closed in recent months as both inquiries and foot traffic declined drastically.

A worker at a Honda dealership in Mumbai said sales at two showrooms have been poor with just 20 vehicles sold so far this month compared with 111 vehicles sold in July. The man recently switched showrooms after fearing for his job at the previous location, which was firing employees.

The automobile association's Mathur said nearly 350,000 temporary and casual workers in the automobile industry are estimated to have been laid off -- 15,000 by vehicle manufacturers, 100,000 by component makers and 230,000 by dealers.

Brokerage SBI said in a recent report that of the five factors at the root of the slumping auto sales, a decrease in nonbank lending carried the most weight.

Some analysts, however, list factors such as congested cities and the presence of car-ownership alternatives, such as ride-hailing apps Ola and Uber, for the slowdown in demand in the auto sector, which contributes more than 7% to the gross domestic product in Asia's third-largest economy.

"All those are secondary things. Unless you are a subprime borrower [an individual considered to have relatively high credit risk for a lender], banks don't have any problem in lending... and in the car market, there is hardly any subprime borrowers," said Deepesh Rathore, an auto industry analyst, and director at consultancy Emerging Markets Automotive Advisors. "As a result, new buyers are hesitant in entering the car market as there are a number of other services that can actually substitute -- you can rent a car today or you can actually rely on a daily basis on cab aggregators like Ola or Uber."

In a recent meeting with Nirmala Sitharaman, the finance minister, industry leaders urged the government for a stimulus package, including an immediate reduction in goods-and-services tax rates from 28% to 18%.

Late last month, the manufacturers society expressed concerns over a government plan to increase registration charges for new vehicles, saying such a move would lead to a new truck or bus registration fee reaching 20,000 rupees ($280) from the current 1,500 rupees, as well as 1,000 rupees for a new two-wheeler instead of 50 rupees. Similarly, the registration fee for a new car is proposed to rise to 5,000 rupees, up from 600 rupees.

The government has been slow responding to the demands, although it says it is engaged in constructive talks.

Prime Minister Narendra Modi, in an interview with the Economic Times published Monday, said the Finance Ministry has had a constructive dialogue with the automobile industry.

"I would like to assure everyone that India has a large enough market and big enough policy space to ensure the growth of internal combustion engine-based automobiles as well as electric vehicles. There is no need to speculate about the growth of either of the two," Modi said, adding that both types of vehicles can coexist in the industry.

Modi's words were perhaps the first time that government has also spoken about the growth of internal combustion engine vehicles amid a push for more electric vehicles to cut pollution and fuel costs.