NEW DELHI -- India's automobile industry is optimistic of a pickup in sales in the current festive season after the sharp slump in 2019 and production and supply disruptions this year due to the COVID-19 pandemic, but company leaders say the true picture of recovery would only become clear next year.

The country's top-selling passenger carmaker Maruti Suzuki India and third-largest Tata Motors said demand during the current festive season has helped. The festive season started in mid-October and will last until Diwali, the country's biggest Hindu festival, which falls on Nov. 14. Maruti is majority-owned by Japan's Suzuki Motor.

There was "no production at all" for almost two months in the first quarter of the fiscal year that began in April, R.C. Bhargava, chairman of Maruti Suzuki, said on Thursday during a media briefing on the company's July-to-September earnings which have been "much better" than the previous quarter. "Any comparison between [the first] and [the] second quarters is meaningless."

His comments came as the company reported a revenue of 187.6 billion rupees ($2.5 billion) in the quarter ended in September, up 10% from the same period last year. Its net profit for the quarter was up 2% at 14.2 billion rupees from a year ago.

In the quarter ended in June, the company posted a quarterly loss for the first time since its listing in 2003 at 2.7 billion rupees, which was partially offset by lower operating expenses and higher fair-value gain on the invested surplus. 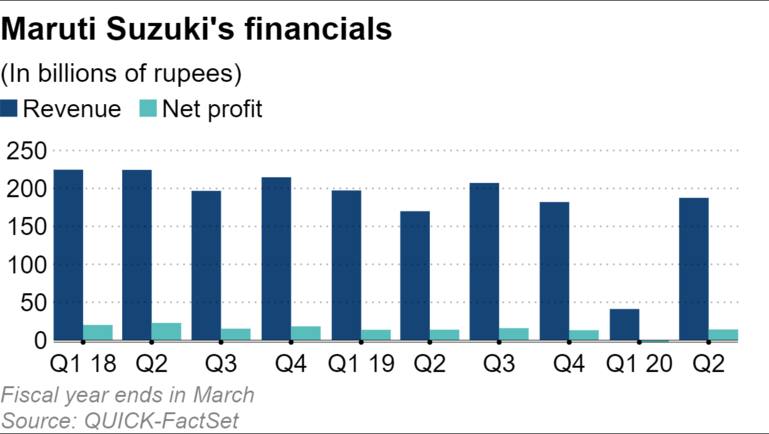 The reason that Maruti Suzuki performed better in the September quarter compared with a year ago was that 2019 "was the year when Maruti went down 16% [and] the industry went down 18%... and taking that as the base [the performance in the second quarter of the ongoing financial year] is unsurprising," Bhargava said.

The company's performance in the second quarter of "the last normal year," which was April 2018 to March 2019, was far more accurate. In the quarter that ended September 2018, it sold 455,000 vehicles. He said that the automaker would have sold 530,000 to 540,000 vehicles in the same quarter this year if that growth had continued.

"Certainly, the situation in India has been improving over the last few weeks," Bhargava said, adding that October would be a good month for production and sales, and also November when India will celebrate Diwali. "December is the month when all carmakers go out of their way to minimize inventory with [factories] and dealers and will [offer] all kinds of schemes and discounts. So, I think December will be all right [too]."

After that, the situation "is hard to predict," he said, due to the coronavirus. He declined to make forecasts for the fourth quarter and next year.

Maruti's earnings came after Mumbai-based Tata Motors on Tuesday reported a net loss of 3.1 billion rupees in the quarter ended September, widening from a loss of 2.17 billion rupees the same period last year. 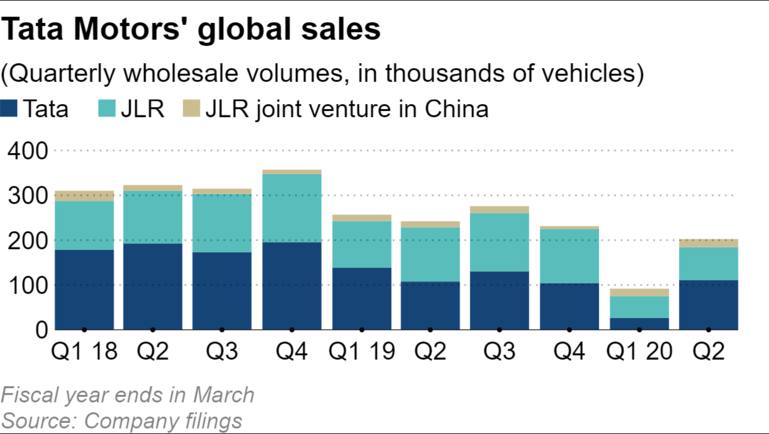 However, its British unit Jaguar Land Rover, which contributes about 80% of its overall revenues, returned to profit for the first time this year "with significant positive cash flow in the quarter." It recorded a profit before tax of 65 million pounds ($84 million), even though its revenues fell 28.5% on the year to 4.4 billion pounds.

"The auto industry continued its calibrated progress [in the September quarter] as the nationwide lockdown eased further," Guenter Butschek, Tata Motors chief executive and managing director, said in a statement.

"In [passenger vehicles] we accelerated the momentum built [in the previous quarter] and saw demand gradually emerge in select segments of [commercial vehicles]. We remain hopeful for a full recovery in CV industry by end of this fiscal year aligned to the overall improvement in the economy," he added.

India's gross domestic product contracted 23.9% in the April-to-June period, the worst quarter on record. Its central bank, the Reserve Bank of India, has forecast that the economy will shrink 9.5% for the fiscal year ending in March.

According to an Oct. 16 note by Care Ratings, the month of September witnessed a sharp surge in domestic wholesale from automobile manufacturers to dealers in segments such as tractors and passengers, hinting at a recovery in the automotive sector.

"However, the actual consumer demand which gets reflected in the retail sales data (which is from dealers to end consumers) is yet to gain some pace," the rating agency said.