NEW DELHI/TOKYO -- As India battles a deadly second wave of COVID-19, the country's automakers are bracing for near-term challenges, although they remain hopeful the industry will bounce back once the coronavirus situation improves.

Most parts of the country are under a lockdown, with car showrooms and retail markets in general remaining closed, except for essentials. The current wave of infections that has swept through the nation of more than 1.3 billion people has seen daily tallies of 400,000 cases, the highest in the world.

"While demand remains strong, the supply situation over the next few months is likely to be adversely impacted by disruptions from COVID-19 lockdowns in India and semiconductor shortages worldwide," said India's Tata Motors, which owns the British luxury brand Jaguar Land Rover, in a stock exchange filing on Tuesday. "We expect [the first quarter of the fiscal year that started in April] to be relatively weak due to this, as well as [to] rising commodity inflation, and expect to improve gradually from the second quarter."

The statement comes as Tata Motors, the country's third-largest carmaker, posted a surprise loss of about 76 billion rupees ($1.04 billion) in the January to March quarter despite a strong performance, owing to costs associated with restructuring at Jaguar Land Rover. However, the company was able to narrow its net loss, which stood at more than 98 billion rupees in the same period last year.

Bloomberg's consensus forecast for the recently ended quarter was for a net profit of 27.74 billion rupees. The carmaker's revenue, meanwhile, jumped 42% on the year to 886.28 billion rupees for the quarter

In a teleconference after the earnings announcement, Tata Motors' Chief Financial Officer P.B. Balaji said the carmaker has shown "a strong, resilient and all-round" performance despite the pandemic. While acknowledging that the current April to June quarter is likely to be "adversely" impacted by the latest wave of the pandemic, he said he expected "a very strong bounce back," as the supply chain and COVID situation improve later. 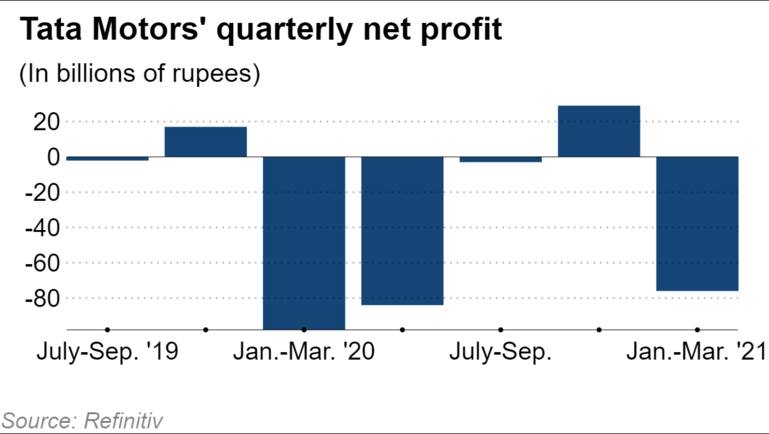 Globally, he said he expected demand to keep improving, pointing to "strong performance" in the U.S. and China. "With more and more [of the] population getting vaccinated, we are seeing now the U.K. and Europe are [also] starting to improve."

Tata Motors' earnings follow those of the country's top selling carmaker, Maruti Suzuki, which is majority-owned by Japan's Suzuki Motor. Maruti Suzuki reported a net profit of 11.66 billion rupees in January to March, down 9.7% over the same period a year ago. The company logged sales of 229.586 billion rupees, up 33.6%.

Commenting on the sector's performance in fourth quarter ended March, Vahishta M. Unwalla, an analyst at Care Ratings said they see automakers reporting "healthy numbers... on the back of a strong volume recovery."

Sales to dealers by manufacturers of commercial vehicles and passenger cars jumped 43.1% and 49.9%, year on year, respectively, while those for two- and three- wheelers climbed 22.2% in the January to March quarter, he said.

"However, margins could be affected due to high input costs of fuel and metals," Unwalla told Nikkei Asia. "Companies which have an exposure to North America and China will be better off, as auto sales have been robust in these geographical markets, supported by [a] reduction in travel restrictions and faster vaccination dives."

Indian companies' Japanese parents have been impacted, too. Suzuki Motor recently declined to give an earnings forecast for the fiscal year through March 2022, as COVID-induced disruptions in India, which accounts for over half of its production, remain unpredictable.

"We can't say clearly about the production plan, because 28 Indian states out of 36 have lockdowns," President Toshihiro Suzuki said at a May 13 news conference, pointing out that around 80% of the company's dealerships in India were closed. Suzuki's Indian unit halted production at three plants on May 1 because it was unable to get parts from suppliers, which diverted oxygen for welding to medical use. The plants restarted Monday.

"As part of the car manufacturing process, Maruti Suzuki uses a small amount of oxygen in its factories, while relatively much larger quantities are used by manufacturers of components. In the current situation, we believe that all available oxygen should be used to save lives," the Suzuki Motor subsidiary said in late April ahead of the plants' shutdown. India has struggled with a severe shortage of medical oxygen for COVID-19 patients. A Tata Motors auto plant on the outskirts of Ahmedabad, India: A recovery for India's carmakers depends on overcoming production challenges, such as lockdowns and parts shortages.   © Reuters

Honda Motor is another Japanese automaker affected by the pandemic and lockdowns in India, and it, too, remains uncertain about their impact on its car and motorcycle production.

"India recovered more [quickly] than expected in the second half of last fiscal year," after the first wave of infections, Executive Vice President Seiji Kuraishi told reporters on May 14, adding that the company will consider carefully when to resume production. Honda earlier this month revealed that over half of its expatriate employees in India had returned to Japan.

In a May 12 statement on the industry's performance in April, the Society of Indian Automobile Manufacturers said sales of passenger cars fell 10.07 % versus March due to various restrictions in states that have seen a surge in COVID-19 cases. Sales of two-wheelers also plummeted 33.52%, while those of three-wheelers slid 57.01 % from March to April.

"Supply chain-related production challenges continue, with the lockdown restrictions in many parts of the country," said the group's director general, Rajesh Menon. "The demand has been clearly impacted by the second wave of COVID-19, both in terms of low consumer sentiments and closure of dealerships due to lockdown restrictions."

India imposed a nationwide lockdown last year that was stricter than the current one, virtually freezing auto production for about two months in the first quarter. The sector showed signs of revival in the final two quarters of the previous financial year as cases declined, restrictions eased and people increasingly opted for personal transportation over crowded public transport.

As of Tuesday, India's total COVID-19 caseload had exceeded 25 million while its death toll stood at 278,719.