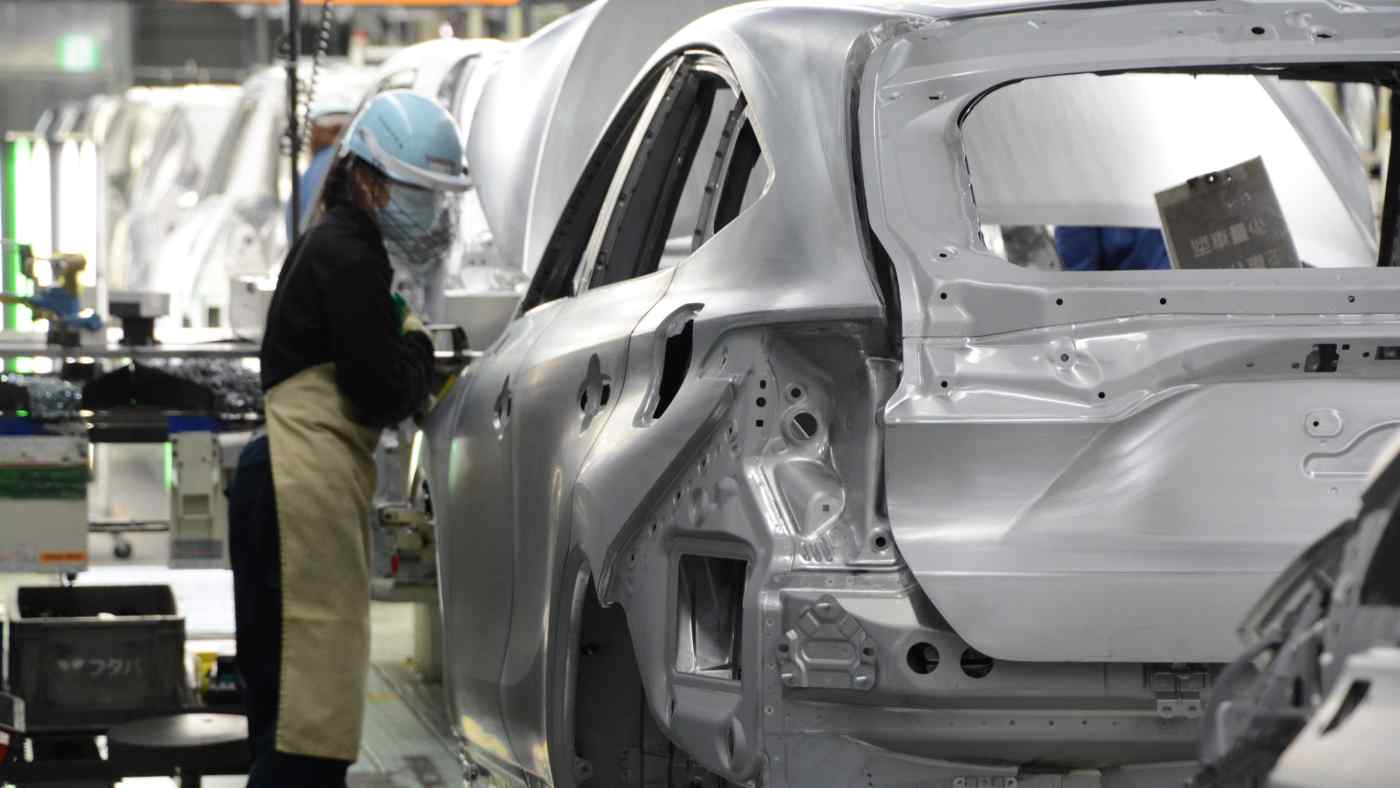 TOKYO -- Six of Japan's big automakers, including Toyota Motor, will cut production plans for the current fiscal year by more than 1 million vehicles, a decrease on the same level as the previous year that saw a major cutback due to the coronavirus pandemic.

The impact of the surge in coronavirus infections in Southeast Asia, which is a major supply base for in-vehicle semiconductors, is the main cause for the cuts, and is also being felt by automakers in Europe and the U.S.

Toyota has revised its global production forecast for the fiscal year ending March 2022 downward by 3% to 9 million units. Nissan Motor has already announced a plan to reduce production by 250,000 units, and Honda Motor expects sales to be lower by 150,000 vehicles, which will be due to production cuts.

But Suzuki Motor is taking the biggest blow. It is reducing production by 350,000 vehicles, or about a 10% last fiscal year's figure. The automaker is struggling to find a steady supply of semiconductors and will suspend operations in countries, including Japan, Thailand and Hungary. Production in India, which accounts for the bulk of its business, is expected to operate at only about 40% of normal capacity this month.

Mazda Motor, Mitsubishi Motors and Subaru have also announced their own cutbacks. As a result, combined cutbacks just for the six companies that have announced them add up to 1.05 million vehicles.

The cuts are due to the shutdown of a STMicroelectronics plant in Malaysia, according to Toyota officials. The Swiss company supplies automotive microcontrollers to Toyota suppliers, but the re-emergence of the coronavirus has prevented employees from coming to work. Because components like brake parts are not being produced, finished cars are not either.

Many component manufacturers have factories in Southeast Asia, which in recent years has also become a production hub for automotive semiconductors. Germany's Bosch has seven plants for electrical components and other products in the region. Fellow German player Continental produces parts using semiconductors at several factories there as well.

The pandemic hit just as the automakers were fighting for these electronic components, compounding the supply shock.

A German company that makes automotive chips, Infineon Technologies, suspended production at its Malacca plant in southern Malaysia for a total of 20 daysduring a five-week period starting in June. The semiconductors are used in steering and brake components that are supplied to automobile parts manufacturers.

STMicroelectronics said has 18-month backlog of orders and is unable to keep up with the demand because factories are not operating as quickly as expected.

"Semiconductor manufacturers have placed assembly and inspection operations in Southeast Asia, where labor costs are low. This is because the processes are labor intensive, but this backfired because of the pandemic," Tomoyuki Suzuki of AlixPartners, a U.S. consulting firm.

The effect is not limited to Japanese automakers. General Motors has suspended operations at eight plants, or 50% of its North American vehicle assembly factories, for one to four weeks starting Sept. 6. France's Renault has also been shutting down some plants in Spain for up to 60 days since the end of August. In late August, Germany's Volkswagen made additional production cuts at its main Wolfsburg plant.

A common reason for the moves is the struggle to procure semiconductors from Southeast Asia.

According to an estimate compiled by a U.S. research firm this month, global automobile production volume in 2021 will fall to about 80 million units, down about 6% from initial projections, amounting to more than $130 billion in lost sales. The effect will be even more serious if cuts as large as Toyota's continue.