Honda researchers observe MRI images displaying the brain activity of a person operating a driving simulator at the National Institutes for Quantum and Science and Technology in the city of Chiba, near Tokyo. (Photo by Kotaro Abe)
KOTARO ABE, Nikkei staff writerJanuary 8, 2022 17:00 JST | Japan
CopyCopied

TOKYO -- Leading Japanese and other automakers are stepping up studies on brain science to improve the safety of their products. Honda Motor, for example, is examining brain activity to analyze drivers' errors and learn their causes using artificial intelligence, while Nissan Motor is trying to use brain waves to assist drivers.

During a Honda demonstration of safety technology it is developing, a prototype car beeped and tightened the seat belt when the driver started heading into a crosswalk where there was a pedestrian, prompting the driver to brake hard. Looking to the sides, he finally noticed a bicycle also entering the crosswalk. As his gaze tracked the bike, the seat belt was gradually loosened.

AI installed in the car took the actions after the driver failed to spot the bicycle, though it was in his field of vision, because he was distracted by the presence of the pedestrian.

Honda's technology gathers data on surrounding conditions through cameras, sensors and other information, including the driver's line of sight, and uses AI to analyze them. If the AI concludes that the driver is unaware of an approaching danger, it tightens the seat belt, among other measures, to warn the driver. The automaker plans to have the technology come standard with all commercial vehicles by the second half of the 2020s. 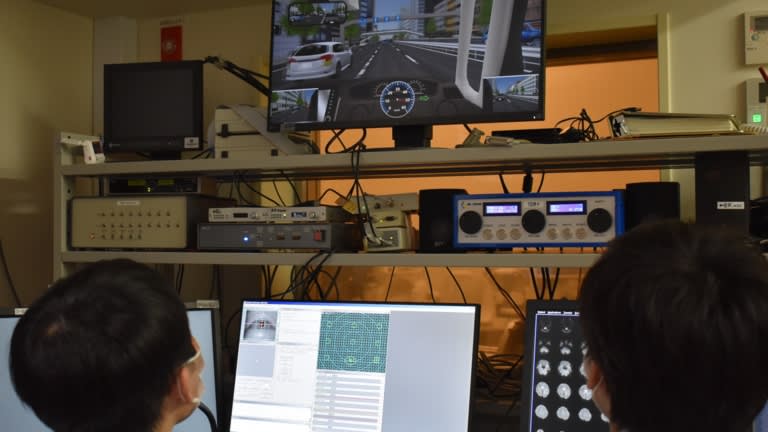 Honda has let AI learn the results of studies on brain science that it has conducted over the past several years. In one study, Honda researchers closely watched as MRI images displayed the brain activity of people operating a driving simulator.

Honda is exploring deep inside the brain to "nip an accident in the bud before it draws closer," said Hideaki Takaishi, a senior safety engineer at the company.

The development of cameras and other technologies to recognize external dangers, such as approaching cars and pedestrians, has been steadily progressing. But accidents still occur.

Honda has thus studied people's brain activities before accidents happen. Analyzing the activities with MRI, Honda researchers found that each person's brain works differently behind the wheel. Brain activity differs depending on various factors such as whether a danger is in a person's line of vision and whether they actually pay attention to it, according to the researchers.

In the above-mentioned case in Honda's demonstration, the AI could recognize the risk because brain studies have enabled it to learn that people may fail to perceive a risk even if it is in their line of vision. After issuing the warning, the AI recognized that the driver was now paying attention to the bicycle and loosened the seat belt based on its judgment that the risk had passed.

Honda plans to have AI learn how to respond in accordance with the patterns of how people think while driving. Thoroughly analyzing people's driving habits, the company hopes to eliminate all fatal accidents involving its vehicles by 2050. An IMs all-wheel-drive concept car at the Nissan stand during the 2019 International Consumer Electronics Show Asia in Shanghai. Nissan shared its vision for the future of mobility at CES Asia 2019 by showing technologies that access brain waves and merge the real and virtual worlds to assist drivers.   © AP

The global market for "brain tech" -- combining brain science and technology -- is forecast to grow to 5 trillion yen ($43 billion) by 2024, up 20% from 2020, Mitsubishi Research Institute said. While health and medical care will account for more than 80% of the market, automobile and other nonmedical sectors will form a market of nearly 1 trillion yen.

Other carmakers are also promoting studies on brain science.

Nissan is developing a driver assist system that uses a headset and other devices to read drivers' brain waves before taking actions such as pressing the accelerator in order to control them in advance. If brain waves are found to differ between preparing to step on the accelerator or the brake, it is possible to avoid accidents from stepping on the wrong pedal and keep the vehicle under proper control, according to Nissan. Similarly, the distance between cars can be automatically increased if brain waves show that the driver is feeling stressed because of insufficient distance.

Toyota Motor operates the Riken BSI-Toyota Collaboration Center jointly with the Riken Brain Science Center to find out how people's brains work while driving. German automaker Mercedes-Benz is also pushing ahead with studies to use understanding of the brain's electric waves to improve driving.

Tesla and many other new electric vehicle companies have advanced software and are fiercely competing with large, well-established automakers in developing autonomous driving technologies.

But there remain various problems related to self-driving technologies. For example, U.S. federal vehicle safety regulators have launched an investigation into Tesla following a series of fatal accidents.

Major automakers are set to counter emerging vehicle manufacturers' challenges with their accumulated technologies on vehicle safety. Promoting studies on brain science as part of such efforts, they are striving to attract consumers by further improving their safety technologies.