SEOUL -- Next month will close one chapter and open another for LG Electronics as the South Korean company ends its money-losing smartphone business and starts an alliance in the fast-growing electric-vehicle supply chain.

LG will complete its exit from the phone business, which has spilled red ink for six consecutive years, by the end of July. During the same month, LG will spin off its EV drive system segment. Canada's Magna International, one of the world's leading auto parts suppliers, will buy a 49% stake in that unit to create a new joint venture.

LG Magna e-Powertrain, as the joint venture will be called, will be headquartered in Incheon. Preparations are underway to establish bases in the U.S. state of Michigan and in Nanjing, China, aiming to secure customers in two countries that are major markets for EVs.

Magna's customers include General Motors, BMW and Ford Motor. Through the partnership with Magna, "LG will have a greater potential to supply global automotive leaders," said Lee Dong-joo, an analyst at SK Securities. 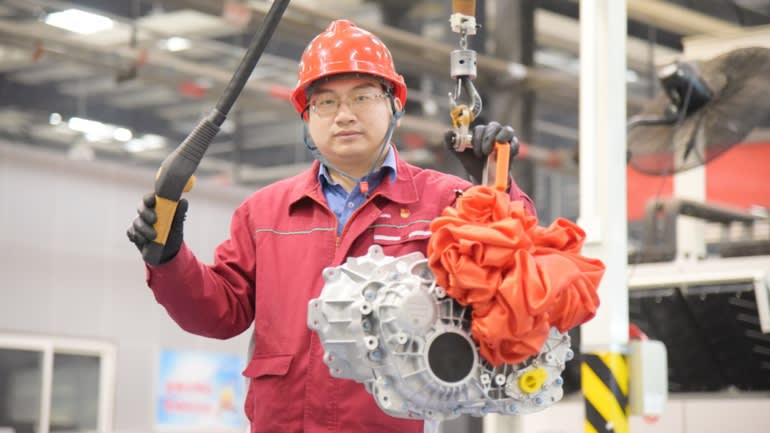 Appliances generated 41% of LG's revenue last year while TVs made up 24%. Vehicle components brought in 5.8 trillion won ($5.1 billion), just 11% of overall revenue. The business eked out an operating profit in 2015, the first year LG reported earnings at the division level. Each of the next five years ended up in losses.

But Magna likely weighed other factors in its choice of LG as a partner. The South Korean company has technological strength in core EV components, such as motors and batteries.

Long-lived appliances like refrigerators and air conditioners depend on motors, compressors and other components for their durability and energy efficiency. LG has long years of independent research and development of inverters, which modulate the rotation speeds of motors. The company is able to apply that technology to EV parts.

LG can also draw on the strength of other members of the LG group, which includes LG Chem -- the world's second-biggest producer of EV batteries -- and panel maker LG Display and LG Innotek, which supplies onboard cameras for autos.

The Magna tie-up is not LG's first initiative in auto parts. The company launched an internal team for automotive components in 2013 in anticipation of the growth of electric vehicles. In 2018, LG made Austrian headlight supplier ZKW into a subsidiary. LG has taken a three-pronged strategy for its automotive business, consisting of headlights, drive components and infotainment, which includes car navigation and audio.

Magna has big ambitions of its own. CEO Swamy Kotagiri has said the company is ready and willing to manufacture the Apple Car. Magna joined Apple's Project Titan to develop an EV.

LG forecasts the vehicle components division to turn a profit for the first time in six years in 2021. The company aims to expand sales at an annual pace of 15%. The growth would turn vehicle components into one of LG's largest segments, with more than 10 trillion won in annual sales in 2024, according to disclosed plans.

"We will develop auto parts into a growth engine and transform ourselves into a key supplier," said LG Electronics CEO Kwon Bong-Seok.