NEW DELHI -- Major Indian automakers touted their commitment to electric vehicles as Auto Expo 2020 opened to the public on Feb. 7, though each embraced a different strategy toward preparing for stronger emissions standards that take effect nationwide in April.

Mahindra & Mahindra focused on affordability in India, unveiling an electric sport utility vehicle priced at just 825,000 rupees ($11,600) for buyers who use government subsidies.

"I'm delighted to announce, ladies and gentlemen, that this will be India's most affordable passenger electric vehicle," Pawan Goenka, Mahindra managing director, said of the new eKUV100 crossover. Consumers will have "no excuse not to own [an] electric vehicle anymore."

The smiling executive drew applause from industry officials at the show near New Delhi. This year's expo in India, one of the world's largest automobile markets, comes as the government fights air pollution with the upcoming emissions standards, which will be as strong as those in Europe.

Mahindra achieved the low price for the new crossover through strict use of locally supplied parts, Goenka said, noting that in-house production of the drivetrain and other key components slashed costs. Electric vehicles in China typically sell for 100,000 to 200,000 yuan ($14,300 to $28,600), even with government subsidies.

The eKUV100, which hits the market in fiscal 2020, will run about 150 km on a charge. The battery can reach 80% full on a roughly hourlong recharging. The vehicle is expected to draw demand among urbanites and ride-hailing businesses.

Mahindra made an early bet on electric vehicles as a key growth field, acquiring an EV startup in 2010. The company has devoted 17 billion rupees, nearly $240 million, to related research and infrastructure. 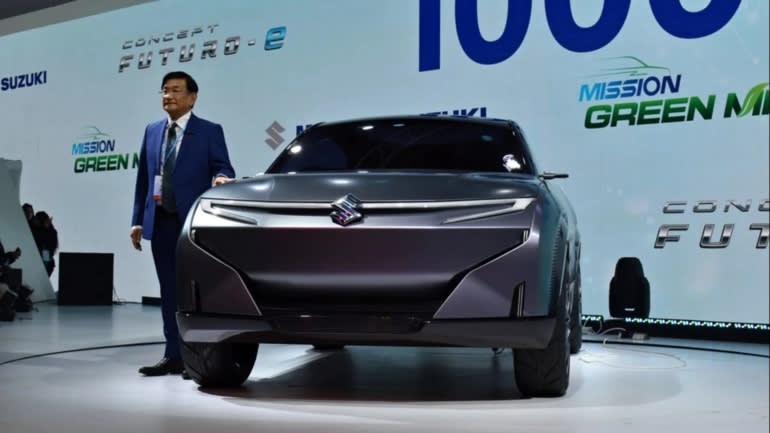 Tata Motors, stung after emphasizing affordability when it introduced the ultracheap Nano minicar more than a decade ago, has chosen to offer its electric Nexon SUV at a starting price of about 1.4 million rupees. Tata exhibited the crossover at the Auto Show, having debuted the vehicle at the end of January.

Tata launched the Nano with great fanfare in 2009, billing it as the world's cheapest car at 100,000 rupees. But India's growing middle class shunned the bare-bones auto. Tata has not officially ended Nano production, but it did not build or sell any of the vehicles in the April-December period.

The Indian automaker now bets on the green segment, and it regards the creation of "responsible and sustainable solutions" as a "national priority," said Natarajan Chandrasekaran, chairman of Tata Motors and the Tata Sons group holding company.

The company competes with Mahindra in EV lineups, having released electric versions of two models including the Tigor sedan. Tata Motors will roll out electric editions of at least four more models within two years, the chairman said.

Other players are hopping on the electric vehicle bandwagon in India.

"We're now at a time when we have to tackle environmental issues squarely," said Kenichi Ayukawa, president of Maruti Suzuki India, the automaker that controls about half of the country's passenger car market.

The company showed off an electric vehicle concept at the Auto Show. Maruti Suzuki India looks to expand its offerings to cover EVs, hybrids and vehicles powered by natural gas, selling a combined 1 million environmentally friendly cars over the next two to three years.

But as automakers race to develop cleaner cars, India's auto market remains soft. New-car sales dipped 13% to about 3.81 million units in 2019, dropping India to fifth place in global rankings behind Germany. Lenders are hesitant to extend money, and consumers are keeping their wallets shut.

"Improvement is expected this year, but a swift recovery is unlikely," Ayukawa said.

Infrastructure is essential to encourage consumer adoption of electric vehicles. Some cities such as Mumbai host charging stations, but this is "nowhere near the level that can accommodate a large number of EV motorists," Ayukawa said.