KUALA LUMPUR -- Malaysia unveiled on Friday a much-delayed automotive policy, hoping to stay ahead of Thailand and Indonesia by shifting the focus from energy-efficient cars to next-generation vehicles production for the region.

With total vehicle sales of about 600,000 units annually, such ambitious undertakings need to overcome the lack of economies of scale and proprietary technologies required to attract investors.

"The government has made a conscious decision under NAP 2020 to implement the new Malaysian vehicle project, building on our efforts in developing two national cars and one national motorcycle," Prime Minister Mahathir Mohamad said during the launch.

Proton, the first national car maker, was once majority owned by the government through state-controlled entities. In contrast, the new national automaker, which is at the stage of producing a prototype vehicle, will be privately held by Malaysians.

"The government is not going to invest," explained Mahathir. "We are asking the private sector to come in to produce cars not only meant for Malaysia but also for other countries."

The new policy outlined measures to drive production of new automobiles with internet-enabled connectivity and artificial intelligence, promoting next generation vehicles in 2025 in a segment that countries like China and the U.S. are leading. China, for example, has emerged as a leader despite having a shallow history in car making, thanks to the massive investments in autonomous driving technology by its internet giants Baidu, Alibaba Group Holding and Tencent. This is further complimented by a vibrant tech industry with numerous startups. 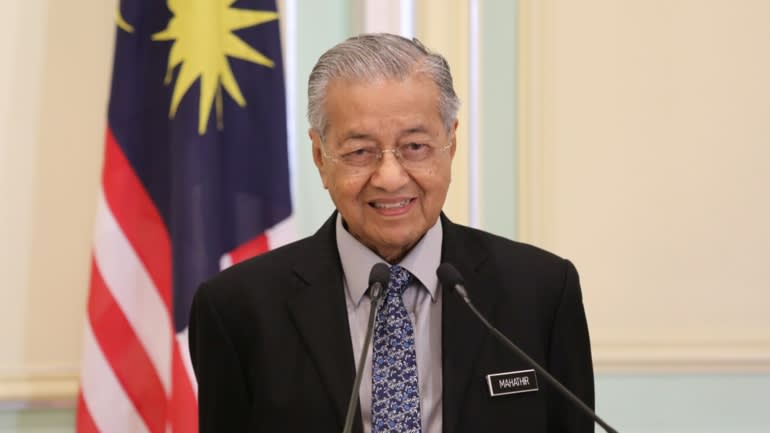 Malaysia's Prime Minister Mahathir Mohamad explained "We are asking the private sector to come in to produce cars not only meant for Malaysia but also other countries."   © Reuters

Such an ecosystem is almost nonexistent in Malaysia.

A little-known local company, DreamEdge, is driving the third national car project with its technology partner Daihatsu Motor, but Mahathir said other foreign makers would be welcome if they have "unique technologies."

DreamEdge, an engineering services provider, is likely to produce a compact car under the B-segment, aiming to roll out the first car in 2022 with sales target of 3,000 units monthly, according  Affin Hwang Investment Bank in research note last month.

The 2020 policy was long overdue after the previous one, which aimed to make Malaysia the hub of energy-efficient vehicle production, lapsed in 2018. The delay was partly caused by the change of government that year but in time for Mahathir to moot the idea of a third national car maker after clinching the nation's leadership for a second time.

Under the 2014 policy, policymakers had hoped the country could sell 1 million vehicles by 2020, a seemingly impossible target given that sales projections by the industry is at 607,000 units this year. The same policy and policies before that in 2006 and 2009 also failed to revive Proton's position as the No. 1 car producer. The first national car maker sold 49.9% of its stake to China's Zhejiang Geely Holdings in 2017 in a bailout in return for technological assistance.

The government said it achieved a penetration rate of 62% for energy-efficient vehicles in 2018, referring to cars that include good fuel economy, hybrid and alternatively fueled vehicles, but not enough to promote the wider development of electric cars.

In Thailand, the biggest auto market in Southeast Asia, the government pushed for the development of eco-cars, necessitating automakers to produce at least 100,000 units annually in return for incentives. Indonesia, too, is moving into developing electric vehicles and battery production to promote exports.

But such proactive measures are absent in Malaysia's auto policy, Titikorn said.

"We keep missing the train," said Chips Yap, managing editor of Piston.my, an automotive publication. He said the Malaysian auto sector has been driven more by policies that could be dictated by political consideration for national brands rather than by market forces.

Still, Malaysian automakers said they will support the government's drive to upgrade the industry. Perodua said on Friday it will improve existing autonomous technology adopted in production to provide customers with greater mobility.