TOKYO -- Maruti Suzuki, India's top carmaker, is leading the recovery of new car sales in the South Asian country which now has the world's second-highest number of coronavirus cases.

The unit of Japanese group Suzuki Motor announced on Sept. 1 that its passenger vehicle sales had jumped 21% on the year to 113,033 units. Among other categories, sales of mini cars with engine capacity of less than 1,000cc and an overall length of no more than 3.6 meters, such as the Alto and S-Presso models, nearly doubled compared with last year.

Industry-wide sales data for August has not yet been published, but there are signs that car demand is picking up in the world's fifth-largest car market, according to 2019 data, as the country reopens its economy in stages.

"Our expectations from August were quite low but surprisingly we saw some sales," a sales representative at a Maruti showroom in New Delhi told the Nikkei Asian Review. "We really hope the momentum picks up and increases with the festive season around the corner."

In India, Diwali, the Hindu Festival of Lights which falls in either October or November each year, is the busiest season for automakers. Signs of a pick-up in car sales before the Diwali festival is also good news for Maruti's Japanese parent, Suzuki Motor, which depends on its Indian unit to generate half of its global unit sales and about 30% of its global operating profit.

The sales representative thinks that new car demand -- which had hit rock bottom due to the new coronavirus in the first half of the year -- picked up partly because many people are beginning to go back to offices. "It is possible that many offices have resumed work and people don't feel safe traveling by taxi or metro yet," he said.

But Maruti's management remains cautious. Maruti president Kenichi Ayukawa, who was appointed as new president of the Society of Indian Automobile Manufacturers on Sept. 4, said during SIAM's annual meeting that day that it was too early to be optimisic about India's car sales. 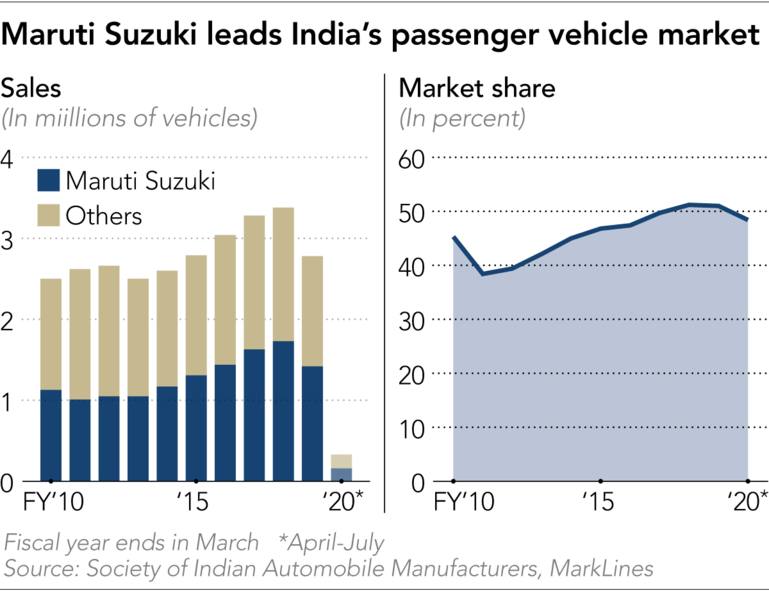 In India, about 336,500 passenger cars were sold in the four months through July, about a third of what they were a year ago, after factories and dealerships were forced to suspend operations for more than two months after New Delhi imposed a nationwide lockdown in late March to curb the spread of the virus.

Despite one of the world's biggest lockdowns, however, India on Monday overtook Brazil to become the country with the second-highest number of COVID-19 cases after the U.S. It is still unknown whether India's auto market will fully recover as the spread of the coronavirus continues.

With India's gross domestic product contracting 23.9% year-on-year in the April to June quarter, some observers expect that negative growth will continue until the first quarter of 2021.

"We are facing one of the toughest times in [our] history. The industry needs your [government] support," Ayukawa said during Friday's online SIAM meeting, which was also attended by government ministers and officials. Automakers are calling on the government to lower goods and services taxes that customers have to bear when they make purchases.

But Maruti is also facing another problem. Like in many other countries in the world, the two brands of Hyundai Motor Group -- Hyundai and Kia -- are rising rapidly in the sport-utility vehicles segment in India.

According to Japanese research company Fourin, the South Korean group occupied 35% of India's SUV market in the first six months of this year, surpassing Maruti's 22%.

Maruti dominated nearly half of India's passenger vehicle market share over the same period, easily surpassing Hyundai and Kia's combined share of 22.8%. But the rise of rivals in the fast-growing SUV segment is a concern for the future.

As India's top carmaker, Maruti will have to fend off both the effects of the coronavirus and competition from its South Korean rivals in the SUV market.

One challenge for Maruti will be to create unique products, even as it tries to meet the country's diverse needs. As Koji Uchida, principal at consultancy Arthur D. Little Japan, commented: "Maruti Suzuki's SUV designs tend to be conservative [so that they can appeal to all tastes]."