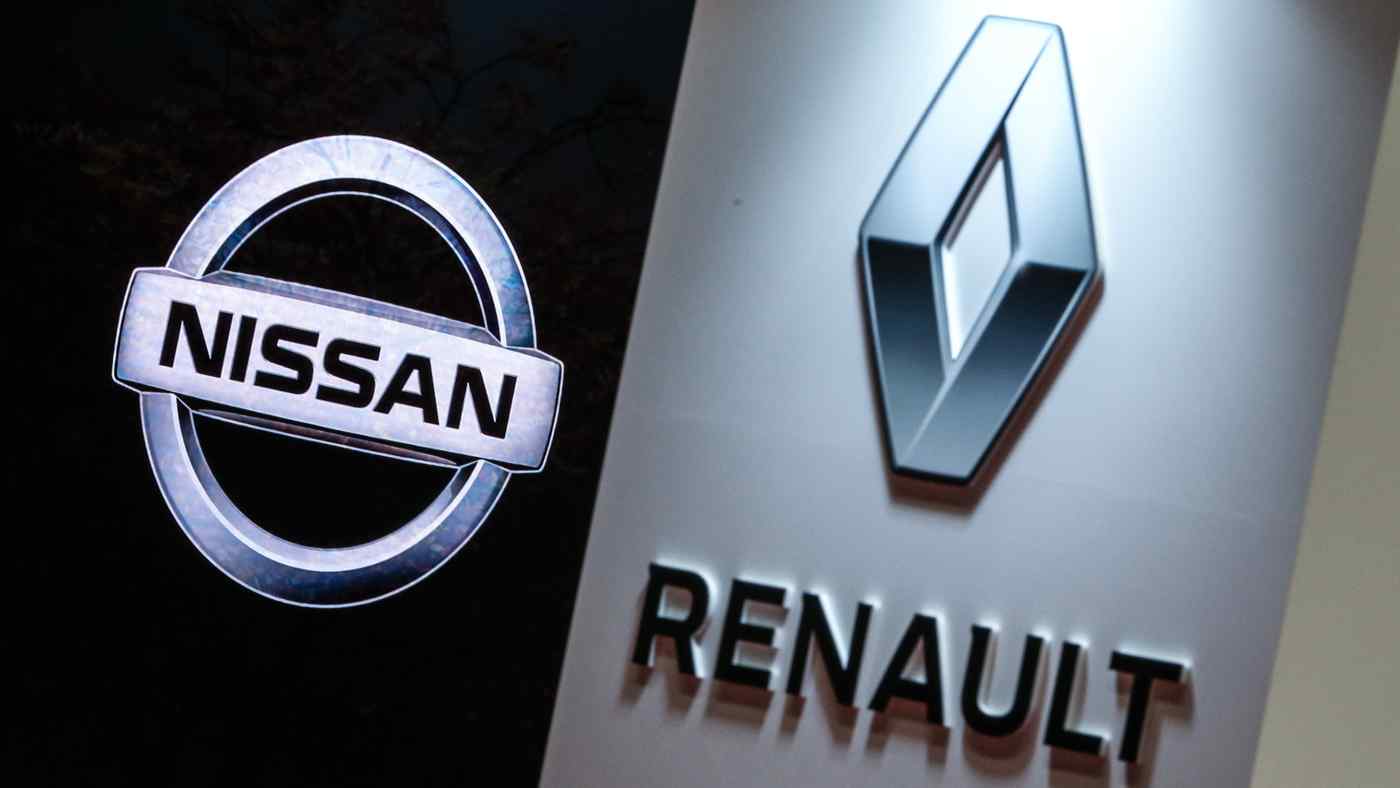 Nissan and Renault, which are in a three-way tie-up with Mitsubishi Motors, are shifting away from their previous focus on sales volumes. (Photo by Kai Fujii)
ERI SUGIURA, Nikkei staff writerMay 27, 2020 20:42 JST | Japan
CopyCopied

TOKYO -- Nissan Motor, Renault and Mitsubishi Motors set out on Wednesday their plans to deepen their carmaking alliance to confront plunging vehicle demand amid the coronavirus pandemic, saying they would become more efficient and cut costs while ruling out a full merger.

The three carmakers said their alliance would seek to cut investment costs per vehicle model by up to 40% through greater use of common platforms and parts. They also cast doubt over its previous growth strategy, saying the focus would shift away from maximizing sales volume.

"The alliance's new model focuses on efficiency and competitiveness, rather than on volume," said Jean-Dominique Senard, chairman of both the grouping's operating board and Renault, at a news conference on Wednesday. "We base our strategy on the assets that already exist within the alliance."

Each of the three companies will preside over development and production of particular models, with support from the others. This "leader-follower" model will be applied to nearly half of their vehicle output by 2025.

The alliance has also set "reference regions," where one company will take the lead for particular parts of the world, allowing the other partners to use its production capability.

Nissan will take the lead in China, North America and Japan; Renault in Europe, Russia, South America and North Africa; and Mitsubishi in Southeast Asia and Oceania.

The carmakers said they will take a similar approach with technology. Nissan will take the lead in autonomous driving, making associated technologies available to the other alliance members.

"There is absolutely no doubt about how it will work in the future. No backward steps for absolutely sure. If there had been some doubts in the markets these days, this is over today," Senard said, adding that becoming more efficient does not require a merger.

Nissan CEO Makoto Uchida echoed Senard. "The alliance is an asset to drive the competitiveness of each company," he said. "For Nissan, we will concentrate on our strengths and get full support and leverage from the alliance."

Some analysts are skeptical about the new framework of the alliance, claiming the 21-year-old tie-up has hindered bold reforms and hampered the automakers' performance. Mitsubishi joined the alliance in 2016.

Nissan and its largest shareholder Renault have been at odds over their capital structure, especially after Carlos Ghosn, Nissan's former chairman, was arrested by Japanese authorities in November 2018. Renault holds a 43.4% stake in Nissan, while the Japanese company has 15% in its French partner, but no voting rights.

While the alliance shares procurement, the three companies have only had limited involvement in each other's production, making it difficult for them to take full advantage of economies of scale.

The alliance, which was previously dominated by Ghosn -- who chaired all three carmakers and was head of the alliance board -- created a new consensus-based board in March 2019 to share the benefits of collaboration more evenly.

But management shake-ups at Nissan and Renault have hampered efforts at further reforms to the alliance.

Nissan, which on Thursday will unveil its midterm plan for the next three years, recorded a net loss for the year ended in March as it struggled from the aftermath of Ghosn's growth-heavy strategy, which was plagued by low profitability. Renault also reported a net loss for 2019.

Hit by the pandemic, the three automakers posted significant drops in sales in March. Global vehicle sales for Nissan were 43% lower than in March 2019 and down 47% for Renault and Mitsubishi.

"Nissan's performance is poor, even after more than 20 years of alliance with Renault. There is no choice but to say the alliance has been a failure," said Seiji Sugiura, senior analyst at the Tokai Tokyo Research Institute. "While they removed the logic for the growth strategy, they had already been exploring efficiency. Whether they can implement this new framework is a big question."

Sugiura said the automakers have not made sufficient efforts to cut costs, leaning too heavily on the alliance to deliver elusive benefits. Renault produces Nissan's Micra small hatchback at a plant in France, but Sugiura said this was done only to help the French carmaker keep its factory in operation.

"It is better to integrate Nissan and Renault as one company for them to implement efficient restructurings," he added.