The new Z on display along with previous editions of the car: With a pedigree of more than 50 years, the Z has been one of Nissan's most important models. (Photo courtesy of Nissan)
ERI SUGIURA, Nikkei staff writerSeptember 16, 2020 13:39 JST | Japan
CopyCopied

TOKYO -- Nissan Motor on Wednesday unveiled a prototype of its latest Z sports car, which it hopes will help restore its luster as the Japanese carmaker tries to bounce back from big losses in recent years.

"Z represents Nissan's spirit itself, and is a very important model for Nissan Next," said CEO Makoto Uchida, referring to the company's midterm business plan through March 2024. "We will do everything from A to Z," vowed Uchida, clad in a T-shirt and sport coat for the online event.

Uchida, who remarked that his first car was a Z that he bought in the 1990s, also touted Nissan's latest electric vehicle, the Ariya, which he said offers a new behind-the-wheel experience with its driver-assistance technology. The updated Z car maintains the company's pure sports car tradition, "as the Z is Nissan's DNA," Uchida said.

The event was later joined by hundreds of fans of the model, who gathered at the Z Car Convention in Nashville, close to where the company's U.S. headquarters is located.

Nissan's latest version of the car, which will be the seventh-generation, is the successor to the 370Z, which has been on sale for more than a decade with only minor tweaks. The launch date for the new model was not revealed at the event.

The sports car has echoes of the model's half century of history. The badge looks like the one worn by the 1970s Nissan Fairlady Z. That first-generation sports car, known as the Datsun 240Z in the U.S. and other markets, established the iconic brand. The latest iteration returns the Z to its roots, with a nose inspired by the 240Z and taillights reminiscent of the fourth-generation 300ZX.

Nissan hopes to do more than win over longtime fans with the latest model. Modern enhancements, such as a touch screen infotainment system and a restyled interior, are aimed at pulling in younger drivers. 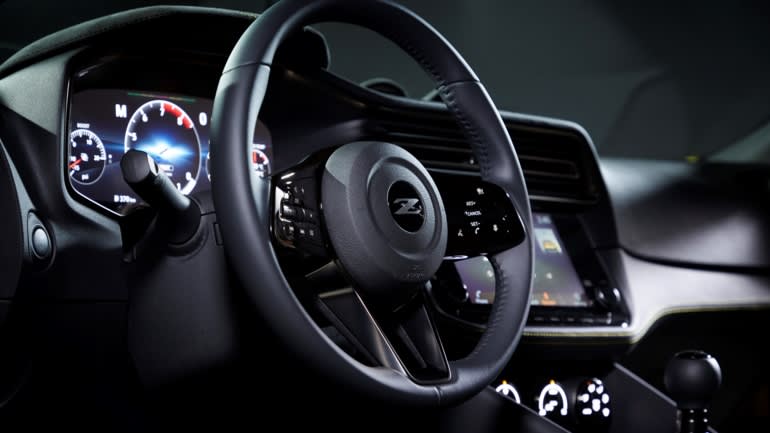 A modern interior and touch screen infotainment system are among the improvements Nissan hopes will bring new customers to its newest version of the Z car. (Photo courtesy on Nissan)

Nissan has rolled out new models in quick succession over the last few months. The carmaker not only launched a new Kicks sport utility vehicle in Japan in June, its first new model in two and a half years, the following month it introduced the Ariya, which Nissan plans to put on sale in mid-2021. In the U.S., the company unveiled in June a fully remodeled Rogue SUV that will hit showrooms later this year.

Uchida announced a plan in May to launch 12 new models over the next 18 months, including the newest Z, in hopes of exciting buyers and dealers. With Nissan forecasting net losses of over $6 billion for the second year in a row for the year through March 2021, improving sales and restoring the carmaker's brand value are immediate challenges for Uchida, who took over as CEO in December. The original Z car, left, marketed in the U.S. as the 240Z, was especially popular in North America. It raised the profile of the Datsun brand that Nissan used there at the time. (Photo courtesy of Nissan)

The battered carmaker is trying to shift from the approach taken by former Chairman Carlos Ghosn, who emphasized expanding Nissan's global market share by increasing production and offering massive incentives to dealers to allow discounts.

Under Uchida's leadership, the company announced in May the closure of plants in Indonesia and Spain, although the Spanish shutdown will be delayed to the end of 2021 due to protests from employees. Its annual production capacity will be slashed 20% to 5.4 million vehicles worldwide through March 2024.

Some analysts predict a hard road ahead for Nissan, which is aggressively pushing new products to restore its brand. "We should assume it will take some time before we see a full-scale improvement in earnings," said Toshihide Kinoshita, a senior analyst at SMBC Nikko Securities, in a report published Tuesday.

"There is a strong sense of uncertainty as to whether Nissan will be able to proceed with the plan to raise sales prices and reduce incentives, in line with the launch of new models," he added.