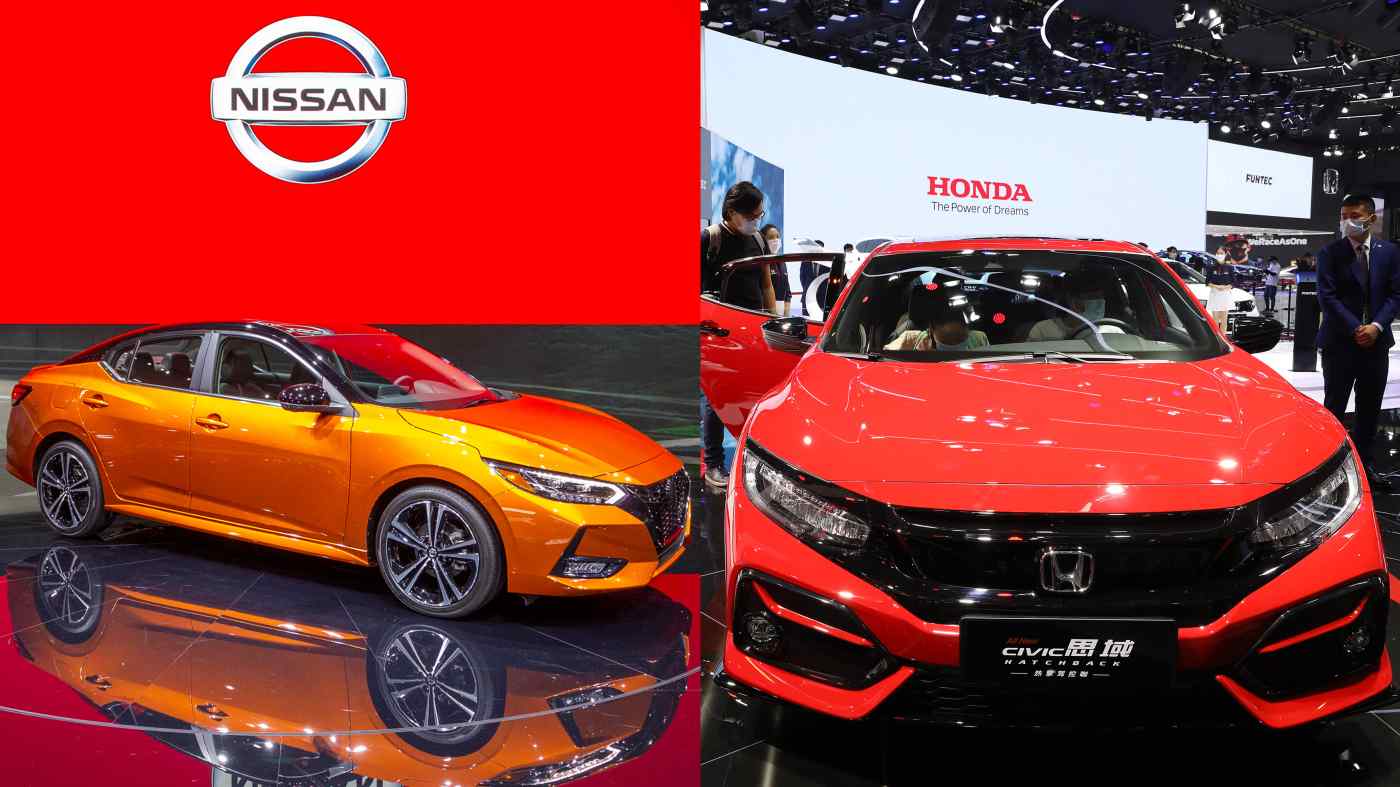 Nissan and Honda expect the semiconductor shortages to be resolved by around the middle of this year. (Source photos by Getty Images)
ERI SUGIURA, Nikkei staff writerFebruary 9, 2021 17:09 JSTUpdated on February 9, 2021 21:00 JST | Japan
CopyCopied

TOKYO -- Nissan Motor and Honda Motor on Tuesday both acknowledged heavy burdens to their businesses triggered by semiconductor shortages, with both Japanese car companies cutting their estimates for vehicle sales this fiscal year.

The carmakers have revised upwards their full-year bottom line forecasts through March, the second time since November, as they push cost-cutting efforts to navigate the effects on the industry of COVID-19.

However, they believe the situation will remain tough through the first half of 2021 as a result of the continuing chip crunch, triggered by high demand for semiconductors and limited production capacity.

"The automotive industry is facing global chip shortages, and it is becoming challenging to produce the amount which meets demand," Makoto Uchida, chief executive of Nissan, told an online earnings conference on Tuesday.

Although Uchida declined to specify the exact impact of the chip crunch on production, Nissan forecasts it will sell 4.01 million units this fiscal year, down 3.6% from what was expected in November. Revenue is expected to reach 7.7 trillion yen, down from 7.94 trillion yen forecast last time.

Honda echoed the concern. "If there was no shortage of semiconductors, operating profit this fiscal year would be higher than last year, absorbing the COVID-19 impacts. It is regrettable," Seiji Kuraishi, executive vice president, said during a virtual conference.

Still, the company's operating profit is expected to be 520 billion yen, up 100 billion yen from November's forecast.

Honda now believes it will sell more motorcycles this fiscal year than predicted in November, particularly in India and Indonesia, but expects vehicle sales will fall by around 100,000 units from the last forecast because of the chip crunch to reach 4.5 million vehicles.

Sales revenues will be 12.9 trillion yen for this fiscal year, the company predicts, down 100 billion yen from November's forecast, or down 13.3% from fiscal 2019.

Kuraishi added that the decline of 100,000 vehicle units was mainly expected to occur in the January to March 2021 quarter, affecting some of Honda's top-selling products. The situation is getting better, he reiterated, adding that the shortages would be resolved by the first half of this year, with "zero impact" on the fiscal year starting in April. Nissan chief operating officer Ashwani Gupta said the company detected the problem in November and December. "Since then we have been working very closely with suppliers to get out of this situation," he said.

"The cycle is normally six to seven months after you decide on the capacity increase, and we think that by May or June the whole world should be out of this crisis," he predicted, adding that strong demand for automotive and nonautomotive chips was creating the shortages.

The sales hit from chip shortages is weighing even more heavily as the automakers are hastening to rebound from the depressed vehicle sales market caused by the pandemic -- and Nissan's own restructuring.

Indeed, they have been putting efforts into cost-cutting measures, prompting them to forecast better-than-expected results.

Honda, which is carrying out various cost-reduction measures including in its research and development operations, had previously revised its net profit forecast upward in November to 390 billion yen.

It announced a net profit of 444 billion yen for the first nine months of the fiscal year, down 8.5% from a year before.

Nissan's earnings forecast was previously revised upward slightly in November, from an expected loss of 670 billion yen, to a loss of 615 billion yen reflecting a recovery from the initial impact of COVID-19.

Uchida said the company's efforts to cut reliance on discounts in America, as well as cuts to advertising and the fixed cost base, should offset the decline in operating profit triggered by reduced unit sales this fiscal year.

Nissan has been growing more optimistic on its ability to cut costs. Uchida revealed that the company expected to trim fixed costs by 330 billion yen for fiscal 2019 and 2020 combined compared to 2018, instead of the 300 billion yen it announced in May.

As a result, the company achieved an operating profit of 27 billion yen for the October-December quarter.

"Nissan Next is progressing smoothly even amid the headwinds [of COVID-19 and chip shortages]," Uchida said, referring to the restructuring plan. New car models this fiscal year were leading the sales recovery, he added.

Nissan suffered from sluggish car demand triggered by the pandemic for a longer period than its peers such as Toyota Motor and Honda. Nissan only managed to exceed its monthly global production, compared to the same period a year earlier, in December, while the other two Japanese carmakers did so from September, fueled by economic rebounds in China and the U.S.

Nissan in May launched a restructuring plan that aims to achieve operating margin of 5% through the end of fiscal 2023 by slashing surplus annual production capacity and rationalizing its business.

The car company is shifting from the approach taken by former Chairman Carlos Ghosn, who prioritized Nissan's global market share by increasing production and offering incentives to dealers to allow discounts.