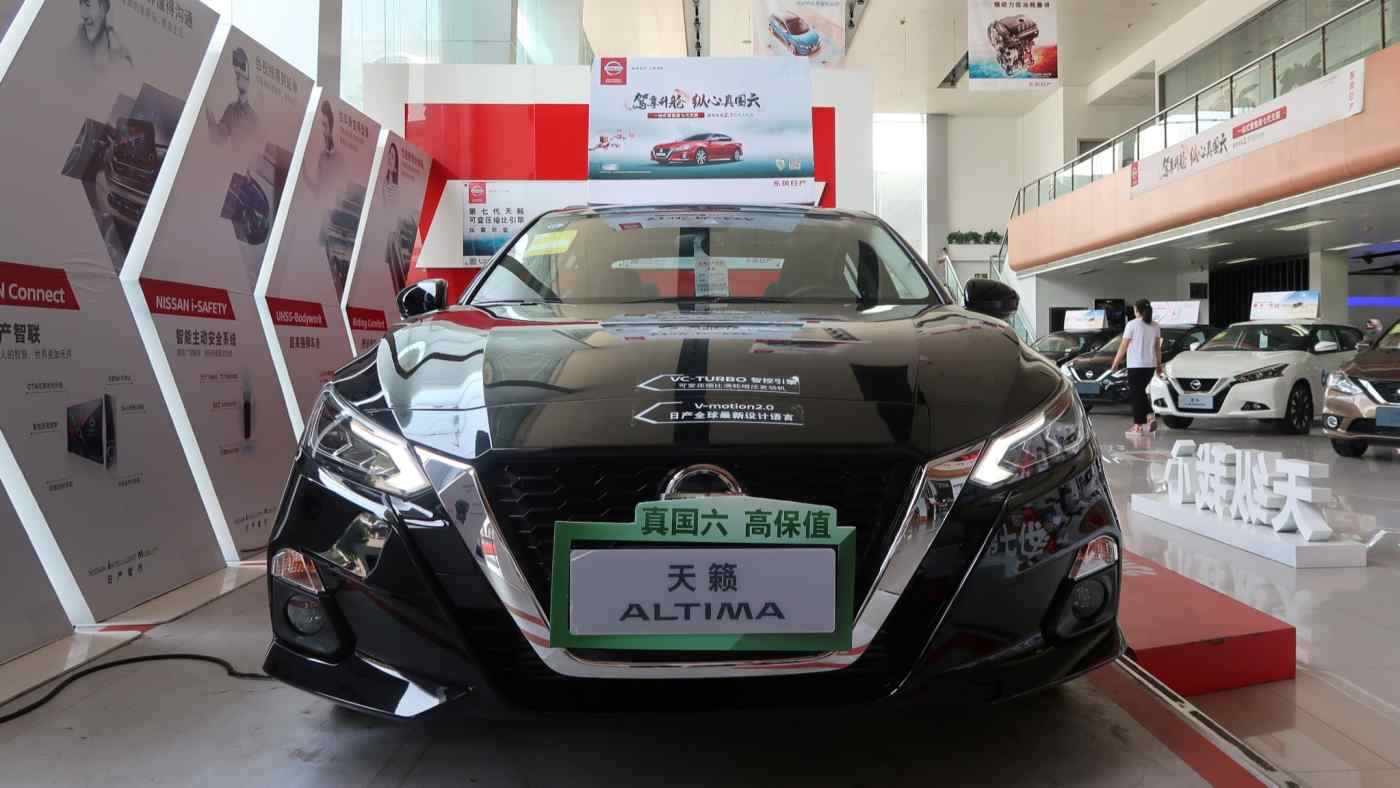 A Nissan Altima at a dealership in Beijing: The Japanese automaker has little choice but to rely on China's growing market.   © Reuters
HIROYUKI KOIZUMI, Nikkei staff writerNovember 11, 2020 07:22 JST | Japan
CopyCopied

TOKYO -- Nissan Motor plans to raise production capacity in China by around 30% and send in vehicle development teams from Japan, keeping focused on a growth market even as the automaker retreats from the pursuit of scale under former boss Carlos Ghosn.

The Japanese automaker wants all of the new cars it releases in China to be electrics, in line with Beijing's support for low-emission vehicles.

As its latest quarterly results are likely to show Friday, Nissan has little choice but to double down on China at a time of flagging growth in the American and Japanese markets.

"China is the most critical market. We've got to do our best there, or it will be the end of Nissan," CEO Makoto Uchida said at a board meeting in mid-October.

At this meeting, Uchida and fellow executives discussed steps for China, including a plan to install Nissan's e-Power hybrid drive system on all new models sold in the world's biggest auto market, except for electric vehicles. With Beijing planning to phase out sales of conventional gas-burning vehicles by 2035, electric vehicles and hybrids are key to Nissan's growth strategy there.

Nissan's ongoing capacity increase in China was reported at the board meeting as well. A new production base will open by year-end in the city of Changzhou, near Shanghai, followed by another in 2021 in Wuhan. These factories will boost Chinese capacity by 30% to around 2 million autos, including the new Ariya electric vehicle.

Nissan is the only one of Japan's three leading automakers that sells more vehicles in China than in the U.S. Last fiscal year, 1.4 million Nissans were sold in China, topping American sales of 1.23 million.

The U.S. and Japan have been weak spots for Nissan. The automaker's U.S. sales tumbled 32% on the year in the July-September quarter amid the COVID-19 pandemic, compared with declines of 11% for Toyota Motor and 9% for Honda Motor.

Japanese sales jumped 40% for Toyota and 38% for Honda in October as demand rebounded from the country's consumption tax hike a year earlier. Yet Nissan's domestic sales rose a milder 17%.

Nissan thus has little choice but to rely even more on China. While Nissan braces for a group operating loss of 470 billion yen ($4.5 billion) in the year through March, the company aims to lift its operating margin to 2% next fiscal year.

Growth in its Chinese business, which generates upward of 100 billion yen in profit annually, will be key to achieving this goal. Nissan's new-car sales in the country have topped year-earlier levels every month since April, except for August. Growth came to 5% in October.

While Toyota and others have teamed with multiple automakers in China, Nissan has offered its full lineup through a single partner, Dongfeng Motor, since entering the market in 2003.

This strategy gave Nissan the biggest Chinese market share among Japanese automakers at one point, and it was touted as an achievement of the Ghosn era. But in recent years, the company has rolled out fewer new models and fallen behind Toyota and Honda in terms of market share. Ghosn's hard-driving pursuit of scale came to an end after his 2018 arrest in Japan on allegations of financial misconduct.

With Nissan's medium-term plan calling for a 20% cut in global capacity through fiscal 2023, the company's investment increase in China seems to run in the opposite direction. If this bet on the world's biggest auto market fails to pay out, Nissan's drive to exit chronic losses may hit a dead end.