Nissan expects another net loss of over $6bn in FY2020 Net loss for this fiscal year will be impacted by the weakened performance of its affiliates, including Mitsubishi Motors, and additional costs related to restructuring and impairments, which accounted for most of the net loss last year. The battered automaker expects a further drop in its main business with fewer car sales.

"The forecast for fiscal 2020 has become very severe, as an outcome of a challenging business environment and our restructuring," said CEO Makoto Uchida. "But I believe we are certainly able to achieve a 5% operating profit margin and 6% of market share, our milestones, by fiscal 2023."

Nissan expects to sell 4.12 million cars globally this year, down 16.3% from 2019, in line with the company's forecast of a global demand plunge of 16% and on par with sales posted in fiscal 2010, when it was still suffering from the aftermath of the global financial crisis. Nissan continues to witness declining car sales from its peak of 5.77 million in 2017. 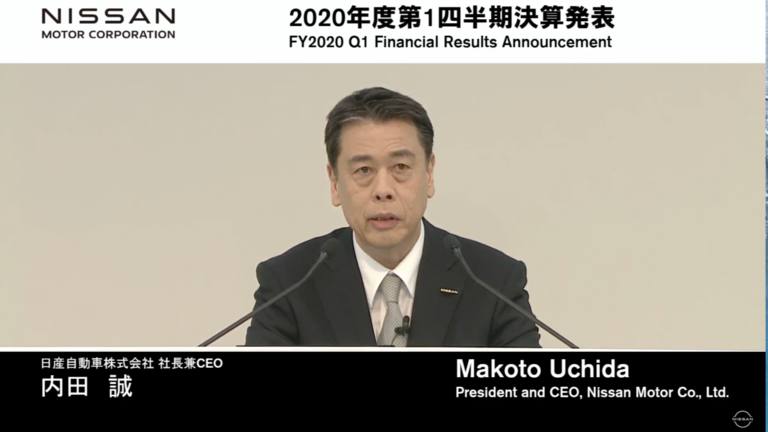 Nissan CEO Makoto Uchida said the forecast for fiscal 2020 is dire, during an online media briefing on Tuesday. (Screenshot from Nissan Website)

But the company is seeing early signs of a recovery. The Kicks crossover utility vehicle debuted last month in Japan as the company's first new model in two and a half years, excluding ultrasmall kei cars. Nissan also unveiled in June its Rogue crossover in the U.S. COO Ashwani Gupta said on Tuesday that the company sold 11% of its cars online during the April to June period, partially covering for a significant drop in customer traffic in major markets.

Nissan will omit dividend as it did at the end of fiscal 2019, and its shares were down 4.3% on Tuesday. The automaker also announced that it posted a net loss of 285 billion yen for the April to June period.

Nissan had previously said that global auto demand will fall 15% to 20% this year as a result of the pandemic, while not disclosing its forecast for 2020.

Mitsubishi Motors, Nissan's Franco-Japanese alliance partner with Renault and in which Nissan has 34% stake, announced on Monday an estimated net loss of 360 billion yen this year.

Under the midterm plan announced in May, Nissan will focus on its core markets -- North America, China and Japan -- along with new technologies and models through 2023, while slashing global annual capacity by 20% to 5.4 million vehicles.

It will also launch 12 new models in the coming 18 months to lure customers back, including its new Ariya, an all-electric crossover SUV on which the maker is counting to burnish its brand. It also said it would renew car life cycles at least every four years, instead of the current five.