Coronavirus shutdown to have further impact on earnings TOKYO -- Nissan Motor's net profit will fall to 65 billion yen ($592 million) for the year ending in March, down 80% on the year to its lowest level since 2009, the automaker forecast Thursday.

This is the Japanese automaker's second downgrade for fiscal 2019. The earnings forecast now stands 62% lower than the initial projection of 170 billion yen in May.

Sluggish car sales in China and the U.S. were blamed for the weakness.

"Unfortunately, the slowdown in our car sales is worse than expected," CEO Makoto Uchida told reporters in Yokohama. "The situation we are facing is very critical."

The company reported a net loss of 26 billion yen for the October-December quarter, its first loss for the three-month period since in 2008. Nissan lowered its outlook for global car sales for the year to 5.05 million vehicles from 5.24 million. The automaker had initially expected to sell 5.54 million autos in the year.

Thursday's announcement does not take into account the halt in operations at some factories in China owing to the coronavirus outbreak. Nissan plans to resume production in mid-February, but the suspension will have "a certain impact," Uchida said.

Nissan also will reduce production at some domestic plants, Uchida said, as the coronavirus has prevented the company from procuring some necessary parts.

The company cut its annual dividend to 10 yen per share, the lowest since 2011. The reduction will hit Renault, the French automaker that holds stake of more than 40% in Nissan.

"For now, I can't say how, but we need to consider ways to take this responsibility," Uchida said. 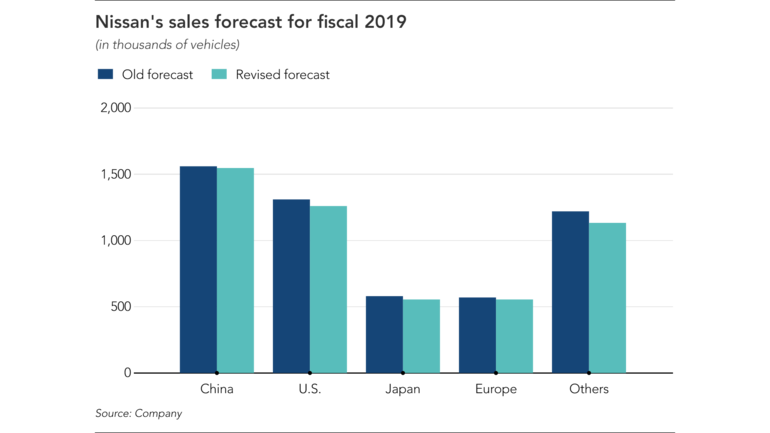 The automaker will revise its medium-term business plan in May, the CEO said. Uchida stressed that Nissan will proceed with cost cuts.

"We will make our strength clear and put our resources into it," he said. "There will be some regions where we will have to give up on expanding."