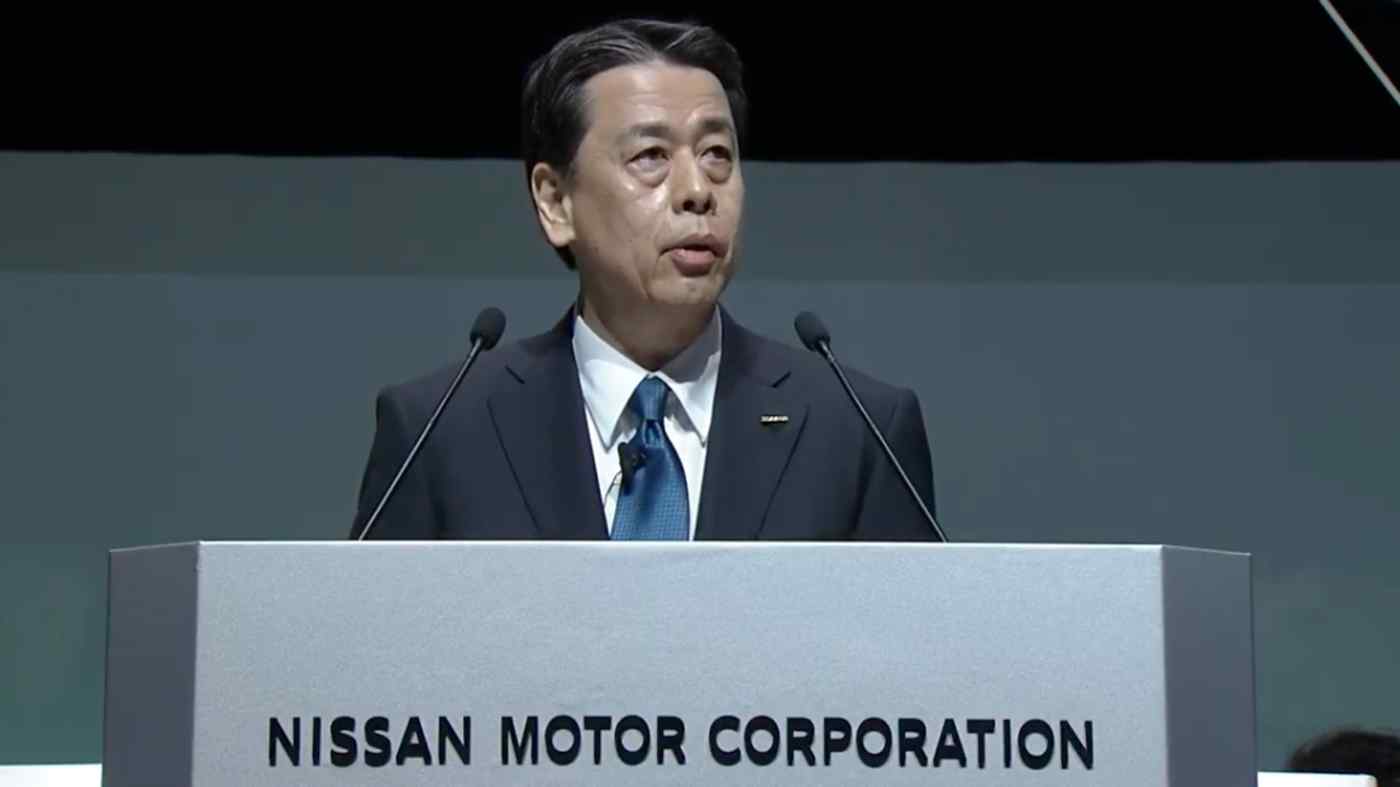 TOKYO -- Shareholders in Nissan Motor expressed growing irritation with management at the company's annual shareholders meeting Monday over a continued tumble in the auto maker's stock price and future strategy as laid out in its recently announced midterm plan criticized as lacking vision.

The once high-flying global automaker has hit a series of speed bumps beginning with the scandal surrounding the arrest of former chairman Carlos Ghosn. There have been subsequent management shake-ups and questions over internal governance as well as the company's relationship with top shareholder Renault. CEO Makoto Uchida was brought in from the automaker's China operation in December 2019 to restore order and lead a recovery, but the coronavirus pandemic has made that task even harder.

One investor attending the meeting took Uchida, who earlier this year urged investors to "fire him" if business did not show improvement, to task over the automaker's share price.

The shareholder bluntly asked, "Mr. Uchida, do you remember that you said at an extraordinary general meeting in February that you would take responsibility if the stock price goes below 500 yen ($5)?"

Uchida responded that he still stands by the remarks but stressed that the promised rebound is still on track. "We will announce a new electric vehicle, the Ariya, next month which will reveal Nissan's strength. The Nissan Next midterm plan will lead us to recovery in the first two years and put us in a growth phase."

The executive said that the crossover Ariya, set to be unveiled on July 15 in Japan, will take the lead for Nissan as its flagship vehicle due its being electric and having limited autonomous driving features.

While Uchida attempted to convince investors with its midterm plan announced on May 28, many remained skeptical of the battered carmaker returning to growth. The stock price has plunged more than 40% since the beginning of December when Uchida took the helm. 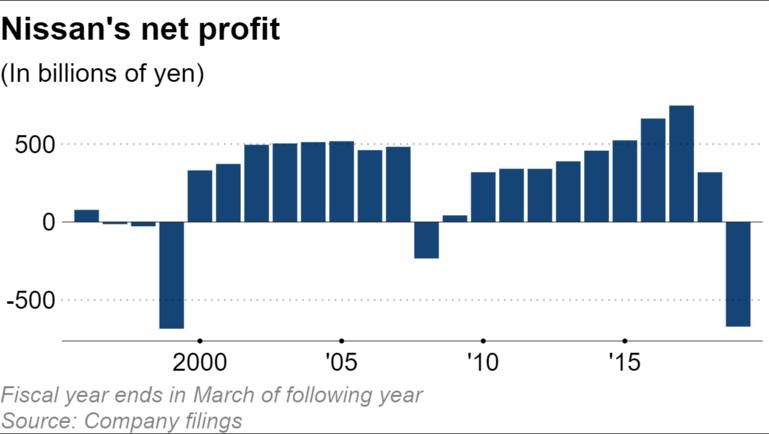 "Nissan has lured many individual and institutional investors with its relatively high dividend yield, rather than fans of its cars or company, unlike its peers," said Seiji Sugiura, a senior analyst at Tokai Tokyo Research Institute.

No doubt adding to shareholders' ire is that they will not receive a dividend for the fiscal year ended in March, during which Nissan posted a net loss of 671 billion yen ($6.2 billion) mainly due to costs associated with restructuring and impairments. But despite criticisms voiced at the meeting, the meeting ended after Nissan managed to gain approval for all 12 directors proposed by the company, including Uchida himself.

"Sales in the U.S. and China seem yet to have hit bottom, and the [stock] price is now in the 300-yen range," said an investor, also chiding Uchida over his February remarks.

Another shareholder asked Uchida to estimate profits or vehicle sales numbers for fhe current fiscal year, pointing out that rival Toyota Motor had said its operating income would decrease by 80% this year driven by the new coronavirus. At its May 28 news conference, Nissan declined to make a profit forecast.

"We outlined the [midterm] plan which can surely be implemented, as opposed to multiple downward [profit and sales] revisions in the past.," Uchida said. "The share price will increase as long as we can restore market confidence. We will aim for vehicle sales that are achievable."

While Uchida believes that global demand for autos will shrink by 15% to 20% in this fiscal year from the previous one, he vows that Nissan will weather the coronavirus storm through close communication with suppliers and partners. He says the company is seeing a recovery in relations with its U.S. dealers, who had complained of its excessive dependence on incentives in pursuit of greater market share. 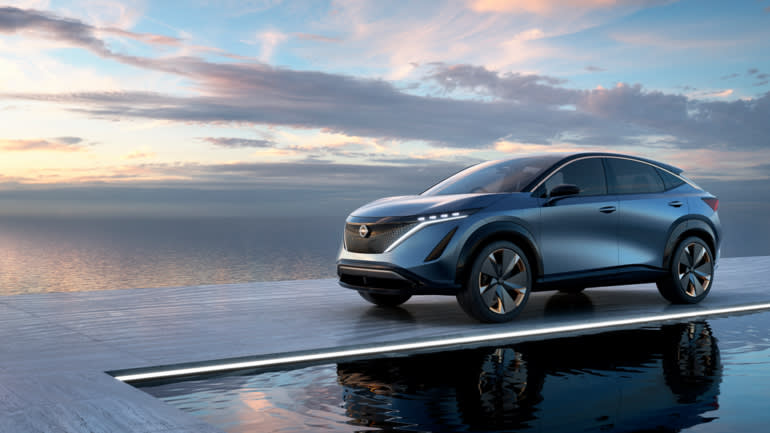 The new Nissan Ariya Concept car introduced at the Tokyo Motor Show in 2019. (Photo courtesy of the company)

The automaker is making a big push in electric vehicles, aiming to annually sell one million that are either purely electric or incorporate hybrid technology e-Power -- a fivefold increase from current levels. But one investor raised concerns over how that ambition as outlined in the midterm plan can differentiate Nissan from competitors. "Toyota and Honda Motor are also putting a lot of effort into electrification," he said.

Another investor complained that it would be difficult for Nissan to launch 12 models in the next 18 months as described in the plan, as Japanese dealers say there are no cars to sell. The carmaker has not launched any completely new models for the domestic market in the last decade -- but will start offering the Kicks crossover utility vehicle on Tuesday.

"Our path for growth is not plain, but we will certainly return Nissan to growth," Uchida said. "We have wonderful employees. We will unite to overcome this crisis together,." But the restating of such resolution was not enough to gain the support of investors, with some even denouncing what they see as a lack of wider perspective.

"We can't see a future vision in Nissan," said the one who brought up electrification. "I would like you to mention this in the next general meeting," he added, pointing out that Toyota is attempting to create a so-called smart city where it will test autonomous vehicles as well as smart technologies. Honda, on the other hand, is expanding its business to robotics and aircraft, he added.

Koichi Sugimoto, a senior analyst at Mitsubishi UFJ Morgan Stanley Securities, warns that the company needs to accelerate the pace of recovery. "There is no time left for Nissan to post sluggish performance when Toyota and other automobile makers are continuously releasing attractive products," Sugimoto said.