TOKYO -- Nissan Motor on Thursday forecast a net loss of 615 billion yen ($5.8 billion) for the fiscal year through March, a slight upward revision from previous guidance, helped by an improvement in sales and the implementation of cost-cutting measures, but analysts said it still faces a long road to profitability.

The outlook for the automaker contrasts starkly with those of rivals Toyota Motor and Honda Motor, which last week almost doubled their net profit forecasts for the full year from previous guidance.

"Six months have passed since we announced 'Nissan Next' to put the business on the growth track, and we are making steady progress," Nissan CEO Makoto Uchida said at an online earnings conference Thursday, referring to the automaker's restructuring plan through fiscal 2023.

"Our vehicle sales in the second half of the fiscal year are expected to recover to last year's levels, but the reduction in sales in the first six months was very big," he added.

The net loss for the July-September quarter was reduced significantly to 44 billion yen from 285 billion yen in the previous quarter. The company now expects to sell 4.16 million vehicles this year, up from 4.12 million previously expected.

Uchida said the upward revision of its earnings forecast stems not only from an improvement in the U.S. and Chinese markets, but also the company's efforts to lower incentives to cut dependence on discounts in America. Its inventory, including at its Chinese joint venture business, was down 26% from a year ago. Its fixed costs were down approximately 12% for the second quarter from a year earlier, boosted by expense reductions in marketing and sales and other areas. The company wants to cut a total of 300 billion yen of fixed costs from fiscal 2018, and Uchida said the plan was "working smoothly."

"We are launching new models in the coming [months]. These investments will be necessary to achieve black ink for fiscal 2021, as we plan," Uchida reiterated, adding that new models such as sport utility vehicles Kicks in Japan and Rogue in the U.S. launched earlier this year have been well received.

Uchida vowed in May to release 12 new models in the next 18 months, as models that are outdated compared with those of competitors have alienated Nissan dealers and customers worldwide.

The battered carmaker is shifting from the approach taken by former Chairman Carlos Ghosn, who emphasized expanding Nissan's global market share by increasing production and offering incentives to dealers to allow discounts.

Under the leadership of Uchida, who became CEO in December 2019, annual production capacity will be slashed 20% to 5.4 million vehicles worldwide through March 2024. Plants in Spain and Indonesia will be closed while the company rationalizes its business. 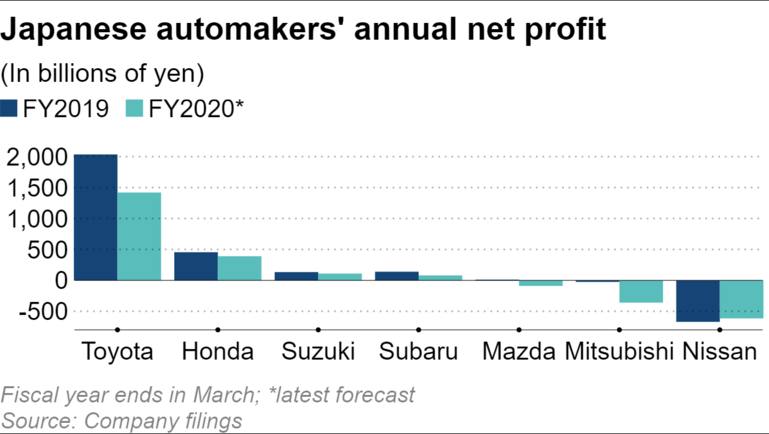 Still, Nissan is behind its Japanese peers in navigating the pandemic-hit industry.

Toyota expects a net profit of 1.42 trillion yen for this fiscal year through March, after posting 629 billion yen in net profit for the six months to September as its plants in North America resumed operation before those of its U.S. rivals, in response to rising consumer demand. Honda also expects 390 billion yen of net profit for the full year, as sales rose through the second quarter.

The picture is less rosy at the three-member Franco-Japanese alliance.

Renault, which has a 43.4% stake in Nissan, posted overall revenues of 10.3 billion euros ($12.2 billion) in the July to September quarter, an 8% year-on-year drop. After reporting its first net loss in 10 years in fiscal 2019, Renault posted a record net loss of 7.3 billion euros for the January to June period, the majority of which stemmed from Nissan's loss.

Mitsubishi Motors, in which Nissan has a 34% stake, recorded a net loss of 209 billion yen for the first half of the year through September, as the Japanese car company faced a slowdown in sales in Southeast Asia, its core market. Mitsubishi, which forecast a net loss of 360 billion for the full year, announced in July it will halt new car launches in Europe while ramping up cost-cutting measures.

Indeed, analysts said it was too early to predict a return to normality for Nissan. Its better-than-expected second-quarter result is "not something unique to Nissan, as sales were also boosted and inventories were reduced at other carmakers," said Seiji Sugiura, a senior analyst at Tokai Tokyo Research Institute.

"Fixed costs may be in decline as planned but it is too early at the moment to judge if 'Nissan Next' is helping the company to turn profitable," the analyst said.