TOKYO -- Nissan Motor wants to get more than just miles out of its electric vehicles. The Japanese automaker also wants to plug its cars into the power grid, making use of vehicle batteries to provide clean electricity to towns when not on the road.

In collaboration with other businesses and local governments, Nissan has begun testing a "virtual power plant" project to aggregate EV batteries as a single power source. The project also includes 100 partnerships with local governments and other entities to promote EVs as backup power sources during disasters.

On Nov. 16, Nissan started tests with trading house Mitsui & Co., Mitsubishi Estate, Tohoku Electric Power and two other companies to create a mechanism capable of controlling and aggregating EV batteries as if they were a single power plant. The experiment will continue through March 2021.

A single EV can supply the equivalent of four days worth of power consumed by an average household. If used as storage batteries, electric vehicles can play an important role in regulating supply and demand for electricity, said an industry observer.

For example, if batteries are charged during hours when power from renewable energy is abundant then discharged during the early evening when electricity demand increases, EVs can serve as clean and efficient power sources. Compensating EV owners for the use of their batteries can evolve into a new business. 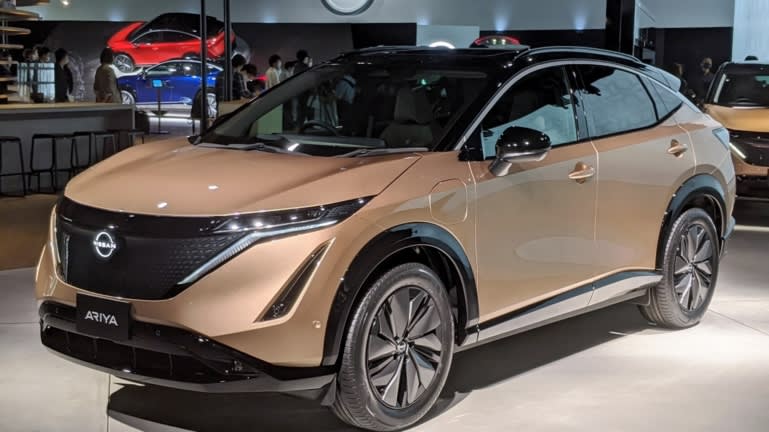 Nissan will release its electric sport utility vehicle Ariya in Japan and elsewhere in 2021.

Nissan and other companies launched tests in 2018 to use EVs as storage batteries and connect them to a grid. Starting this year, the group is set to bring the tests closer to practical application.

Specifically, the group will remotely link EVs and storage batteries installed at a hotel and an aquarium in the city of Sendai to a power grid. Nissan will collect and analyze data on how the linkage affects vehicle driving performance and power consumption.

If anything, putting electric vehicles to work when not on the road will help Nissan market them. The automaker released its first mass-produced electric vehicle Leaf in 2010 but sold only about 140,000 of them due to their high price and limited charging facilities.

At a huge fireworks display on Oct. 31 in the small coastal city Rikuzentakata in Iwate Prefecture, a number of Leafs were used to power audiovisual equipment, including a 400-inch screen. Nissan offered the vehicles under an agreement with the city in July to promote EV-friendly municipalities. 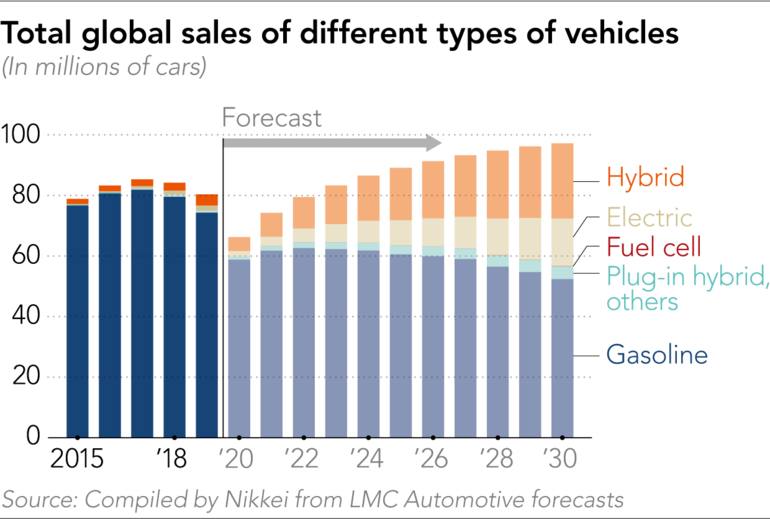 Since 2018, Nissan been running its Blue Switch program that tries to get local governments and businesses to adopt EVs. Earlier this year, it signed accords with the Yamagata municipal government and others to use electric vehicles as power sources in times of disaster. The automaker has also teamed up with travel agency KNT Shutoken to sell tour packages featuring EV car sharing.

The number of partners under Blue Switch topped 100 in November.

The market for EVs is expected to expand as environmental regulations are being toughened around the world. British research company LMC Automotive forecast that electric vehicles will account for 16% of all new cars sold in the world in 2030, up from 3% in 2020.