TOKYO -- The rapid advance of motor vehicle electrification is spurring parts makers to transform their own operations.

Nachi-Fujikoshi, a big Japanese manufacturer of automotive bearings, will move production of general-purpose bearings from Toyama, Japan, and Taiwan to Thailand in response to falling demand for conventional automotive parts.

Nachi-Fujikoshi will build a new 10 billion yen ($80.74 million) factory near its existing plant in Thailand's central Rayong Province. It will transfer production of general-purpose bearings to the new facility, which is slated to go online in February 2022.

The move is aimed at cutting production costs for commodity bearings. The company will use the money saved to win new customers among makers of machine tools and nonautomotive products.

The production shift to Thailand is expected to cost around 200 jobs at the Toyama plant, including contract workers, who will be let go after their contracts expire. The plant had some 2,200 workers, including temporary employees, at the end of November 2020, according to the company's financial statement.

Nachi-Fujikoshi plans to double the share of bearings made in Thailand to 40% of total output by the end of 2022. Remaining plants in Japan and other countries will focus mainly on custom-made bearings, with the Toyama plant concentrating on high-durability products.

Bearings allow the smooth rotation of moving parts in machines. In cars, they are found mainly in engines and transmissions. While internal combustion engine cars have 100 to 150 bearings, electric cars typically have around 30% fewer.

As the growth of EVs eats away at demand for conventional car engines, that for bearings is also declining. This is prompting big component makers such as Denso to tweak their operations. 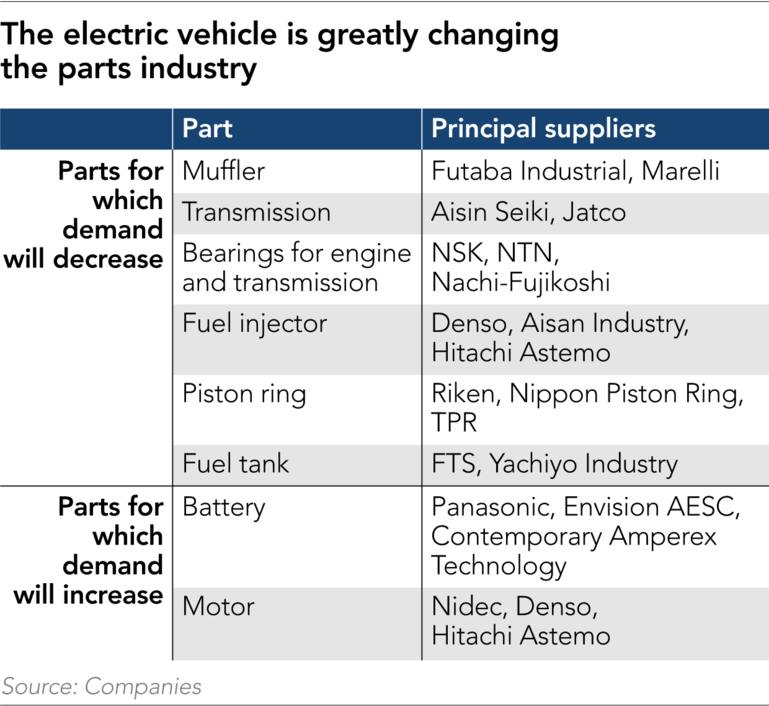 In the business year ended last November, bearings contributed 32% of Nachi-Fujikoshi's 201 billion yen in sales. The company makes 60% of its bearings for automakers, with the rest going to manufacturers of machine tools and other industrial machines.

Nachi-Fujikoshi aims to cut production costs for its bearings by 20% and to find new buyers for its products among makers of industrial equipment. It wants to raise their share of the company's orders to 60% of the total.

Although Nachi-Fujikoshi's industrial machinery bearings are expected to remain more expensive than those made by Chinese manufacturers, the Tokyo-based company believes it can maintain a competitive edge, thanks to its reputation for quality.

Other bearing makers are also sensing change. Market leader NSK sees bearings for small motors used in electric vehicles and wind turbines as a promising market. It plans to spend up to 5 billion yen over the next three years to increase production of large bearings for wind turbines at its plant in China to supply to companies building wind farms around the country.

The growth of EVs is not affecting other auto parts makers as well. Internal combustion engine cars require a complicated transmission system to get power from the engine to the wheels. Battery powered cars require fewer parts -- around 20,000 for an EV compared with 30,000 for a gasoline-powered car, according to one survey. Electric cars do not require piston rings or exhaust equipment.

Auto parts makers are reshuffling their operations in response. Denso will outsource production of fuel pumps to its affiliate Aisan Industry to streamline manufacturing and development work by eliminating overlapping operations.

Continental, a big German auto parts maker, has announced plans to end production of conventional diesel and gasoline engines by 2030. Expecting more electric cars to hit the road in the future, the company spun off its powertrain business in 2019. 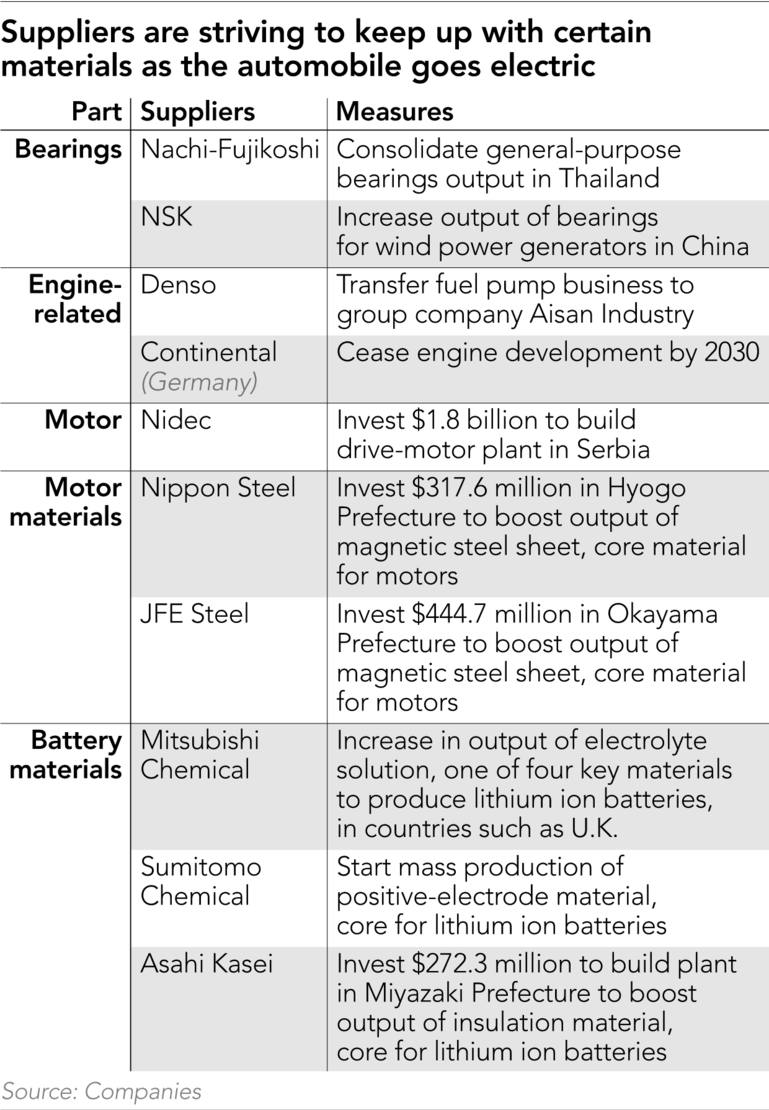 On the other hand, vehicle electrification will lift demand for motors, batteries and other components. While engines and transmissions is forecast to make up 19% of the market for auto parts in 2040, down five percentage points from 2017, the share for motors, batteries and other parts needed for electrification will rise to 13% in 2040 from 9% in 2030, according to a 2019 survey by PricewaterhouseCoopers.

Positioning motors for EVs as a key business in the future, Japan's Nidec is looking to expand in the EV market in Europe in addition to China. It plans to spend 200 billion yen on a motor plant in Serbia.

Mitsubishi Chemical will increase its production capacity for electrolyte solution -- one of the four key materials used in lithium ion batteries -- by around 50%, while Asahi Kasei will spend 30 billion yen to boost output of separators, another key battery input.

Many countries have introduced policies to encourage a move away from gasoline-powered cars. Britain announced last fall that it will ban the sale of new gasoline- and diesel-powered cars by 2030, moving the deadline forward by five years. China plans to require all new car sales in 2035 to be EVs, hybrid vehicles or other environmentally friendly cars.

In Japan, the Tokyo Metropolitan Government aims to make all new car sales electric powered vehicles, such as EVs and hydrogen powered cars, by 2030. British market research specialist LMC Automotive forecasts that the share of internal combustion engine cars will drop to 54% of the total in 2030 from 89% in 2020. This points to faster changes in the parts industry as well.