While Toyota and VW thrive, Japan-France group focuses on road to recovery TOKYO -- Nissan Motor's general shareholders meeting Tuesday spotlighted the struggles of the automaker's alliance with Renault and Mitsubishi Motors, a partnership that initially promised to rival the likes of Toyota Motor and Volkswagen.

Nissan CEO Makoto Uchida apologized to investors for the gap that has opened between Nissan and its rivals, and also for the company's poor earnings.

"If you can wait a little longer, we will get results," he said. "Please give us time."

The Japanese automaker expects a net loss of 60 billion yen ($545 million) for the year ending March 2022, which would mark a third straight year in the red for the first time in more than two decades.

Nissan, Renault and Mitsubishi Motors logged more than $15 billion in combined losses last fiscal year, even as Toyota and Volkswagen continued to turn a profit despite the coronavirus pandemic. The contrast in fortunes has stoked investor skepticism about the French-Japanese partnership.

These doubts were put front and center Tuesday with an investor proposal that called for disclosing the Restated Alliance Master Agreement, which sets the terms of Nissan's relationship with top shareholder Renault. 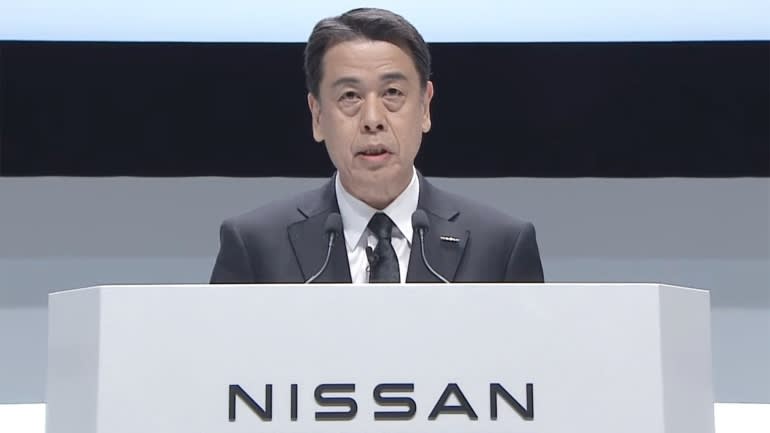 Though the proposal was voted down, it highlighted investor frustration with the lack of clear benefits from the relationship.

"The three-way alliance is meaningless unless they consolidate factories and dealerships more," an investor in his 60s said after the meeting. "It's as if Toyota advances five steps in the time Nissan takes one step."

When Mitsubishi Motors was brought into the fold in 2016, the trio boasted global sales on par with Toyota and Volkswagen, but the latter two groups have since pulled ahead.

The alliance sold 9.67 million vehicles worldwide that year, only 620,000 behind the market leader. But that gap widened to 2.6 million in 2020. Toyota's sales grew by 230,000 even amid the pandemic. Volkswagen's sales slid by nearly 1 million, much less than the alliance's drop of 1.87 million units.

The three alliance members have not stood idly by amid this decline. The companies announced a new joint medium-term plan in May 2020 that centers on cost-reduction measures, putting greater emphasis on shared production and joint development of models.

Nissan has decided to shut two plants, and the automaker has slashed labor and other fixed expenses by 350 billion yen through last fiscal year. Renault is cutting payroll as it looks to trim 2.5 billion euros ($2.97 billion) in fixed costs by 2023.

"Our sales in April and May exceeded our projections," Uchida said. "We're still in the middle of our recovery, but Nissan is steadily improving."

Nissan, Renault and Mitsubishi Motors have a total of 91 factories worldwide, compared with Toyota's 75 and Volkswagen's 85, according to research company MarkLines. This is despite the alliance's lower overall sales, suggesting excess capacity remains to be cut. The difference is particularly apparent in China, where the alliance has 14 plants -- the same number as Volkswagen, which sells more than twice as many vehicles there.

"It's hard to see productivity-improving results from the alliance, and there's not much synergy," said Seiji Sugiura of the Tokai Tokyo Research Institute.

Both Nissan and Renault were early movers on electric vehicles -- now a major battlefield for automakers -- with the former rolling out the Leaf in 2010 and the latter launching the Zoe in 2012. Yet their global shares of that market came to just 4% and 5%, respectively, last year, well behind Tesla's 23%.

Uchida told shareholders Tuesday that the company aims to issue a long-term strategy this fall that will include plans for going electric.