Suzuki, the top-selling automaker in India, is struggling with declining sales along with most manufacturers in the country. It expects unit sales to fall 20% in the year to March 2020 versus the previous year.   © Reuters
RYO ASAYAMA and AKIRA HAYAKAWA, Nikkei staff writersNovember 8, 2019 18:09 JST | India
CopyCopied

TOKYO/MUMBAI -- Japan's Suzuki Motor has postponed the opening of a new plant in western India, Nikkei has learned. The plant, originally scheduled to go online in April 2020, will now begin operating next July.

Suzuki's decision to postpone the startup is the latest in a string of efforts by Indian carmakers to deal with a softening market. Suzuki Motor Gujarat, a wholly owned local subsidiary, is building the new plant in the state of Gujarat. The $550 million factory will raise the company's capacity in India by 250,000 cars annually to 2.25 million.

India's auto market is sluggish and likely to remain so, with new car sales in 2019 expected to fall below the previous year's levels for the first time in five years. Suzuki was forced to push back the opening of the new plant to assess demand.

India is the world's fourth-largest auto market, with 4.4 million new cars sold in 2018, ahead of Germany's 3.82 million. However, sales began falling last November and the declines widened to double digits starting in April. The slowdown in India has confounded automakers around the world, which had been banking on growth. That is exacerbating a global sales slump.

Maruti Suzuki, Suzuki's local subsidiary and the country's largest automaker, and Mahindra & Mahindra, the third-largest local manufacturer, idled plants for several days in the July to September quarter due to sluggish sales. Maruti did not extend the employment of 3,000 contract workers in August, while Tata Motors, the No. 4 carmaker, has decided to accept a 65 billion rupee ($910 million) bailout from Tata Group, the conglomerate to which it belongs.

Suzuki has set an ambitious target for India, hoping to raise sales to 5 million cars a year by 2030. The move to postpone the opening of the Gujarat plant is temporary, the company says, but the outlook is murky. It may have to reassess its long-term strategy if the opening is pushed back for a long time.

"I think we need to watch [for] maybe three months to see what the market is up to in January before we can make a somewhat more certain prediction," said Maruti Chairman R.C. Bhargava in an interview with Nikkei on Oct. 24.

On Tuesday, Suzuki said it expects sales in India to fall 20% on the year to about 1.4 million cars in the year ending March 2020. With sales tepid in the country, which accounted for 30% of Suzuki's total revenue, the company's net profit for the current business year is now forecast at 140 billion yen ($1.28 billion), down 22% from the previous year. 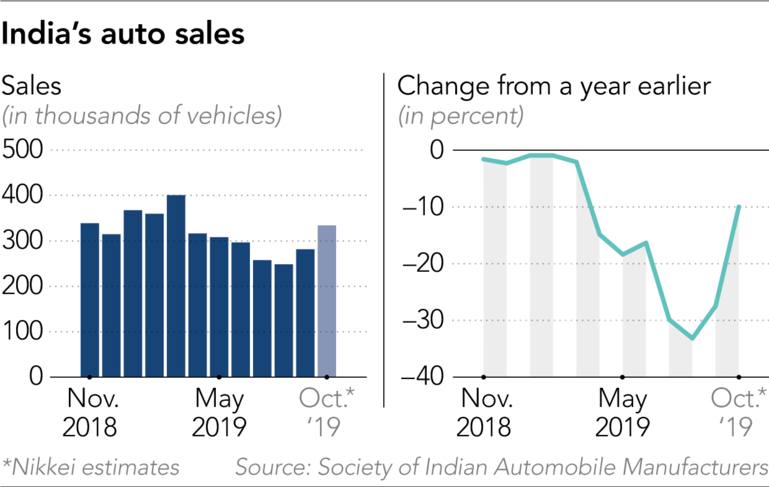 According to an estimate by Nikkei, the Indian car market contracted by about 10% in October from a year earlier. That was the 12th straight month of year-on-year declines. A fall for the 2019 calendar year now appears inevitable. Factors contributing to the slowdown include reluctance by financial institutions to extend car loans to buyers, and rising insurance costs. Higher road taxes in several states have also depressed demand.

In October, the pace of decline eased, thanks to aggressive price cuts by manufacturers, but it is uncertain when the market will recover. Total sales are expected to fall below 4 million cars for the first time in three years in 2019. The Indian Automobile Manufacturers Association will soon release official industry statistics for October.

Among the major automakers that announced unit sales for October, Maruti posted a 3% rise, while the other six saw sales fall. South Korea's Hyundai Motor, the No. 2 seller, logged a 4% drop. Japan's Toyota Motor, the sixth-largest seller, had a 6% decline. Tata Motors and Honda Motor saw their sales skid, falling 29% and 32%, respectively.

"We don't have a very good response from customers these days," said Rakesh Sharma, a sales executive at a Tata Motors showroom in New Delhi. "Even when people come, they look around and go back. They don't buy," he said.

Three Bombay-listed automakers have also been hit by the fallout. Maruti saw its net profit fall 39% from a year earlier in the July to September quarter, widening from a 27% drop in April to June. Tata posted a nonconsolidated pretax loss of 12.7 billion rupees in July to September. The company posted a profit of 1.5 billion rupees a year earlier.