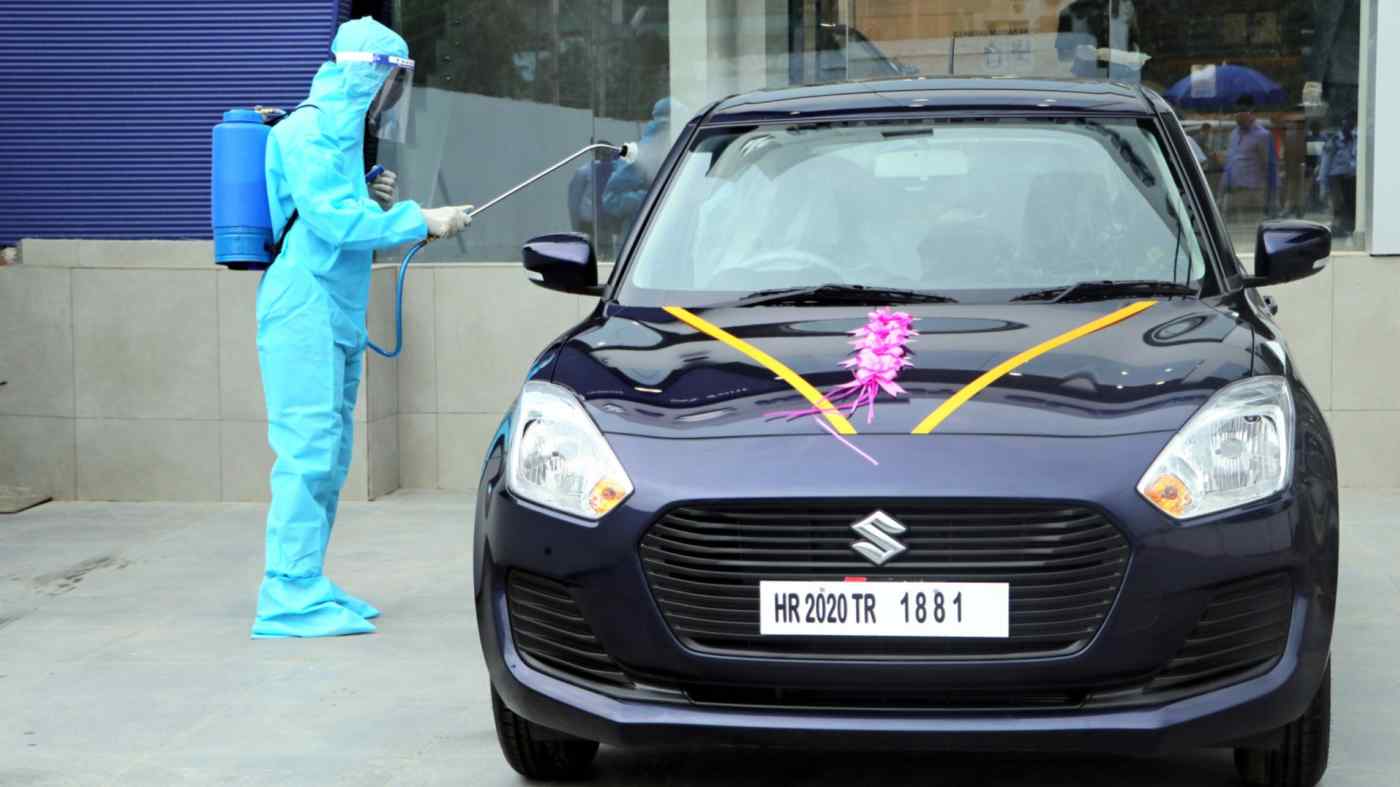 A worker sterilizes a car at a Maruti Suzuki dealership before it is delivered.
YUKIHIRO OMOTO, Nikkei staff writerJune 3, 2021 11:26 JST | India
CopyCopied

TOKYO -- It is a market where Suzuki Motor once reigned as the undisputed champion. Forty years ago, nearly every passenger car sold in India was made by the Japanese automaker. Now this share is under 50%, and the competition only looks to increase.

Suzuki still makes half its car sales in the country, and the automaker's stock price has foundered as business in India essentially ground to a halt last month when the company closed all three auto plants. Beyond the immediate hit, however, investors are worried about Suzuki's ability to generate profits.

As of Wednesday, Suzuki's share price has dropped 6.6% from an April 2 peak. But more widely, the Japanese automaker's stock also has gained just 7% from the end of 2019, compared with 25% for Toyota Motor and 14% for Honda Motor.

The operating profit margin at Maruti Suzuki India, the subsidiary handling passenger car sales in the country, slipped 1.9 percentage points to 3.3% last fiscal year, which ended in March and was dominated by the pandemic. Yet this margin was a much steeper decline from the 11.9% achieved in fiscal 2017, Maruti Suzuki's highest since the turn of the century. The subsidiary's operating profit also has plunged about 80% over that period.

The weaker earnings reflect stronger competition from South Korean and local rivals. During the 1980s, almost every passenger car sold in India was a Suzuki. But the automaker's India share fell 3.3 points to 47.7% last fiscal year -- below the 50% threshold that Suzuki had considered crucial.

And price competition is intensifying. The Franco-Japanese alliance of Renault and Nissan Motor has fared well in India amid the pandemic by debuting sport utility vehicles that are about 30% cheaper than Suzuki's. Tata offers two SUV models priced slightly lower than those from Suzuki, while local company Mahindra & Mahindra's electric SUV costs just $11,600 for buyers who use government subsidies.

Suzuki's declining profitability means the automaker no longer can operate as efficiently in India as it once did. The company's return on assets -- a measure of how efficiently it uses factories and other assets -- slipped almost 1 point to 6.3% last fiscal year, according to Nikkei Value Search.

Though Suzuki's ROA tops the 3.1% for both Honda and Subaru and dwarfs Mazda's 0.2%, the figure has fallen 6.2 points from fiscal 2017, when the ROA was the highest in the past decade.

To get back on track, Suzuki needs to expand its lineup of electrified vehicles, possibly by launching the EVs that were slated to debut in 2020 but still have not hit the market.