Recertification by importers to be axed, reducing risk of non-tariff barriers BANGKOK -- Thailand's automobile industry has welcomed a landmark accord by the Association of Southeast Asian Nations that skirts testing regulations imposed by some importing nations, a move seen to benefit the largest automaking country in the region.

The new accord -- known as the ASEAN Mutual Recognition Arrangement -- reached by economic ministers at a virtual meeting chaired by Vietnam last month allows cars that have been tested and certified by the production country to enter other member states without having to undergo another round of testing.

"We have high hopes that automobile trade in ASEAN will be accelerated [due to the agreement]," said a spokesperson at Toyota Daihatsu Engineering and Manufacturing, a Thailand-based company that oversees Toyota Motor's Asian operations. The company expects savings in time and costs incurred with recertification.

The deal also prevents importing countries from using the certification process as a "non-tariff barrier" to protect their own industries, said Auramon Supthaweethum, director-general of the trade negotiations department at the Thai commerce ministry.

Such behavior has precedent in Asia. In January 2018, Vietnam reduced import tariffs for automobiles from 30% based on an ASEAN agreement, but stepped up testing requirements of new vehicle imports, leading to a halt in trade from Thailand and Indonesia for several months. It was not until March this year that Vietnam relaxed its certification rules and normalized auto imports. 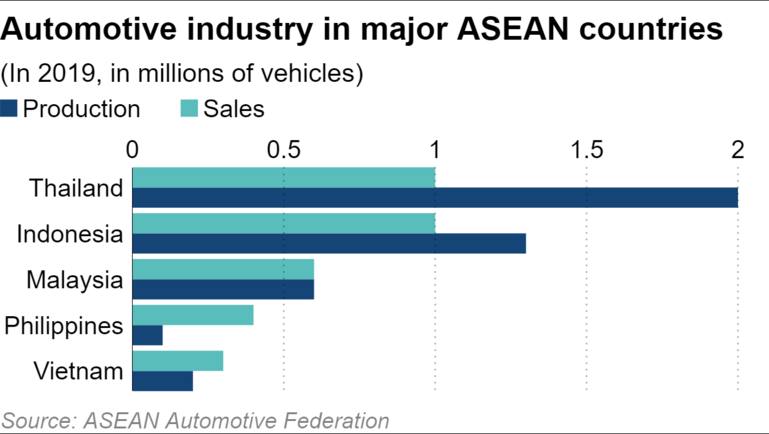 Auramon said it took 13 years for ASEAN to establish standards that are acceptable to all member states. The agreement reached at the August ministerial meeting marked an important step in the 10-member bloc's efforts to further liberalize regional trade.

Until now, automakers in Thailand and Indonesia -- the main vehicle exporters -- have borne high certification costs for their vehicles to meet conformity assessment standards in both importing and exporting countries. Once the agreement comes into effect, automakers will only have to pay one of the costs.

In addition, the certification process was so time-consuming that carmakers often had to delay the rollout of new vehicles by three to six months while waiting for approval.

The deal will "make it easier to debut a new car in several countries [in the region] at the same time," said Ryohei Gamada, Bangkok-based senior economist at the Japan External Trade Organization. 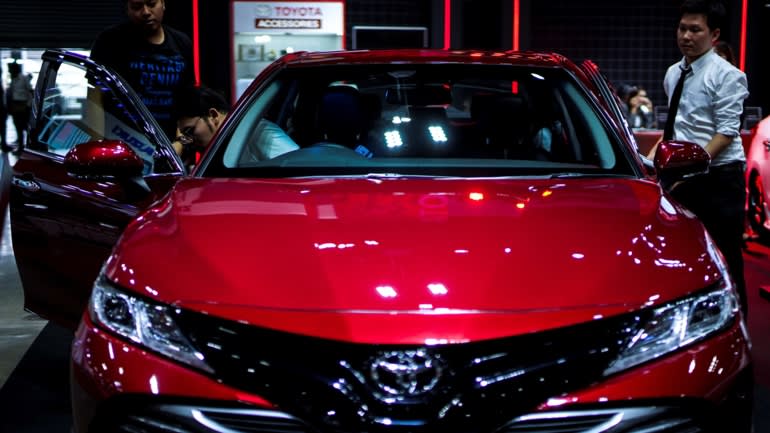 Visitors look at a Toyota car at an auto show in Bangkok. Thailand has been the biggest automobile producer in Southeast Asia housing many manufacturers including the Japanese giant.   © Reuters

According to a joint statement by economic ministers after the August meeting: "The Ministers were pleased with the finalization and imminent signing of the ASEAN Mutual Recognition Arrangement on Type Approval for Automotive Products."

The accord now needs to be signed by trade ministers of member countries. The arrangement is expected to come into effect by the last quarter of this calendar year, according to Chotima Iemsawadikul, director-general of the bureau of ASEAN economics at the Thai commerce ministry.

Apart from automobiles, ASEAN is also working on agreements for other products, including building and construction materials, to foster trade within the bloc.

In 2019, Toyota made 900,000 vehicles in the ASEAN region. Of those, 570,000 units were produced in Thailand, making the country the fourth-largest producer of Toyota vehicles. Toyota considers Thailand a key production base for its pickup trucks and compact cars and exports half of vehicles built there to other ASEAN members and Oceania.

Other automakers -- including Japan's Mitsubishi Motors, Isuzu Motors and Nissan Motor, as well as Ford Motor of the U.S. and MG, which is owned by China's SAIC Motor -- also regard Thailand as their export hub thanks to a well-developed supply chain.