BANGKOK -- Thailand's automobile output shrank for four straight months through August, an industry group reported on Sept. 17, as a result of weakened domestic spending and downward pressure on exports that could spell trouble for Japanese automakers.

Overall auto production last month shrank 8% on the year to 166,361, the Federation of Thai Industries reported. This follows data from June that shows auto purchases dipped below the year-earlier number for the first time in 30 months. Sales in July receded by 1%.

This pattern mirrors declines in sales seen across Southeast Asia. The slower production is especially problematic to Japanese automakers, which count Thailand as the biggest manufacturing center in Southeast Asia.

The main reason behind the sales decline is tougher standards for auto loans. "The rejection rate by credit checks has reached 20%," said an executive at a manufacturer.

Ballooning household debt has caused creditors to increase scrutiny against potential borrowers. The balance of household debt stood at roughly 13 trillion baht ($425 billion) at the end of March, up 6% from a year earlier. 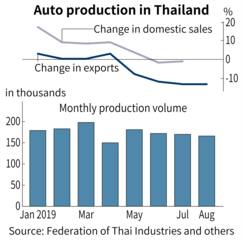 Thai farmers, a key target market, have less spending power as the U.S.-China trade war has affected the global economy. Amid those tensions, the price of natural rubber decreased to a low not seen in roughly three and a half years at the end of August. That dynamic affected pickup truck sales, which account for half of Thailand's new vehicles sales.

Japanese automakers hold a roughly 90% market share in Thailand. Due to the lack of competition, the contingent secures high profit margins within the borders. Last year, Thailand produced 2.16 million vehicles, the first time in five years the number has topped 2 million.

Automobiles for export constitute roughly half the output by Japanese automakers in Thailand. For Isuzu Motors, the country is the biggest market in the Asia region, which generated 30% of the sales in the fiscal year ended March, with Japan coming first at 50%. When it comes to operating profit, Asia earns half of Isuzu's income.

But the baht has appreciated approximately 6% against the dollar since the start of the year, touching six-year highs. The currency fluctuation damaged Isuzu's exports to Australia and the Middle East. The strong baht reduced Isuzu's profits by 3 billion yen ($27.8 million) during the April-June quarter.

"The negative effect is greater than anticipated," said Shinsuke Minami, an Isuzu board director.

Toyota Motor's output in Thailand grew 9% on the year to 300,000 units during the first half of this year. Production subsequently sank 11% in July. Japan's largest automaker apparently is slowing down production lines in response to shrinking sales in Thailand and a downturn in exports.

For Toyota, Thailand is the fourth biggest manufacturing base after Japan, China and the U.S., respectively. The company sells sedans and pickup trucks made in Thailand to other markets in Southeast Asia, as well as Australia.

"I feel that the activity has weakened in the market and that economic conditions have entered into a slowdown phase," said Michinobu Sugata, the president of Toyota Motor Thailand. 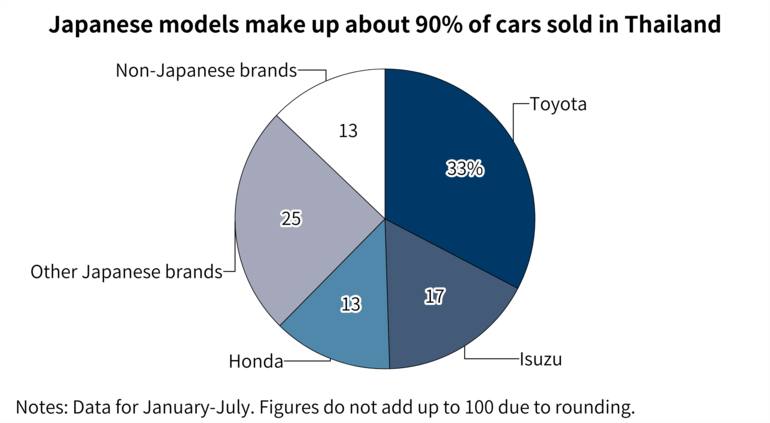 Mitsubishi Motors operates three assembly plants in Thailand, which is the company's biggest production capacity outside of Japan. But Mitsubishi's output has undershot year-earlier figures since March. Production shrank 8% during the entire first half of the year, and retreated 2% in July.

For the first quarter ended June, Mitsubishi's consolidated operating profit plunged 86% to 3.9 billion yen. The automaker remained in the black because the 11.5 billion yen generated by Thailand and the rest of Southeast Asia had offset money-losing operations in Japan and North America. If Thailand continues its downturn, it would put a further dent on Mitsubishi's finances.

Non-Japanese automakers, already smarting from tiny market shares in Thailand, are starting to wave the white flag. General Motors, whose share hovers below 2%, implemented cuts affecting over 300 jobs in Thailand, or 15% of the workforce. India's Tata Motors will cease local production entirely by next March.

In Southeast Asia, the prime export destination for Thailand, auto purchases have waned as well. In July, new auto sales fell 9% to 290,474 units in six major countries, including Thailand, marking the largest year-on-year decline in 2019.

Sales between January and July shrank by 1%, which does not bode well for breaking the record of 3.57 million autos sold last year.

Like Thailand, Indonesia is dealing with lower commodity prices, namely coal and palm oil exports. Because of the sullen economic sentiment among consumers, new car sales plunged 17% in July to 89,110 units.

That same month, sales in Malaysia decreased by 26% to 50,583 vehicles. The decline was mainly due to a rebound effect from last year, when the newly elected government of Prime Minister Mahathir Mohamad essentially repealed a sales tax, which boosted auto sales.

There were a couple of bright spots in the region for automakers. Vietnam saw auto sales jump 23% in July. When the government introduced vehicle import controls in 2018, auto sales took a hit, but this year is on track to set a new annual record. In the Philippines, auto sales climbed 8% in July, marking the sixth straight month of growth.