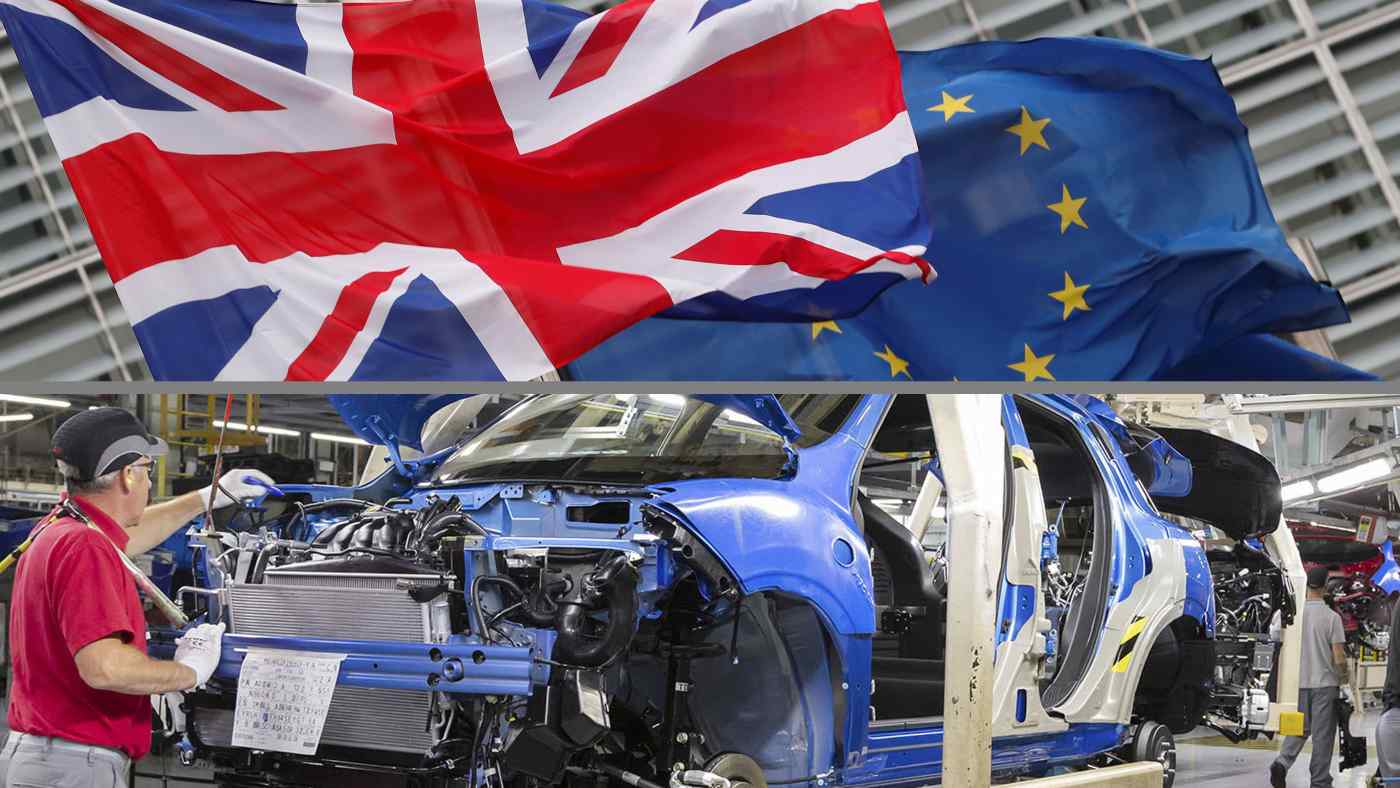 FRANKFURT -- Japan's Toyota Motor and Nissan Motor are demanding that the British government cover additional tariffs that could arise if the country cannot conclude a free-trade agreement with the European Union, Nikkei learned on Monday.

The U.K., which left the EU in late January, is in a transition period that allows the country to enjoy until the end of this year zero tariffs the same as when it was a member of the EU. If the two parties cannot agree on a deal and the transition period ends on Dec. 31 without one, tariffs on passenger cars will jump to 10% from Jan. 1, 2021.

Prime Minister Boris Johnson has said that going into next year "without a deal" is acceptable if the U.K. and the EU cannot agree on one by the time of an EU summit on Oct. 15.

The Society of Motor Manufacturers and Traders estimates that increased tariffs will cost automakers an additional 4.5 billion pounds ($5.82 billion) a year. It will be impossible for the manufacturers to cover the increased tariffs if the government refuses to do so, which could cause foreign carmakers to flee the U.K.

In addition to Nissan and Toyota, BMW and Jaguar Land Rover Automotive are making cars in the U.K. Nissan and Toyota executives acknowledge that they are demanding that the U.K. cover an increase in tariffs. European carmakers are also calling on the U.K. government to do the same, according to sources. A BMW spokesperson, however, said the German automaker will not comment on speculation.

Britain, for its part, will continue to focus on securing a free trade agreement in talks with the EU.

"We remain committed to working with the automotive industry to try to ensure an outcome that reflects business interests across the U.K.," said a government spokesperson. "A negotiated outcome remains our clear preference. We have put forward our proposals and are working hard to reach a deal with the EU -- our aim is a zero tariff, zero quota free trade agreement, as avoiding tariffs is beneficial to both sides."

About 1.3 million vehicles were made in the U.K. last year, nearly half of which were manufactured by Japanese companies Nissan, Toyota and Honda. Exports to the EU accounted for 44% of British-made vehicles.

Given that Nissan and Toyota's profit margins are expected to be in a narrow range of several percent, it will be almost impossible for them to absorb a rise in tariffs by slashing costs. If an increase in tariffs is reflected in prices, the Japanese carmakers will become less competitive in the EU market and make it difficult to continue doing business in the U.K.

Toyota hinted in March 2019 at withdrawing from the U.K. if 10% tariffs are imposed, while a Nissan executive also said in October 2019 that an increase could put the company's business model in Europe at risk.

Last year, BMW Chief Executive Oliver Zipse, who was a member of the board of management at the time, said the company will remain in the U.K. if the country and the EU can agree to keep any tariffs under 5%. The German carmaker makes the Mini brand in the U.K.

It will be difficult for British government to cover the increased tariffs due to a financial squeeze resulting from the coronavirus pandemic. Bailing out the car industry, which is dominated by Japanese, German, French and Indian companies, could provoke a backlash from other industry sectors such as pharmaceuticals and airlines, which had demanded government support when the country decided to leave the EU. Such pressure is also aimed at pushing the government to resolve the deadlock and strike an FTA with the EU.

Local media reported that the EU will not bend tariff rules for carmakers operating in the U.K., and the two sides haven't been able to find common ground. If talks breakdown, the U.K. will be forced to decide whether it will cover the increased tariffs by the end of the year.

Honda Motor has already decided to end production in the U.K. next year.

Carmakers and related businesses will have to think of scaling down or closing businesses, depending on the government decision.

The automakers' demand for tariff compensation is "an unusual case," in the view of Keisuke Hanyuda, CEO of Owls Consulting Group and who has expertise in trade issues. Compensation would be equivalent to a subsidy and amount to companies operating in the U.K. receiving trade preferences, a possible violation of World Trade Organization rules.

Behind the automakers' strong stance in demanding compensation is that if an FTA cannot be reached, then demands will likely emerge for aid policies for the manufacturing industry. In concrete terms, that could mean measures such as consolidation of automobile testing certification for exports to the EU and tax reductions for investments in research and development.