The 4.8-meter-long concept model displayed at the 2018 CES consumer electronics show, which opens to the general public Tuesday, is just one possible version of the e-Palette self-driving electric vehicle that the leading Japanese automaker envisions.

Working with such diverse partners as Amazon.com, Didi Chuxing Technology, Mazda Motor, Uber Technologies and Pizza Hut, Toyota may produce vehicles in various sizes, ranging from 4 to 7 meters in length, and different configurations to be used not only for transporting people, but also delivering goods and even serving as movable shops and hotels.

Toyota is looking to start road-testing the vehicles in the U.S. in the early 2020s, looking past simply building them to creating new associated businesses, including insurance, payment settlement and maintenance.

This "marks a major step forward in our evolution towards sustainable mobility, demonstrating our continued expansion beyond traditional cars and trucks," President Akio Toyoda said in a news release for a preview event for the CES, which opens to the public Tuesday.

When commercialized, the e-Palette type of vehicle is expected to offer "level 4" autonomous driving capability, which is called by the industry "high automation." Such vehicles will be able to operate fully autonomously in limited areas. The company is looking to deploy models at the 2020 Tokyo Olympics to transport associated personnel.

This is the first time the Toyota president has appeared in a CES-related event and voiced his vision for the company's future. The move is seen as a sign of the automaker's desire to reduce its dependence on the traditional business model in the rapidly evolving auto market. 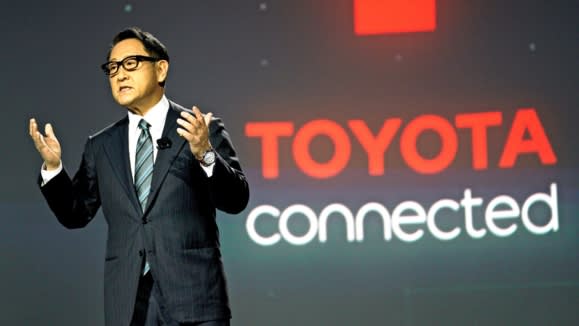 Toyota Motor President Akio Toyoda introduces the e-Palette, a self-driving electric vehicle series to be used for ride-hailing, parcel delivery services and other functions in the future, at a CES preview in Las Vegas on Monday.   © Reuters

Toyota saw its worldwide sales increase 2% on the year to 10.35 million units in 2017, setting a new record for the first time in three years. But the growth curve has unmistakably flattened since 2013.

As automakers across the globe race for the lead in developing technologies for the brave new world of "CASE" --  connected, autonomous, shared and electric -- vehicles, there is a growing awareness in the industry of a need to change the mindset. "As cars are changing to a thing to share from a thing to own, it is no longer an age for automakers to chase after continued production-scale growth," says a high-ranking Toyota executive.

The Japanese automaker is looking to develop new transportation businesses by expanding cooperation with companies outside its industry. But it will have to compete against not only automakers, but also nimble information technology companies and startups.

"It's my goal to transition Toyota from an automobile company to a mobility company, and the possibilities of what we can build, in my mind, are endless," Toyoda said in a speech.