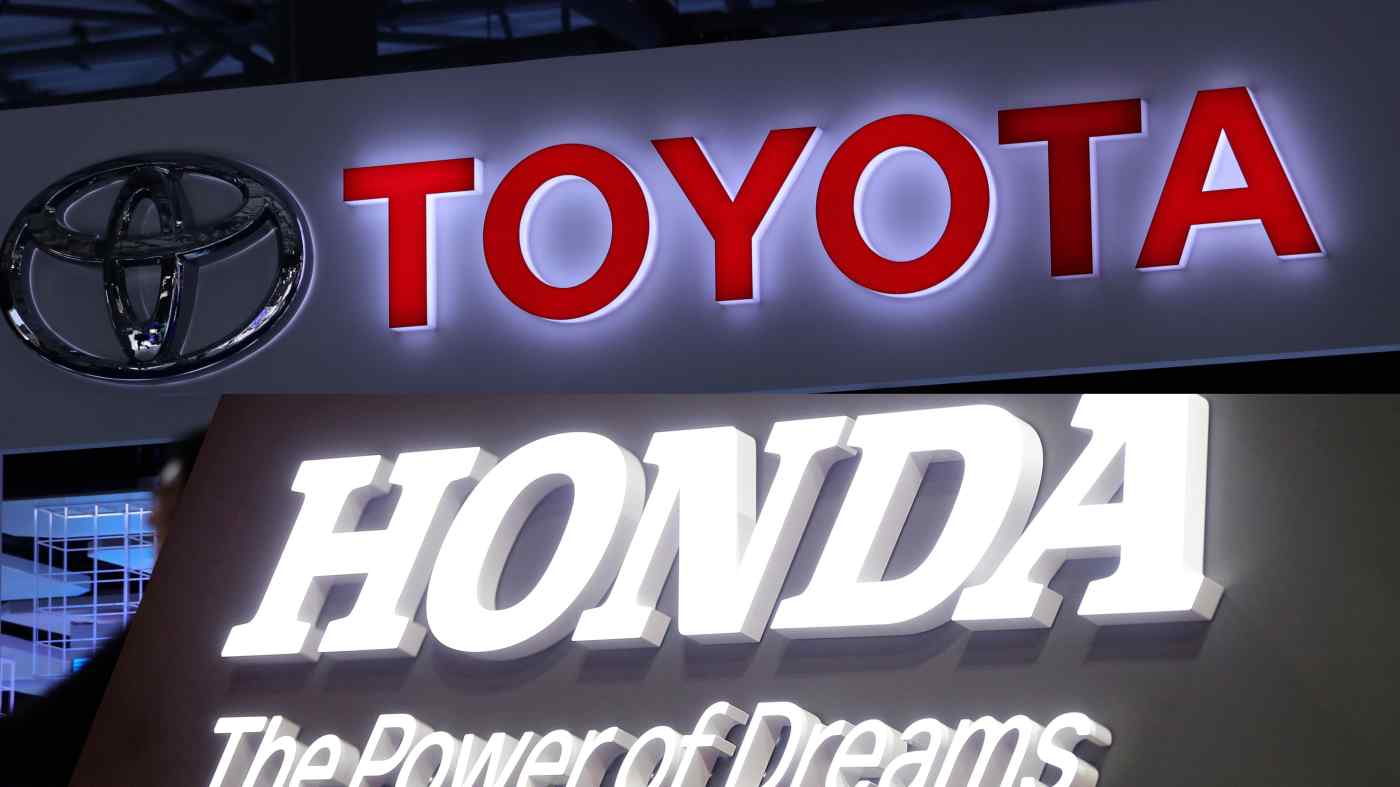 TOKYO -- Toyota Motor on Wednesday reported a net profit of 897.8 billion yen ($8.2 billion) for the April-June period, a record amount for the quarter, thanks to robust sales in North America and China that reached pre-pandemic levels.

The automaker, however, kept its net profit forecast for the year through March 2022 at 2.3 trillion yen as it anticipates rising raw material costs and other headwinds.

Honda Motor on the same day upwardly revised its annual earnings projection to a net profit of 670 billion yen, up 80 billion yen from what it forecast in May, triggered by increased sales and cost-reduction measures.

The latest projection translates into a net profit increase of 1.9% rather than a previously anticipated decrease.

Its shares fell on Wednesday after the announcement, at one point dipping 2.3% as investors were expecting Toyota to upwardly revise its annual forecast.

Toyota sold 5 million vehicles during the first six months of this year, up 32.7% from the same period last year and a 4.5% increase from 2019, driven primarily by sales in the U.S. and China.

The Highlander and other light trucks as well as the Camry and other sedans have been well received by North American buyers. In China, the Corolla and Lexus models are experiencing increased sales.

The U.S.'s speedy vaccination rollout and China's success in containing the virus have helped boost demand for new vehicles.

"In the first quarter, we have seen the results of our improvement activities despite the severe business environment," the company said in a statement. "We will continue these activities in the future, but the situation is still unpredictable due to the expansion of COVID-19 in emerging countries, the semiconductor shortage and soaring material prices."

Honda expressed similar sentiments. Despite an earnings revision prompted by a recovery in global demand, the automaker said it now expects to sell 4.85 million vehicles this fiscal year, down from the 5 million it previously anticipated. The smaller number is mostly due to ongoing chip shortages.

In May, Kuraishi told reporters that the automaker would make up for lost output in the second half of the fiscal year.

The executive vice president on Wednesday added that Honda plans to improve its management of global parts inventories. Should a surplus of semiconductors occur in Southeast Asia, where COVID lockdowns have resulted in plant closures, Honda plans to send the surplus to factories in Japan and China.

Both Toyota and Honda have come under pressure from soaring prices for raw materials needed to cope with tougher auto emissions standards in China and other big markets. The regulations are driving increased demand for rare metals like rhodium, used in catalytic converters, which control emissions.

Prices are also on the rise for lithium and other crucial battery materials as well as for the steel, aluminum and plastic that go into conventional auto parts.

In Southeast Asia, the delta variant has become a big concern in the fight against the coronavirus, which continues to disrupt the supply of auto parts.

In Thailand, a regional production hub, Toyota has been gradually suspending production since late July as infections among parts maker employees hinder supplies. Plants in Vietnam, Malaysia and Japan have also suffered suspensions.

Although Toyota was believed to have been mitigating the damage from the global semiconductor crunch thanks to its stockpiling practices, the company on Monday halted some lines at a domestic plant due to an undersupply of chips. The suspension will continue until Friday.