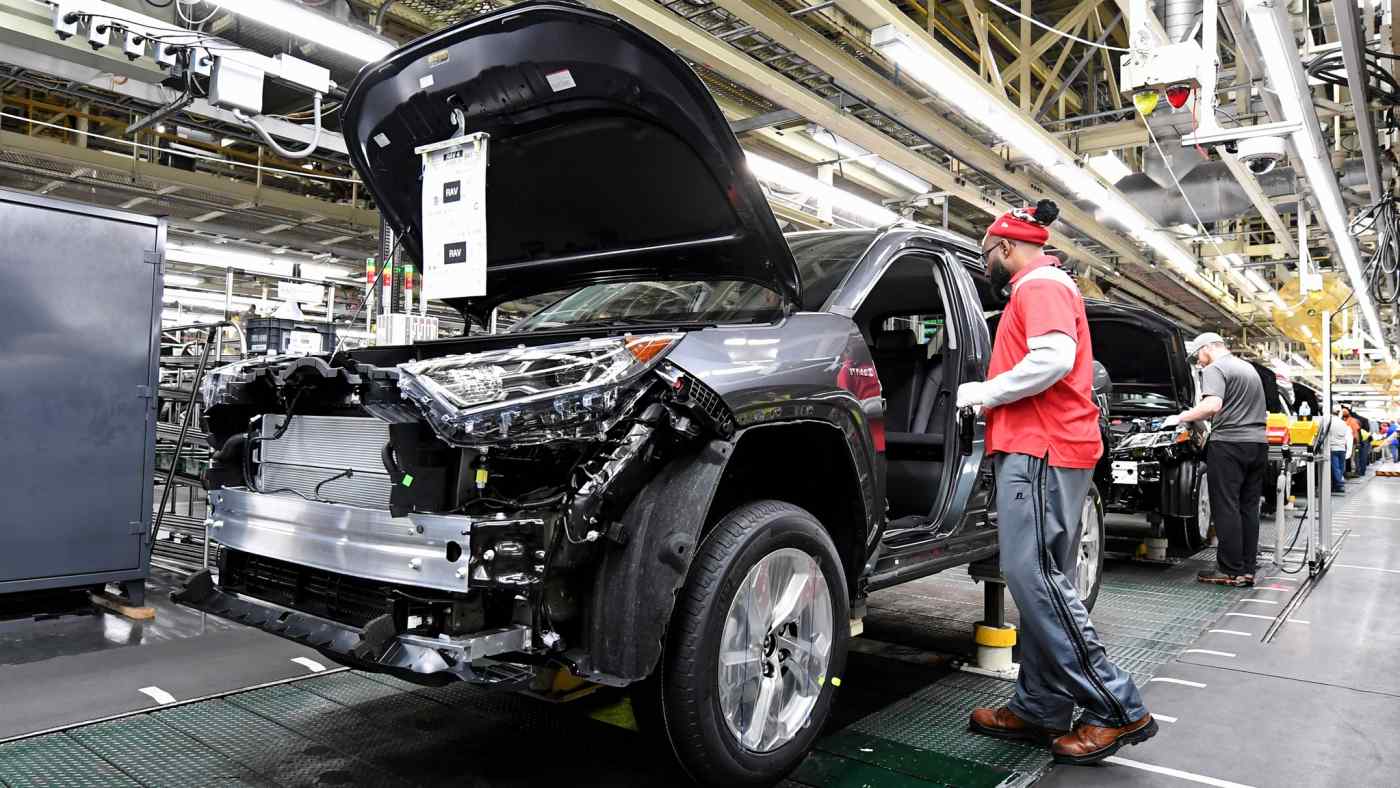 TOKYO -- Toyota Motor scored a major profit jump for the January-March quarter even as the global semiconductor shortage squeezes its rivals by applying its flagship philosophy of kaizen -- the pursuit of continuous efficiency improvement -- to its supply chains.

But with chips only expected to increase in importance in an industry shifting toward electric and self-driving cars, the automaker is now considering taking a step further by departing from its "just-in-time" approach to plan orders years in advance to ensure access to the crucial component.

Toyota logged a roughly 140% increase in group net profit on the year to 777.1 billion yen ($7.15 billion) in January-March, according to earnings results announced Wednesday. The figure represented a significant lead over rivals like Volkswagen and General Motors that were heavily affected by the global chip shortage.

The shortage is driven by a production surge of electronics, automobiles and other high-tech products following a coronavirus-induced lull. A March fire at a chipmaking factory for Renesas Electronics, a major automotive supplier, only exacerbated the issue.

But at an earnings briefing on Wednesday, Kenta Kon, Toyota's chief financial officer, said the automaker "is not expected to suffer a major impact" from the shortage despite some risks. Toyota also does not expect the shortage to significantly dent its full-year results.

Toyota also appears to be leading the post-pandemic recovery in auto production. Toyota's monthly output in March was 18% higher than it was in January 2020 while Volkswagen's was 13% and General Motors' was only up 3%, according to research company MarkLines.

Toyota sources much of its semiconductors from Denso and other close suppliers in its home market of Japan. Meanwhile, Western automakers have been hit hard by delays at megasuppliers since the beginning of the year.

Stellantis, which was formed this year through a merger of Fiat Chrysler and Peugeot maker PSA, predicts a major setback in April-June due to delays in chip delivery. Ford Motor, Daimler and BMW, as well as several Japanese and South Korean automakers, also face potential disruptions to production.

Meanwhile, Toyota "will probably be able to scrape by," a company executive said. Still, the automaker has slowed production of pickup trucks in the U.S. since the beginning of the year, and has stopped taking orders for the Lexus IS sedan.

To better deal with the shortage, Toyota is applying its kaizen philosophy to inventory management.

Toyota does not maintain backup stock of components at its factories, instead ordering items from suppliers as they run out in the so-called just-in-time system. While Toyota can track which supplier factories are in operation following a natural disaster or some other emergency, it had no way of monitoring inventory levels at individual suppliers.

Details have yet to be ironed out. But the new framework could monitor inventory levels at chipmakers and other suppliers, as well as parts that are in transit.

"There's been debate on who in the group should hold how many days' worth of inventory and where," said an executive at Toyota Tsusho, a group trading house.

"Instead of looking months ahead, like we have so far based on meticulous production plans, we should be looking two to three years from now and securing supply on an annual basis," a Toyota executive also said.

The automaker currently informs suppliers of its production plans up to three years in advance, and updates its three-month schedule every month. But orders are essentially only finalized the month before.

Toyota is looking to update its supply schedule with an eye on connected, autonomous, shared and electric vehicles. Chips are crucial to sensors and information technology systems required for these next-generation vehicles.

The cost of semiconductors required to build each vehicle has increased roughly 40% from 2013 to 2019, according to Goldman Sachs, and the figure is only expected to increase as the industry shifts toward EVs.

Still, "only a few percent of chipmakers' output go to the auto industry," a Toyota executive said, expressing concern about where the industry ranks in terms of priority compared with smartphone or appliance makers.

Maintaining an inventory buffer runs counter to Toyota's long-held just-in-time approach, and could result in higher costs and a lower asset efficiency. Still, in light of the disruptions from the 2011 Fukushima earthquake and tsunami and the current chip shortage, the big question for Toyota is whether it can maintain a stable output amid growing competition over chips and other components that help power next-generation cars.

Some automakers are looking to produce more components in-house, like Tesla with its plan to produce its own EV batteries. But each vehicle is said to require 30,000 components, and Toyota faces a groupwide debate on how it can bolster its just-in-time approach to meet rising challenges.