HANOI -- The organizer of Vietnam's postponed Formula 1 auto race said on Friday that the event had now been canceled due to the coronavirus pandemic, striking a blow to local backer Vingroup and the host city of Hanoi.

"This is a hard decision, but the only solution for the safety and efficiency of the round under the current conditions," Le Ngoc Chi, chief executive of Vietnam Grand Prix, said in a statement.

The first Vietnam Grand Prix was initially scheduled for April 3 to April 5, and was supposed to be a forum for the country's largest conglomerate Vingroup to showcase its passenger cars, which were launched in June 2016 by its unit VinFast.

"The F1 event in Hanoi is not only important for the sports segment but also for culture, society, and the development of Vietnam," the country's Prime Minister Nguyen Xuan Phuc said in November 2018, when FIA, the international body for the top auto racing championship, announced the race would go to Vietnam. The Hanoi government promised the necessary support to ensure the success of the event.

Earlier this month, the planned F1 circuit in Hanoi was cleared, prompting speculation that the event would be canceled after its initial postponement from March 2020. 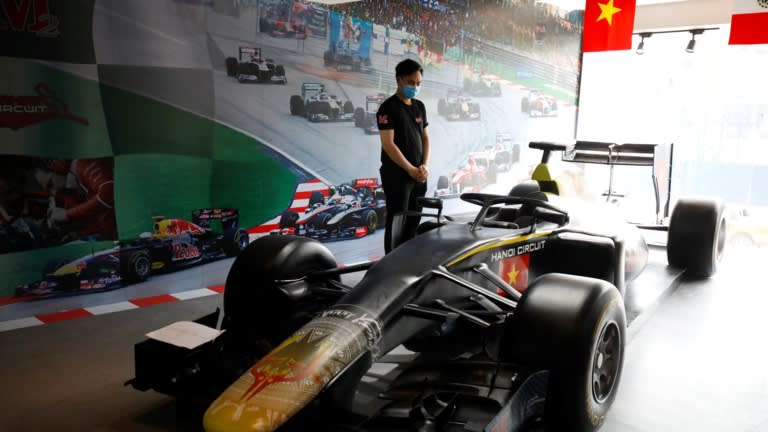 A model of a Formula One racing car at an F1 souvenir shop in Hanoi, Vietnam. The country's first F1 race, which was postponed from March, has now been canceled.   © Reuters

Vietnam's economic growth is expected to slow to 2.5% to 3.0% this year, from 7.02% in 2019, as a result of COVID-19. Auto manufacturing, led by Vingroup, had been expected to support the export-driven economy, with hopes that Hanoi would become a manufacturing hub.

But the cancelation will be another blow to Vingroup's car business this year. The group had been set to showcase its fleet at a series of activities related to meetings of the Association of Southeast Asian Nations, taking advantage of Hanoi's chairmanship of the grouping this year. It was also set to provide transport for delegates to attend the meetings, but most of the events have taken place online.

"2020 is not a good year for VinFast's brand promotion due to the coronavirus, as F1 has had to be canceled and all ASEAN meetings have been held online," a senior Vingroup executive said this week.

Still, domestic sales of auto unit VinFast appear to be holding up, reaching 3,626 units in September, an increase of 142% from August.

Vingroup had hoped that F1's arrival would represent a convergence of new technologies, including operating systems, monitoring and sensors, in the country's automotive industry, giving it an important boost.

Tran Dinh Thien, a member of the Vietnamese prime minister's Economic Advisory Group, said that the cancelation decision was wise.

It is not certain whether the event will be held next year amid ongoing uncertainty over the pandemic. Future events are being discussed, but all will be dependent on the pandemic situation, according to a person familiar with the matter.

Thien suggested that Hanoi should postpone the F1 race for seven to 10 years, in order to focus resources on other priorities.

The pandemic has changed many habits and behaviors across the globe, including entertainment. F1 racing could be delivered in a different form in the future, Thien said.