What Tesla's Berlin Gigafactory means for its future in China

U.S. EV giant's Shanghai plant is under pressure as rivals catch up The official opening in Berlin hit the same beats as the opening of the Shanghai Gigafactory in 2020: Musk delivered the first locally made vehicle, in this case a Model Y SUV, and danced the same happy dance as he did two years ago.

"Tesla will make sure that this is a gemstone for the area, for Germany, for Europe and for the world," Musk told attendees, mostly Tesla car owners who were there to pick up the first batch of vehicles made in the Berlin Gigafactory.

Musk's optimism aside, the Berlin plant needs to ramp up quickly to help Tesla capture massive -- but possibly fleeting -- demand from China, where the U.S. company is unable to keep up with orders.

China has become Tesla's key market since the Shanghai Gigafactory opened. Company revenue in the country has doubled for two consecutive years, hitting $13.8 billion in 2021, according to filings.

China has also become the backbone of Tesla's manufacturing for global customers amid overall supply chain constraints. Due to pandemic lockdowns, a global chip crunch and labor shortages, Tesla's Shanghai Gigafactory has ended up being tasked with manufacturing more than half of all Tesla vehicles in 2021.

But bearing the brunt of Tesla's manufacturing needs has come at a cost. More than half the Tesla vehicles produced in China in the past two months were for export, data from the China Passenger Car Association (CPCA) shows, forcing Chinese Tesla buyers into long wait-times for delivery. It is a less-than-ideal situation for the EV maker, as both local and foreign players are quickly gaining ground in the growing Chinese market. 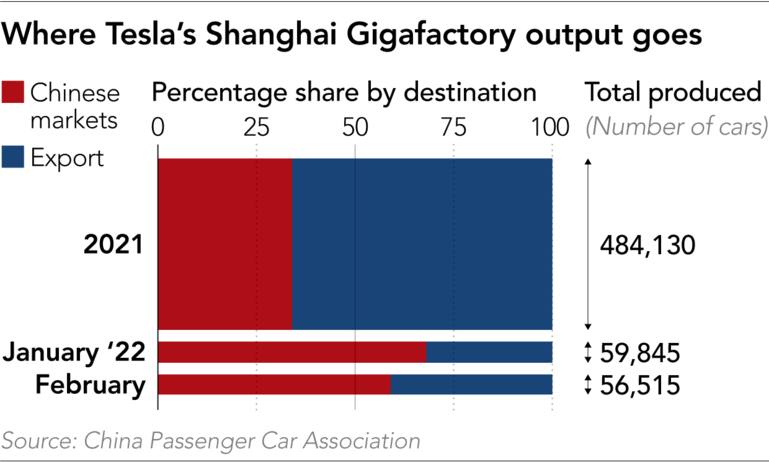 "Demand [for Tesla] is outstripping supply by about 20% in China, and I don't believe demand starts to balance out with supply until early 2023 for Tesla," said Dan Ives, managing director at Wedbush Securities.

The latest hiccup came this week when Tesla was forced to suspend production at the Shanghai Gigafactory for four days due to a spike in COVID-19 cases that led to a lockdown of the city.

The Berlin Gigafactory coming online could give Tesla Shanghai some much-needed breathing room to meet China's growing appetite for EVs.

"A large part of Tesla's sales were reflected in Europe last year as a result of its global marketing strategy, so we will see more pent-up demand unleashed in China this year," said Zhang Junyi, a partner at U.S.-based consultancy Oliver Wyman responsible for the company's automotive and private equity business.

Tesla's German plant is approved for producing up to 500,000 vehicles annually, according to the government. A fifth Gigafactory, this one in the U.S. state of Texas, is set to open in April. Ives projects this would give Tesla a total production capacity of 2 million vehicles in 2022.

However, the Berlin Gigafactory might not be able to increase production as quickly as Shanghai, which still holds the benchmark for quickest ramp-up and highest margin among Tesla manufacturing sites.

The company faced several delays in opening its German plant, which was originally scheduled to come online in July last year. Musk has also expressed concerns about being able to hire enough workers for the Berlin Gigafactory, according to a Reuters report.

Shanghai, by contrast, has been a model of efficiency. Tesla's Gigafactory in Shanghai, pictured, has been the backbone of the automaker's production, exceeding the output of its hub in the U.S. within two years of opening.   © AP

"I'd like to just give a special hand to the Tesla China team. It's the best quality, lowest cost and also low drama," Musk said at Tesla's annual shareholders meeting in October where he announced Shanghai had exceeded Fremont -- the company's former headquarters and production hub -- in production volume within two years.

But the local policies that helped Tesla scale up quickly while keeping costs low in China will not last forever. Shanghai's initial 15% corporate income tax rate for Tesla could go up to 25% after 2023, which will weigh on margins.

Meanwhile, as Beijing readjusts subsidies for new energy vehicles and a growing number of local and international rivals go all-in on electrics, Tesla may find it harder to continue dominating the Chinese market.

China's Finance Ministry announced in December that it will cut subsidies on new energy vehicles -- electric, plug-in hybrid and fuel cell models -- by 30% in 2022, with all subsidies ending on Dec. 31, 2022.

Since that announcement, Tesla has hiked prices on several models in China.

According to Zhang at Oliver Wyman, Beijing is unlikely to change its mind about cutting the subsidies for new energy cars, and other incentives will also likely disappear as EV sales rise. Programs offering free license plates for electric vehicles, for example, are being phased out in 2023. Procedures differ from province to province, but Beijing, for example, has a lottery system that can leave drivers waiting up to three years and paying more than 100,000 yuan for a plate.

"After the industrialization of electric vehicles, which is not unique to China, but has also happened in other countries, there will be no subsidies," Zhang said. 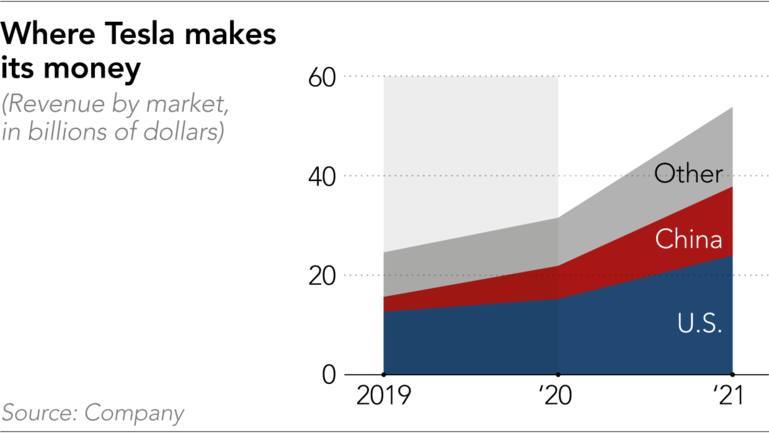 Industry experts said the Dec. 31 deadline for new energy vehicle subsidies will spur sales as consumers rush to take advantage of the incentive.

But for the long term "it is too early to tell how EV carmakers and consumers will react if the subsidies are cut by the end of the year," said Chang Shu, a partner of advanced manufacturing and mobility at consulting company EY-Parthenon. "The market will see some adjustments."

At the same time, legacy carmakers with a strong presence in China such as Honda, Toyota and Hyundai have stepped up their pivot to electric. Toyota has committed 8 trillion yen ($70 billion) to electrify its lineup by 2030, and Honda has teamed up with Sony to sell EVs by 2025. South Korea's Hyundai said it planned to invest about 19.4 trillion won ($16.1 billion) toward EV-related businesses.

"The time window still exists for Japanese and South Korean players," said Chang of EY-Parthenon. "They still have advantages, such as reliable products, good brand image and reputation, and they are catching up on advanced driver-assistance systems and digitalization."

For now, there might be enough growth to go around. The CPCA projected total new energy car sales in China will jump to 5.5 million units in 2022, up from around 3 million units last year.

"Giga Shanghai and China will continue to be the hearts and lungs of the bull story of Tesla for the next three to five years," said Ives at Wedbush.