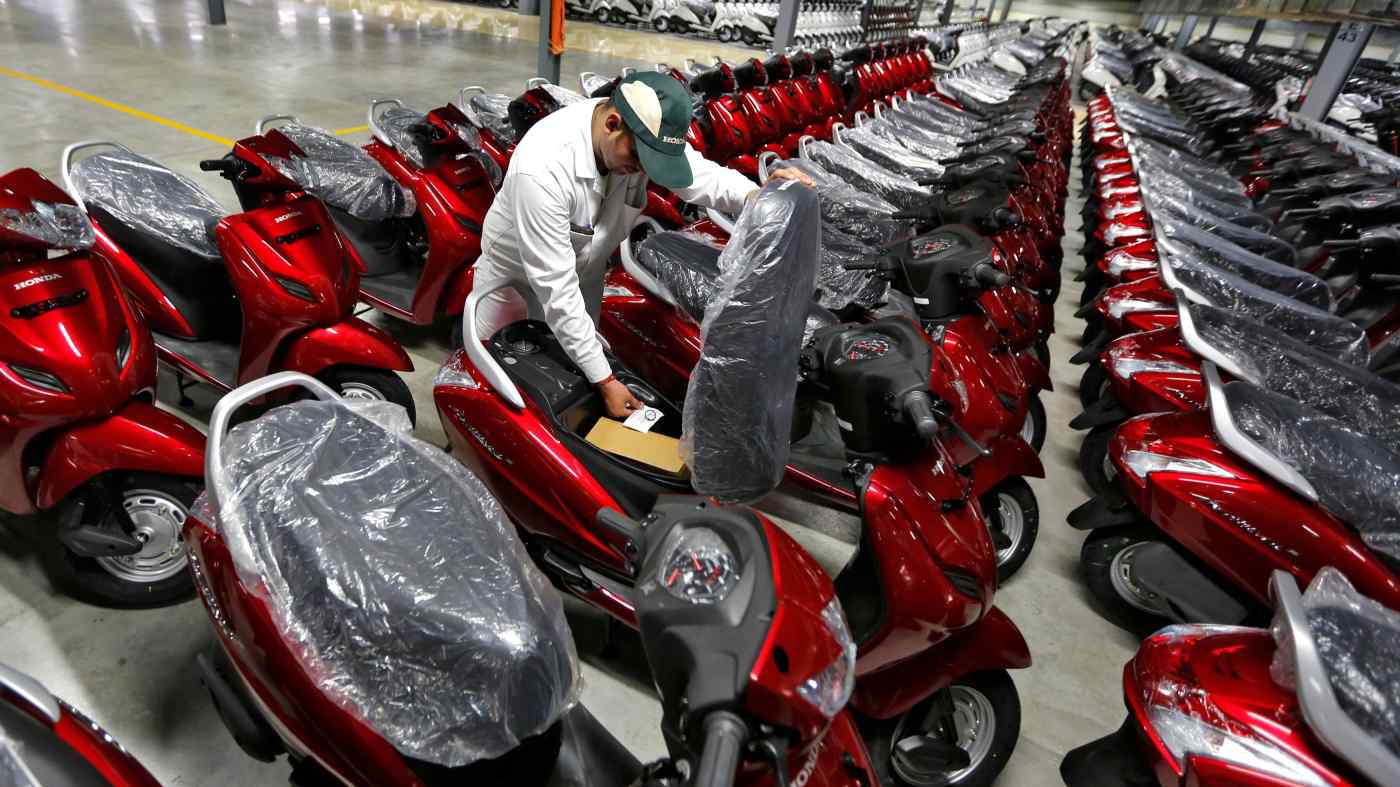 A Honda factory in Gujarat, India. The coronavirus has dealt a blow to motorcycle sales in the country.   © Reuters
TOMOYOSHI OSHIKIRI and RYOSUKE HANADA, Nikkei staff writersAugust 6, 2020 01:09 JST | Japan
CopyCopied

Honda logged its first-ever net loss for the April-June quarter of 80.8 billion yen, according to earnings results announced Wednesday. The vehicle maker expects revenue for the full year to fall 14% to 12.8 trillion yen. Annual dividends will be reduced 60% to 44 yen a share, the first cut in 11 years.

Though four-wheelers make up the majority of the company's sales, the motorcycle business -- which also includes products such as all-terrain vehicles -- made an operating profit of 285.6 billion yen last fiscal year, nearly twice as much as the auto business. The segment's operating profit margin came to 13.9%, compared with 1.5% for automobiles.

Honda holds the world's largest market share in motorcycles, allowing the company to share the same core parts across a large number of products. It has topped rivals on profit margin, with Yamaha Motor at 4% and Suzuki Motor just about breaking even last fiscal year.

But the coronavirus pandemic dealt a heavy blow to markets across the world, including India, which buys more motorcycles than any other country.

"Lower-priced motorcycles, one area Honda has focused on, have been the most affected by the slow economic recovery in India and Southeast Asia," said Hiroto Suzuki, a partner at consultancy Arthur D. Little Japan.

Honda forecasts a 23% decrease in sales volume for its motorcycle business this fiscal year to about 14.8 million units.

Rivals in India and China are also rising fast as well, potentially threatening Honda's dominance down the line. India's Bajaj Auto has partnered with U.K.-based Triumph and Chennai-based TVS Motor with BMW in hopes of bringing cheap but well-branded products to the global market.

Mounting setbacks in motorcycles are placing greater pressure on Honda to rebuild its automobile business. The company is making inroads in emerging economies to make up for struggles in the U.S., but increased costs have squeezed the business, bringing the segment's profit margin to less than a quarter of the peak.

Honda logged a 195.8 billion yen operating loss in its automobile business in the April-June quarter, compared with a 120.3 billion yen profit a year earlier. Automobile unit sales are projected to dip 6% to 4.5 million this fiscal year.

To help rebuild the automobile business, Honda absorbed most of the automotive operations at unit Honda R&D in April. It aims to cut production costs by 10% and development costs by 30% by 2025, and to boost the group operating margin to 7% or 8%. But there are concerns that the coronavirus could delay such efforts.

Investment in next-generation vehicles, such as autonomous and electric cars, will also be critical. Honda is expected to spend a record 860 billion yen on research and development this fiscal year, though some market watchers think the company needs to cut costs further.