A Toyota electric vehicle gets a charge in Tokyo   © Reuters
Business

MANILA -- When Ayala Corp. in April announced it would be producing KTM motorcycles at a subsidiary's factory and export the bulk of them to China, the conglomerate's chairman and CEO hinted that the 182-year-old company had much bigger dreams.

"This partnership [with the Austrian motorcycle maker] is the first of many investments as we ramp up our manufacturing portfolio," said Jaime Augusto Zobel de Ayala, himself a motorcycle enthusiast. 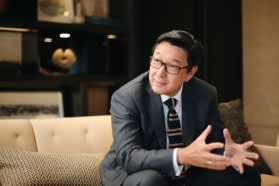 Arthur Tan discusses his company's plans in an interview with the Nikkei Asian Review.

The group's strategy is now taking shape. On Aug. 11, Ayala took its car dealership unit -- Ayala Automotive Holdings, which owns shares in the Philippine companies that distribute vehicles from Honda Motor, Isuzu Motors and Volkswagen -- and put it into a new subsidiary, AC Industrial Technology Holdings.

As the name suggests, AC Industrials will be about more than sales. It is meant to spearhead the development of automotive and manufacturing divisions, a stock exchange filing says. It is also meant to house existing and future assets in these spheres as Ayala executes an ambitious long-term strategy, the filing continues. Integrated Micro-Electronics, which owns the factory where the motorcycles will be made, will play a big role in these ambitions. Its chief executive, Arthur Tan, who will also head AC Industrials, earlier this month, said one of the reorganization's goals is to manufacture "a PC with four wheels."

In an interview with the Nikkei Asian Review this past Tuesday, Tan elaborated, to an extent. Ayala, he said, is in talks with "more than three" global car manufacturers and is prepared to chip in up to $100 million in a venture that in the next three years will make the Philippines a regional hub for next-generation cars, including autonomous vehicles.

The country's oldest conglomerate -- Ayala has its hands in banking, real estate, telecommunications, water distribution -- has been making inroads into other industries and markets with an eye to doubling its profits to 50 billion pesos ($1.08 billion) in the next five years. By 2020, it expects new businesses to be contributing 20% of group's equity earnings, up from 10% in 2015. It also sees 10% of its equity earnings coming from abroad, up from 4% last year.

In 2011, Ayala began going outside its core strengths by investing in power generation. It is now on track to meet its capacity goal of 1 gigawatt by the end of this year.

It has fiercely competed in the government's Public-Private Partnership program against other big conglomerates, like SM Investments and San Miguel. Ayala has bagged expressway, railway, and automated ticketing contracts from the PPP program, and added education and healthcare to its portfolio.

Investors have welcomed Ayala's diversification. The group's share price closed Friday at 894.5 pesos -- nearly triple what it was in January 3, 2011.

In contrast, the shares of Integrated Micro-Electronics, or IMI, established in 1980 as a joint venture with Resins, a Philippine-based manufacturer, have been trading erratically. Over the same period, the stock's price has fallen by a fifth. It closed Friday at 6.5 pesos. 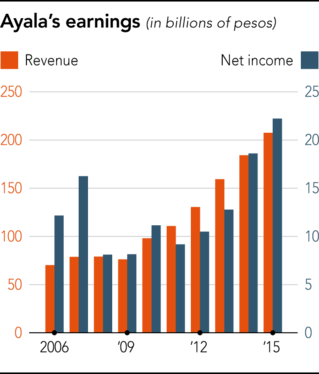 "Ayala's core operations are anchored in the booming domestic economy, while IMI [is more integrated with the] global market, where growth is lackluster," said Lexter Azurin, head of research at Unicapital Securities.

IMI's shares have shot up 14.4% since the AC Industrials announcement on Aug. 11; investors see IMI as having a key role in Ayala's manufacturing thrust.

In April, Zobel indicated that it was high-time for the company to capitalize on IMI, which among all Ayala's listed subsidiaries contributes the least to group earnings.

"Over the years, we have built a long track record of excellence in manufacturing and engineering," Zobel said. "We believe that manufacturing should be a critical component for the country's growth moving forward, providing thousands of jobs, creating numerous ancillary business opportunities ..." 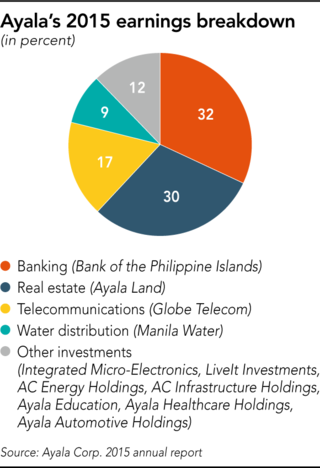 Said Tan, "We see that the core of a country to move from developing to developed has to pass through an industrial evolution, and a part of the industrialization means manufacturing."

In other words, Ayala aspires to trigger the industrialization of the Philippines by developing next-generation cars.

Ayala's interest in making cars was piqued in 2013, when it became a Volkswagen distributor. Both companies talked about the prospects of making the Philippines the German automotive giant's Southeast Asian hub.

But things have changed since then. Last September, news broke that Volkswagen had been using special software to circumvent pollution controls on its diesel vehicles. In May, Philippine voters elected a new president.

These two events seem to have conspired against any Ayala-VW carmaking partnership.

Ayala, however, is now showing off some nimbleness -- or perhaps swagger -- with its idea to use its existing assets to become a player in next-generation automobiles.

"How we got involved with [autonomous cars] is because we are actually focused on one of the key elements necessary in having autonomously driving cars ... the camera system," Tan said. "The missing ingredient here is trying to find the right partner who believes that the Philippines is a viable option [and] who looks at the Philippines as part of [the greater] ASEAN market."

Tan said talks with Volkswagen have not ended but the company has also engaged other potential partners.

He said Ayala can handle the venture's core manufacturing operations via IMI, which ranks sixth by revenues among the world's top provider of electronic manufacturing services to automotive industry.

IMI is already taking steps toward its parent company's goal. On Aug. 18, it acquired a 76% stake in a German display solutions company VIA optronics for 47.4 million euros.

Tan said Ayala's existing assets are also "key elements in making a successful venture." Two of those "assets" are Ayala Land, the Philippines' largest property developer by revenues, which could help an autonomous car division get set up in an industrial park, and AC Energy, which would supply power.

Still, merely gaining a foothold in this already competitive technological frontier would be a huge challenge for Ayala. The corporation would be going up against the likes of Google, Uber and China's Baidu.

Ayala would also have to acquire the capabilities to create the advanced software that is crucial to driverless cars. As for lower hurdles, according to Goldman Sachs, electric vehicles require only a third of the hardware that conventional cars do.

Tan is determined to get into the game. "From our perspective," he said, "it becomes a level playing field. Everybody now has an opportunity to get involved in being able to put up infrastructure and [gain the] capability of building next-generation vehicles."

He believes the Philippines, with all its manpower, has the potential to become an ASEAN hub for self-driving cars.

According to Goldman Sachs, 25% of the 120 million cars sold by 2025 will have electric engines, up from 5% today. The trend is being driven by a global desire to reduce greenhouse gases and other pollutants.

The Philippines' new government could also be a confidence booster for Ayala.

Tan is pitching an incentive program based on innovation rather than on production volume, and economic managers he has talked to appear to be "open minded" about his proposal.

Last year, the Philippines announced $600 million worth of perks for up to three car makers that produce 200,000 units of any one model over a six-year period. Tan described the program, which has attracted Toyota and Mitsubishi, as "backward-looking rather than forward-looking."

"Hopefully," Tan said, "the government sets a policy and framework where [it] would ... look beyond the traditional business model that is here and create a program [that] actually would encourage companies to bet on the next level of technology." Richard Laneda, an analyst at COL Financial, said Ayala has the capability and resources to create a car manufacturing business. "But we need to be cost competitive to compete with, for instance, China," he said. "And we are not yet there in terms of technological expertise."

The country is also not alone in trying to reach the starting line for high-tech cars. In Thailand, an electric vehicle lobby was established last year, suggesting Southeast Asia's biggest car producer is not content sticking with yesterday's technology.

Elsewhere in Asia, Singapore is already road-testing autonomous cars. China wants to put 5 million "new energy" vehicles on its roads by 2020. And India is evaluating ambitions to make all of its cars electric by 2030.

The Philippines has a lot of red flags hanging over it. Investors are concerned about poor infrastructure, the high cost of power and the consistency of government policymaking. These are among the issues being raised by the parties Ayala is talking with.

Tan recognizes the challenges. He knows how much Ayala has riding on its venture with Austria's KTM. Success would go a long way in erasing potential investors' doubts, Tan said.

Next year, the venture plans to begin producing an annual 20,000 motorbikes, 70% of which are to be exported to China, and later on to Southeast Asian countries.

If the KTM venture becomes successful, it could serve as a sales pitch in Ayala's next talks with a potential partner. "This puts to bed all issues that it can't be done [in the Philippines]," Tan said.