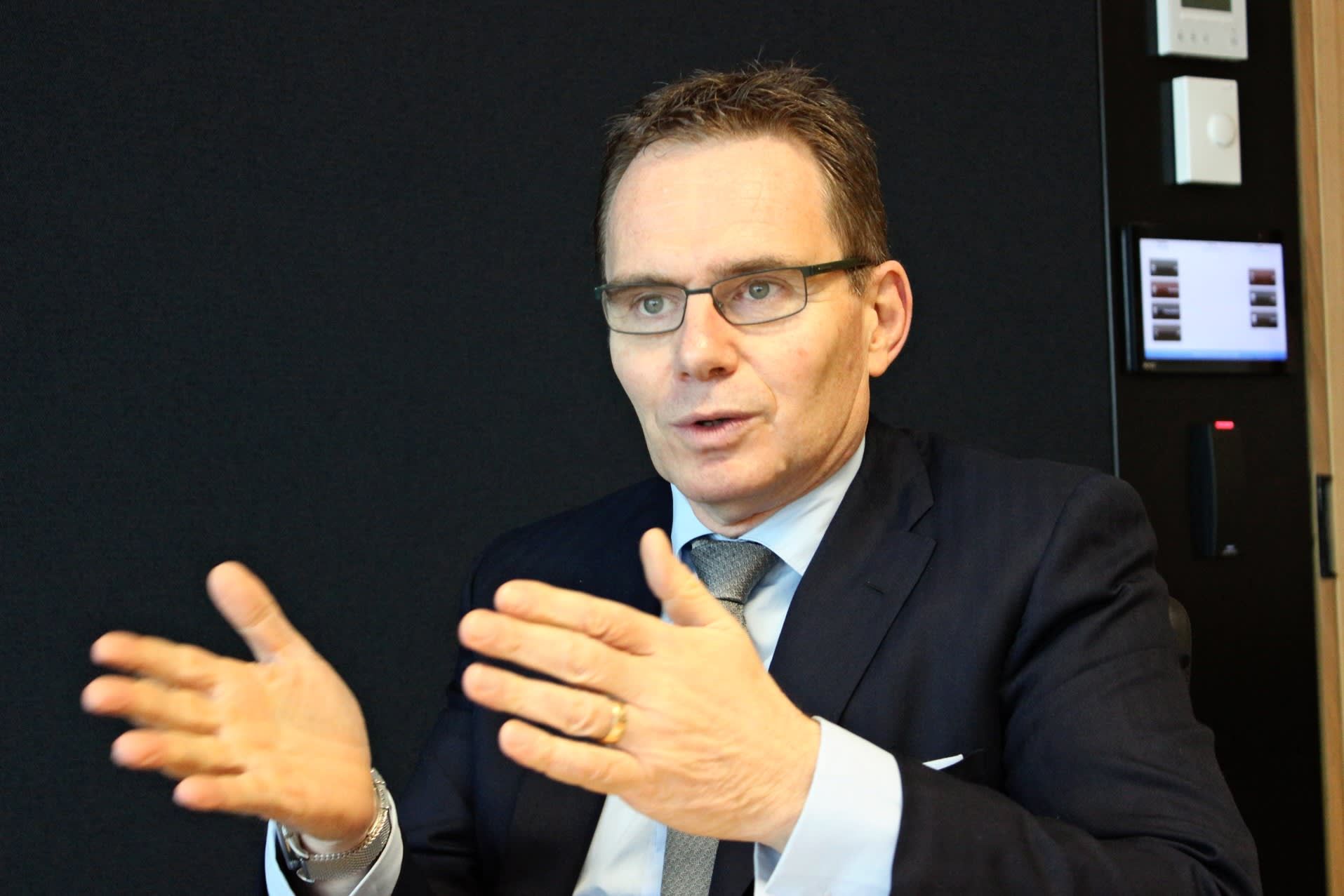 SYDNEY -- BHP Billiton -- the big mining, metals and petroleum multinational based in Melbourne, Australia -- will invest more in the energy sector, CEO Andrew Mackenzie told The Nikkei on July 4. The coming shift is a reaction to slowing demand for iron ore. Mackenzie also spoke on the end of the so-called "supercycle" -- in which China's voracious appetite for raw materials sapped supplies and raised prices around the world -- as well as a number of other topics.

Q: What are your thoughts about the end of the supercycle?

A: It was a somewhat strange phenomenon, and it was one that came about because of the incredible pace of Chinese growth, that nobody predicted. The major resource suppliers of the world were caught short. They simply had not invested enough to meet the increased demand with their supply. As a result, there was a big increase in price and a big increase in investment, so that those companies could catch up.

The reality is that most of the supply has now caught up with that growth in demand, and though demand continues to grow, it is growing at a more gradual rate, but still off a much larger base. During that time, a lot of the capital was invested relatively inefficiently, and many companies did not have time to really optimize the performance of a lot of that capital.

Now we have a situation where demand continues to grow at a slower pace, and we have the opportunity to add substantially more production to meet that demand, simply by better running what we invested (in) during the supercycle.

If I were to make an analogy with Japan, I would say that we in the mining industry have to apply the principles of lean manufacturing, or kaizen, that were made famous by Toyota Motor. What we hope we will do at BHP Billiton is turn mining into more of an advanced manufacturing industry. What that will mean is that prices will be more stable, they will be more sustainable, for a period, and we are unlikely to see a repeat of some of the things of the supercycle.

The other reason we are unlikely to see the repeat of that is that I do not see anything analogous to the very rapid industrialization of China over the last 10 years happening in the next few decades. I can not see any country industrializing and urbanizing at the pace and scale that China did.

Q: How do you assess the dynamics of the global economy at the moment?

A: Clearly there has been fallout and an adjustment to the financial crisis of 2008-2009. At the same time, we have a China that is trying to transition from being mainly about investment and infrastructure moving more toward a consumer-based economy. And because of the pace at which they have expanded, they have a number of quite tough problems to deal with.

Whilst I am not predicting a return to the supercycle, I do see from the perspective of BHP Billiton a strong and steady growth in demand for our products in a manner that I think will encourage us all to invest, and encourage us to improve the way in which we perform. But the pace of investment will be significantly slow. We will be able to provide a lot of that growth through just driving productivity in all our operations; as I said, applying kaizen principles to mining.

Q: Where do you see pricing heading for iron ore and coal?

A: We do see, particularly in iron ore, that the potential for low-cost supply to meet demand for some time to come is likely to maintain a sustainable level of pricing and, if anything, to drive prices lower rather than higher -- even, potentially, from current levels. The market will come back into balance, and that might mean that prices will sit at current levels or rise somewhat from where we are.

Q: Are you going to increase iron ore production?

A: With the mines that we have currently got under development, and the port capacity we have and the real capacity we have, we can get to 270 million tons a year with relatively modest investment (from the current 220 million tons a year). We are edging closer to that, through making what we have got more productive and reducing the potential investment to get there. Beyond that, there are a lot of questions, and we really have nothing that we are actively considering right now.

Q: How does BHP Billiton understand the changing energy and resource needs of the major geographic areas?

A: We have been very explicit that we think the rate of growth in demand for iron ore and metallurgical coal is likely to slow. We will invest less because we can derive much of the supply we require from de-bottlenecking, and making what we have got more efficient.

On the other hand, we see (China's) move to greater consumption as likely to lead to a much bigger increase in demand for energy and energy products. I would expect going forward that we will shift our investment to a greater extent into the energy sector. The Chinese or Asian consumer may already have a nice apartment but will tend to use a lot more energy.

You asked about the makeup of energy. That is one of the more difficult things to be precise about; there are many opinions about where the energy of the future should come from. You have strong pressure to be greener, which most people associate with renewables. On the other hand, you have the reality that the lowest-cost energy currently available is probably from coal, followed by gas.

Renewables make far greater use of copper, which to some extent is an energy commodity because most copper is used for transmitting electricity. I think one thing that we feel quite confident about is copper, because we do think, in a world that wants to make its energy consumption more efficient, it will receive it more in the form of electricity -- and efficiency is definitely promoted by converting thermal energy to electrical energy as early as you can in the cycle. We will invest a lot in copper.

Q: What are your 'four pillars plus one' and simplification versus diversification strategies?

A: We happen to have our arms around some very large-scale ore bodies in iron ore, in coal, in copper, and -- if I can call them ore bodies -- in petroleum and natural gas. With the exception of petroleum, (these) could last us for a hundred-plus years.

And simplification versus diversification. How can this company, which has been around for a hundred-plus years, be around for another hundred years? We need to have the materials to work on, that play to the core skills, the core strengths of BHP Billiton -- of extracting things from the earth and managing the logistics to sell them to the four corners. We believe in being able to follow a shift over time, from investment in steelmaking to investment in energy to investment in food.

So when I talk about simplification, what we want to think about is the simplest kind of portfolio, (one) that is adequately diverse to allow us to move with the patterns of demand with time but (not) beyond that.

That is why we have chosen not to invest in the things that are outside the four pillars, and steadily, over time, we have been reducing our diversification in that range. We have already sold out of diamonds; we have sold out of standalone uranium, we like uranium that co-occurs with copper; we have reduced our exposure to some parts of (liquefied natural gas). We only want things in our portfolio that are world-class ore bodies. We have also exited titanium and mineral sands.

Q: What do you think about the possibilities the mineral potash presents as a fertilizer?

A: We see, perhaps, a more stabilizing global population. Our skills are extracting things from the earth, knowing the earth, and then running the logistics and trading of those commodities. Where could we apply those skills of geology, of petroleum engineering, of mining engineering, in the very long term? Maybe in the area of fertilizers. We (see) a richer population that wants to eat better but deforest less. Therefore (we will need to) increase the efficiency of arable land, to help urbanization. Our contribution to modern agriculture could be in the mining of fertilizers. And that is why we are looking, in the very long term, at the possibility of major investments in things like potash.

Q: Much has been made recently of head-count reductions. Will there be further reductions?

A: We do not have targets for reducing head-count. I have targets for productivity and efficiency. And we deliver productivity, very crudely, in two ways. We either make the existing workforce more productive and we produce more tons in some areas. The market for more tons is not there -- there is a very expensive bottleneck to overcome. That means we can not produce more tons, so as we become more productive, then we are able to do our work with less people.

And that translates to a range of things, which I know ultimately may lead to, in some cases, head-count reductions, but that is to some extent an outcome; that is not a target. And we certainly hope, through our endeavors, that we handle that in a way where everybody is treated with dignity.

Q: How do you see BHP Billiton's relationship with its steady Japanese customer base?

A: This is a very important relationship. Even though we talk about these transitions from steel-making to energy to, potentially, food and fertilizers, it does not mean that our supply of steel-making materials will (be) reduced. It will continue to grow; it will just continue to grow at a slower rate. And much of that growth will not require much capital investment. I imagine that for many decades to come, we will have a very strong relationship with Japan.