TOKYO -- China's Baidu announced Monday that it has bought out popIn, an online ad startup that began life at the University of Tokyo.

Baidu, the world's No. 2 search engine behind Google, hopes to make ads that are not skipped easily using original popIn technology. The startup's technology measures how long ads are viewed. It could help Baidu better compete against Google in the global online ad market. University of Tokyo Edge Capital, a venture capital company, and popIn Representative Director Cheng Tao sold all their shares in the startup to Baidu. The deal is estimated to have been worth around 1 billion yen ($7.91 million). PopIn, which will continue business under the Baidu umbrella, has not disclosed sales and profit figures.

At a press conference the same day, Baidu Japan President Charles Zhang said Baidu took over popIn because of its technology.

PopIn was established in 2008, when Cheng was a Chinese student of the graduate school of the University of Tokyo. The company's technology measures the estimated time it will take to read through an online ad and compares it with how long an Internet user stayed on the website.

Conventional technology can only figure out whether an ad was read or not.

PopIn's customers are operators of websites that place company ads. If they can make sophisticated ads, they have the potential to enhance the value of their websites.

PopIn says that its technology has been introduced by more than 200 news websites to verify the effectiveness of native ads -- corporate blurbs that look like news articles. The startup also offers a service that recommends other ads to interested readers.

U.S. research company BIA/Kelsey predicts that the global market for native ads will be worth 2.3 trillion yen in 2019, up roughly threefold from 2014.

Baidu will use popIn's technology on its Chinese website. Baidu controls more than 70% of the Chinese search market and has various affiliated websites for services such as video, map and travel.

It will also increase the number of ads for Japanese companies targeting Chinese travelers to Japan, including outlet mall operator Mitsui Fudosan, to attract customers.

But Baidu is not targeting the Japanese market alone. Zhang Yaqin, Baidu's president in charge of new business, said that the company will make profits around the world by combining popIn and Baidu technology.

Baidu is currently studying ways to effectively distribute ads to individuals based on behavior analysis by artificial intelligence. The company aims to accelerate the development of online ad technologies. 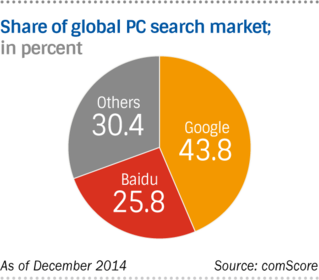 In May last year, the company established an artificial intelligence lab in Silicon Valley. It also decided to invest in major U.S. content recommendation company Taboola this year. While popIn specializes in native ads for smartphones, Taboola is strong in those for PCs.

PopIn's Cheng says that U.S. online ad technologies were dominant in the past but that he wants to spread Japanese and Asian technologies. Baidu's Zhang says the company's Japanese operations are responsible for working on new projects and making them successful.