Japanese toymaker Bandai has sold approximately 450 million units of nearly 2,000 different Gundam plastic models so far. The company's craftsman spirit and production prowess have contributed to the enduring popularity of these models, known as Gunpla, over the decades.

Although many toymakers have shifted their production bases overseas, Bandai bucks this trend and still makes these model kits entirely in Japan. 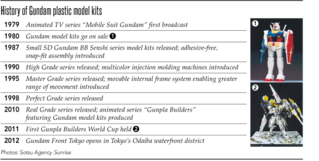 There were more than 1,500 entries, but Takaoku created his original mobile suit plastic model that had not been featured in any of the Gundam TV or film series. "I make Gunplas in any way I like. That can complement the story or help encourage my imagination. That's what attracts me," he said.

Katsumi Kawaguchi, an official of Bandai's hobby products department, has engaged in Gunpla production since the plastic model kits debuted more than three decades ago. "The more you make Gunpla, the stronger your passion becomes. There are as many works of Gunpla as there are Gunpla creators," said Kawaguchi. "The official [Gundam] story has been updated. Gunpla products are still a strong seller after 35 years."

Bandai operates its manufacturing base for plastic model kits, called Bandai Hobby Center, in Shizuoka City, Shizuoka Prefecture. Here, the company melts and molds resin to produce plastic model kits. Bandai's hobby products department has around 140 staffers, and about 90 of them work at this center.

In October, three new resin molding machines went online there. Painted in black and purple, the machines conjure up the image of Gundam's enemy mobile suit, named Dom. These machines apply 180 tons of pressure to clamp molds and produce 4,000 to 5,000 pieces of sprue -- a set of joint-molded plastic model parts -- a day, raising the center's production capacity by 20%.

The molding machines, custom-made by Toshiba Machine, are designed to inject four types of resin -- all different materials and colors -- into molds and produce multi-color sprue pieces. "Throughout the world, only Bandai can handle this machine," said Kenji Shida of Bandai's hobby products department.

Since joining Bandai in 1985, Shida has been focused on Gunpla production throughout his career. Indeed, he is accredited as one of only four "senior meisters" in Bandai's 35-year Gunpla history.

The company uses five different kinds of resin, such as polystyrene and acrylonitrile butadiene styrene. When molds for new plastic model products are made, Shida and other engineers fine-tune the molding machine's settings according to the shape of such molds and the types of resin used.

To melt granular-like resin, they finely adjust the temperature between 190 C and 240 C and decide which resin to pour into the machine, in what order and at what timing. Currently, it takes about 20 seconds per sprue from the time when they pour resin to when that resin sets. Bandai aims to cut this time to 15 seconds, said Shida. In this process, their intuitive sense based on many years of experience counts most. Computers are incapable of analyzing the delicate movements and qualitative changes that occur in the four types of resin used, said Shida. What's more, it is important to hash things out with resin makers, such as Asahi Kasei.

Moreover, Bandai Hobby Center is conveniently located in a cluster of relevant companies in Shizuoka. This allows Bandai to produce everything -- from packaging to instruction manuals -- domestically. Its exports of Gunpla model kits account for over 30% of the total shipment thanks to rising popularity in other Asian countries.

Molding with the times

In 1990, the company introduced multi-component injection molding machines that could combine different types of resin to make a single plastic part or could make movable parts in the molding process by using different materials.

Multi-color plastic parts are connected to a piece of the Gunpla's sprue, and all one has to do is to put all these parts together to make a Gundam mobile suit model. This so-called "colorful plastic sprue" has become synonymous with Gunpla.

Currently, Bandai operates a total of 17 multi-color injection molding machines around the clock, and its hobby center is equipped to produce as many as 24 million units a year, including non-Gunpla model kits.

Over the past 35 years, Bandai has released approximately 2,000 different types of Gunpla models. The company has all of the molds used so far in storage at the hobby center and nearby warehouses. As such, Bandai can bring back and use these old molds to re-produce older Gunpla models if need be.

Bandai has already depreciated the bulk of its Gunpla plastic molds, meaning that these molds are actually its hidden assets. Many Gunpla fans are fond of older mobile suit models. The company can enjoy a high profit margin, although not as high as that of video games, if it brings back those old plastic model kits. This is because such older models come with much less of a depreciation burden.