BANGKOK -- News of the resignation of Thai billionaire Prasert Prasarttong-osoth from the position of CEO of Bangkok Dusit Medical Services and vice chairman of Bangkok Airways over share manipulation charges hit the stocks of both companies on Monday.

Bangkok Airways shares tumbled 7.14% to 11.70 baht each while Bangkok Dusit Medical Services stock fell 8.47% to 21.60 baht apiece. Both stocks sharply underperformed the Thai benchmark index which made a marginal gain of 0.29% on Monday.

Prasert, his daughter Poramaporn and another executive Narumon Chainaknan were fined a total of 499.45 million baht ($15.8 million) by the Securities and Exchange Commission of Thailand on Friday for manipulating the share price of Bangkok Air. The SEC said the penalty showed that the offenders were "untrustworthy" and must leave their board posts.

All three resigned from their positions on Monday "in view of good corporate governance." Poramaporn was chief operating office at Bangkok Dusit. However, they also made clear that they would appeal the charges to prove their innocence.

The SEC and the Stock Exchange of Thailand said the company officials traded and matched Bangkok Air shares from Nov. 13, 2015 to Jan. 12, 2016, causing the stock to climb 22.5% over the period. 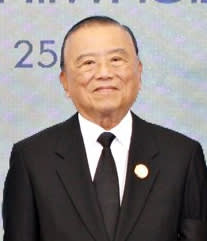 Prasert’s son and the director of the airline, Puttipong, was not implicated in the case and remains in position. However, an analyst at Country Group Securities said: "This [scandal] obviously will damage the corporate governance and image of the airline. We have to monitor carefully how asset management companies react to the company. If they decide to sell their holdings, the fall [in the stock] may accelerate."

The SEC tightened regulations in 2016 and 2017, so that it can impose more severe penalties on unfair trade practices. In 2015, the chairman and two vice chairman of Thailand’s largest convenience store operator CP All and a vice chairman of telecommunication company True Corp. were only fined a total of 34 million baht for insider trading. They kept their posts as the SEC had no power to remove them then.

"This case reiterates the significance of corporate governance and how corporate directors need to embrace fiduciary duties and adhere to top-notch  standard of conducts," said Kulvech Janvatanavit, president of the Thai Institute of Directors, a business association. "Failure to do so could result in severe penalties on individual level and could also erode confidence of stakeholders ... investors around the globe are also pinning higher expectations on directors of listed companies, not just to deliver favorable return but also to comply with highest moral standards."