JAKARTA -- The president of Bank Mandiri said on Tuesday that he expected the economy to grow at a faster pace next year after Indonesia's largest state-owned bank reported a 25% year-on-year growth in net profit for the January-September period. President Kartika Wirjoatmodjo said loan growth, which stood at 9.8% year-on-year for the nine-month period, is projected to accelerate to 10-13% in 2018, thanks to a stronger economy.

"[Non-performing loans] have been very under control for past two quarters," he said at a press conference on Tuesday. Gross NPL ratio fell to 3.75% from 3.81% a year ago. "We are quite confident that the economic cycle that we've experienced has almost reached its peak."

Mandiri is recovering from sluggish economic growth in recent years that has resulted in a jump in bad loans among small and mid-sized companies. The bank has responded by lending more to blue-chip companies, which is less profitable but offers more financial stability.

As a result, the bank's net interest margin -- the difference between lending and borrowing rates -- declined to 5.86% from 6.54% a year ago. This was still slightly higher than the bank's guidance, thanks to rapid growth in its consumer and microloan segment, which has higher margins. Loan growth was also driven by faster disbursement of loans toward infrastructure projects. 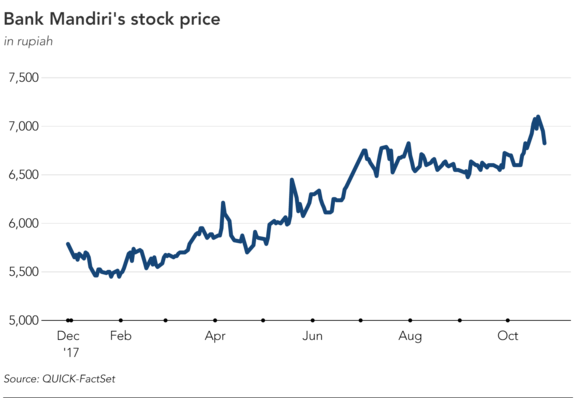 Wirjoatmodjo said while retailers were still struggling, consumer appetite for big items like cars and houses remained intact. "I think [the struggle in] retail is because the competition is tight," he said. "There are so many [businesses] that open large outlets, wholesale, minimarts. But demand for big items is not declining sharply. I think consumer demand next year will be better."

Wirjoatmodjo added that the impact of the central bank's two interest rate cuts since September on earnings will be "limited" as he expected economic conditions to improve next year.

Mandiri's increase in net profit was partly offset by a 675 billion rupiah tax provision that the bank booked in the third quarter due to several ongoing disputes. Wirjoatmodjo said it booked the provision after deciding that it might be difficult to win the cases because the government was becoming more aggressive in increasing tax revenue.