BEIJING -- China should let some high-yield investment products default, a former president of state-owned Bank of China told reporters Monday, an unprecedented comment for a senior figure in Chinese finance.

The extent of this shadow banking sector is estimated at about 20 trillion yuan ($3.26 trillion), Li Lihui said in an interview. 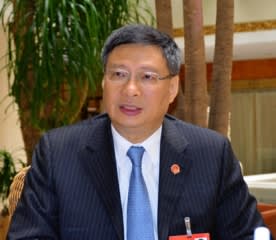 "Some of the products have problems," acknowledged Li, a member of the Financial and Economic Affairs Committee of the National People's Congress.

Asked about Jiling Province Trust's Songhua River No. 77, a trust product said to have failed to repay investors, Li said it should be allowed to default if the investment proves difficult to restructure.

But he said risk management is possible for wealth management products on the whole, playing down anxiety over the potential for a widespread meltdown.

Li's remarks, which come as the National People's Congress meets for its annual session, appear to be an attempt by China's government to show that it is dealing appropriately with the growth of shadow banking.

Li stepped down in January as head of the Bank of China, one of the country's four big state-owned lenders.