TOKYO -- Private-equity funds, once known for their ruthless tactics to force restructuring, appear to have discovered that collaboration and persuasion often work better in advancing corporate reforms. Panasonic's partnership with Kohlberg Kravis Roberts is a case in point. Last September, the Japanese electronics firm agreed to sell its health care operations to the U.S. investment firm for roughly 150 billion yen ($1.51 billion). Since then, they have been working together to strengthen the business.

"KKR has the expertise to help companies expand globally from all aspects, including supplying information and personnel," said Hirofumi Hirano, chief executive officer of KKR Japan.

Turnaround funds are known to target unlisted firms, aiming to reap profit when they go public. Having gone through a slump after the global financial turmoil in 2008, they are making a comeback. The money raised by funds worldwide fell almost 60% from 2008 to about $295 billion in 2010, but recovered to $467 billion in 2013 on the back of global monetary easing.

Their presence is expanding in Japan as well. The amount procured by domestic funds grew from about 91 billion yen in 2011 to around 174.4 billion yen last year, according to investment adviser Brightrust PE Japan. Recently, Unison Capital and Keystone Partners have set up funds of roughly 60 billion yen and 30 billion yen, respectively.

And the funds' collaborative approach to targeted firms has prompted more businesses to embrace their help.

Overseas investors have noticed the change in attitude among Japanese firms. New Horizon Capital CEO Yasushi Ando, said he was bombarded by questions about whether Japanese firms are no longer wary of the funds when he spoke at a private-equity forum held in Hong Kong in January.

Many small and midsize companies outside metropolitan areas looking to expand nationwide or globally partner with funds. Komeda, which operates some 550 coffee shops, mainly in greater Nagoya, received capital last year from MBK Partners. Seeing Komeda's potential to expand in the greater Tokyo and Osaka areas, MBK installed a former chief operating officer of McDonald's Co. (Japan) as president of Komeda to accelerate its nationwide march.

Wendel, one of the largest European funds, invested in Nippon Oil Pump, which controls 70% of the global market for trochoid pumps used to adjust temperatures in machine tools. President Masato Nakao says Wendel is attractive because of its overseas network. "We hope to expand in Asia and Europe, which would've been difficult on our own," he added.

"Midsize businesses with unique technologies and services that generate tens of billions of yen in annual sales can be promising investment targets," said Tamotsu Adachi, a managing director at the Carlyle Group's Japanese arm.

Survival of the fittest

Last month, Cerberus agreed to sell its shareholdings in Kokusai Kogyo to the Japanese company's founding family for more than 100 billion yen. Kokusai Kogyo was once a conglomerate owning hotels and golf courses, but its earnings went south after Japan's economic bubble collapsed, and the U.S. investment fund acquired it in 2004.

Another firm that Cerberus invests in, Seibu Holdings, is slated to relist on the stock market as early as April. Some speculate that the well-known vulture fund may be leaving Japan after it winds down its big investments here.

Carlyle, KKR and Bain are among the long-established foreign funds that have built track records in Japan. And domestic funds, including those connected with financial institutions and trading houses, have produced some good results by working closely with companies. As the Japanese stock market recovers and earnings rise, there are fewer undervalued firms for funds to snap up. This could lead to a winnowing out in this sector as some funds become unable to deliver returns that satisfy investors. To survive, the funds will have to distinguish themselves by touting their areas of strength.

Competition is also growing with public-private funds. In addition to the Innovation Network Corp. of Japan, which has been around for a while, initiatives launched recently to support the government's growth strategy include an agricultural fund and the Cool Japan Fund to promote Japanese culture. Said to have 5 trillion yen available, including government guarantees, they could potentially squeeze private-sector funds. 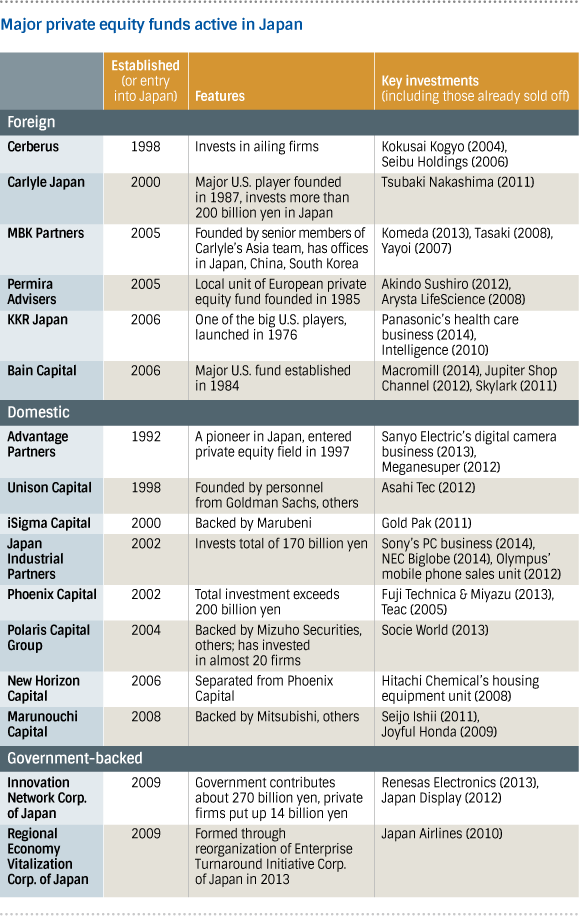