SINGAPORE -- Despite a slowdown in China, political turmoil in Thailand, and tough times in the Asian hospitality industry, Ho Kwon Ping's eyes gleam when he talks about new hotel locations.

"We have signed four very exciting deals recently in Cuba," the founder and executive chairman of Banyan Tree Holdings told the Nikkei Asian Review. For Ho, Cuba is a green field waiting to be cultivated, a storied land with a lush Caribbean backdrop that has just started to lure back U.S. tourists cut off in the 1960s after communist revolution. Early next year, Banyan Tree will open in Cayo Santa Maria there, an exotic hotel resort with untouched sandy beaches and diverse wildlife.

In September, Banyan Tree announced another new property in Turkey for spring 2017, its first move in the direction of Europe, the Mediterranean, and Africa. Banyan Tree was launched in 1994, and today has around 40 hotels and 60 spas in over 25 markets.

It is considered one of the major Asia-based hotel chains, competing with the Mandarin Oriental Hotel Group with 29 hotels and eight residences in 19 countries; Minor International, the Bangkok-based conglomerate that runs 150 hotels globally; Hong Kong's Shangri-La Hotels and Resorts with 90 hotels and resorts in Asia-Pacific; and Phuket-born Aman Resorts with around 30 resorts, hotels and private residences in 20 countries. Investors think Banyan Tree could do better. Its initial public offering price was 0.85 Singapore dollars ($0.60) in 2006, and shares peaked at S$2.9 in 2007 before the financial crisis. The price has never recovered, and remained flat below S$1 since March 2011. The slowdown in China's economy has not helped. At the end of 2015, 62% of hotel revenue came from China and Thailand.

Banyan Tree's net loss for the quarter ending in September was S$10.81 million, almost double the same period last year when it had higher property sales and hotel management fee income. Revenue was down 23% year on year to S$62.6 million after Chinese tourist numbers had been depressed since 2015 by the weak economy. Shares finished trading at S$0.37 on Nov. 11.

Ho, now 64, only became a hotelier "by accident" at 42. A Singaporean born in 1952 in Hong Kong to an upper class family, he was educated in Singapore, Taiwan, and attended Stanford University in California, where he took to the streets to protest the Vietnam War. After returning home, he was jailed in Singapore in 1977 for two months because of pro-communist articles he wrote for the Far Eastern Economic Review, a Hong Kong weekly magazine.

It was during those days of contemplation behind bars that he realized he was not a Nelson Mandela, he said in 2010 interview. Later, he would find a different way to express himself as a businessman. When his father, Ho Rih Hwa, suffered a stroke in 1981, he moved into the family business, the Wah Chang Group that was involved in clothing, consumer goods, and construction. Soon after, Ho found that contract manufacturing products such as shoes was anonymous and he began looking for new challenges.

His hotel business was born out of a passion to create his own brand -- something distinctive on which he could put his own stamp. "If you don't own a brand, somebody will always be cheaper than you," he said. "I never intended to be a hotelier."

Ho's new business incarnation came in 1994 where he and his wife, Claire Chiang, opened the first Banyan Tree resort in Phuket, Thailand with Ho's brother Ho Kwon Cjan as the architect. They bought a site of an abandoned polluted tin mine in Phuket in 1984 and painstakingly spent 10 years cleaning up the area before they were able to build their first Banyan tree resort. Initially, they developed properties there as hotels for a chain to manage. When they were unable to find an operator to manage a fourth hotel, they decided to run it by themselves under their own brand name.

The name was derived from Banyan Tree Bay, an island off Hong Kong where Ho and his wife had lived for three years. They had always enjoyed the sanctuary it offered, and felt others would seek this in their travels.

Ho sought out other appealing locations in China. In 2006, Banyan Tree established one of first international resorts in Lijiang in northwest Yunnan province. Although the old town of Lijiang is a UNESCO World Heritage Site with a 1,000-year history, other chains were more interested in developing coastal properties. Banyan Tree also developed another inland property at Ringha in Yunnan, helping it triple net profits year on year in 2007 to S$81.8 million.

The timing was good. The more affluent in China were making the domestic travel industry boom. Ho rode the trend, offering a more sophisticated product to travelers looking for more than group snaps and shopping. "When we travel, it's not just for shopping and swimming, but to experience different cultures and see beautiful landscapes," said Ho.

The positive momentum did not last long, faltering with the 2009 global financial crisis. The slowdown in more advanced economies encouraged new arrivals. Major chains like Marriott and Hilton began expanding their China footprints with leveraging from powerful loyalty programs. The number of five-star hotels more than doubled to over 800 between 2006 and 2015, when China's economy slowed significantly. Banyan Tree's flagship resorts saw occupancies drop in 2006 from 63% to 58%. Ho's aggressive bet in China backfired in the same year. Banyan Tree dove into the red due to higher provisions for doubtful debts, the majority of which came from unpaid management fees by cash-strapped hotel owners in China. The problems there were coupled with Russia's economic downturn, resulting in the loss of "very high-paying guests", according to Ho.

The lackluster performance forced Banyan Tree to announce it would cut around 160 of its 1,400 corporate staff in its Singapore, Bangkok, Phuket, and Shanghai offices. "This is not going to be a good year, and the environment might deteriorate even further," said Ho with rare solemnity ata news conference in February as he announced poor financial results and staff cuts.

"The oversupply pressure is still going on, and it's unfortunate," he told the Nikkei Asian Review. The outlook for luxury properties is not rosy with domestic real estate developers also jumping on the wagon as local authorities forge ahead with urban development plans that include building new luxury hotels.

Now, Ho has gone back to where he started, searching out exotic places that offer something unique, but this time it is in places like Cuba, Turkey, and Morocco. "It's just the adventurous spirit that we bring with us when we travel to see the vast beauty of the desert, or travel to Marrakech to see the Medina," he said with a wide grin. "It's an incredibly romantic way to see the world, and that is something we want to capture." Ho also sees potential in many parts of East Asia. "Japan is a very interesting area, and it is changing in terms of tourism. It is much more convenient now to move around there than before." Kyoto and Okinawa are two of the places he has been exploring. As Banyan Tree enters a new phase to survive the new competitive environment, Ho is redefining his target customers and going after young travelers looking for new destinations. He is offering less pricey hotels through a new brand, Dhawa, which was launched last year. Dhawa's three-star properties have price points of $80 to $170 per night. They target "young and hip travelers" in their 20s and 30s. The older, higher end Banyan Tree and Angsana brands cost roughly $150 to $400 per night. "We are bringingfive-star attitudes to running three-star hotels," said Ho. By 2019, he wants to build up the Dhawa brand to 1,256 rooms and double his four-star Angsana brand, launched in 2000, to over 4,600 rooms.

"We have been seeing what I've always called 'rainbow tourism' --  no more one color, one culture," Ho emphasized. 'There is no demand by travelers just for a hotel of their own culture."

"We want a more stable footing, and to succeed as a multi-branded hotel company in the international space in the longer term," said Ho. He wants Banyan Tree to mix "established places and new areas", but always promote the romance of travel.

Annie Wang, director of hotels at the Beijing office of Savills, a global real estate services provider, said that Banyan Tree must combine good timing with the right sites. "Securing loyal customers with their strong brand will be important," she said. Wang believes moving beyond five-star flagships fits with the trend toward "more family-orientated travelers who spend money more reasonably", especially among Chinese tourists. 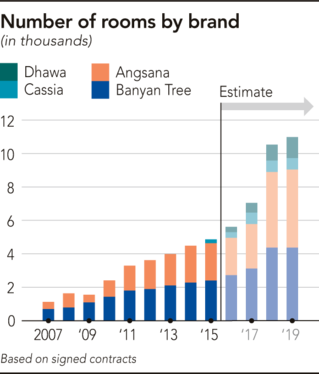 Something of a political firebrand in his youth, Ho remains idealistic and quite radical at heart. Ho was once described by his wife as "a capitalist in his pocket and a socialist in his heart".

Nowadays, as an established businessman, Ho actively participates in civil society in Singapore. He is founder and current Chairman of the Board of Trustees of Singapore Management University.

Ho remains a big influence among young Singaporean entrepreneurs as the father of a rare luxury brand originating in Southeast Asia. A speech he gave about Singapore's future shortly after the death of Lee Kuan Yew, the republic's founding father, attracted hundreds with overflow attendees watching him on screen outside the hall.

"In the next 50 years -- the Singapore after Mr. Lee Kuan Yew -- the line between leader and follower will start to blur. You and I are not cogs in a machine, or grains of sand, or drops in the ocean," he said. "You are the entire ocean in a drop." It was his call for young Singaporeans to adopt their own stances, to be brave, to speak up -- to take control of their own futures.

As the founder of Banyan Tree, Ho himself is now in the process of making a major shift in his business strategy that involves reviewing brands and property portfolios to take account of new competition in the industry.

It remains to be seen if Ho's changes will turn the tide before he retires. He has never spoken about the timing of his departure, but two of his three children are involved in family businesses. 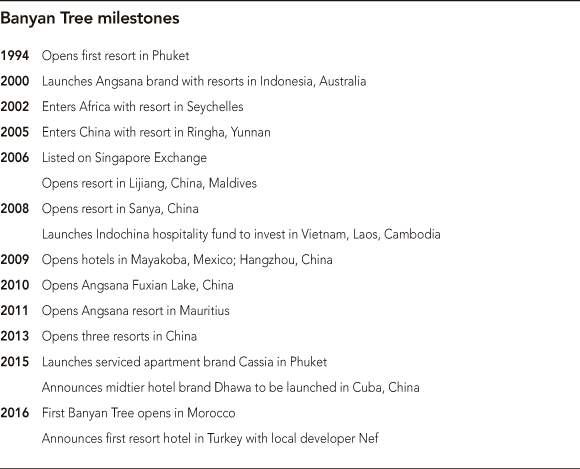