MUMBAI -- The muddle around India's favorite comfort food has yet to clear since the Maggi fiasco. But instant noodle makers, including Nestle India and rival ITC, have already begun to sweat it out for market share.

ITC, a leading Indian conglomerate that recently diversified into branded food products, has launched an advertising campaign that focuses on its production methods.

Nestle India, meanwhile, has been buoyed by a ruling last month by the Bombay High Court. The judge ruled the Indian food safety regulator had to revoke the ban on its Maggi noodles and ordered fresh tests of samples in accredited labs. Nestle is now looking to get its instant noodles back on shelves by the end of the year. On social media, the company is pushing Maggi nostalgia with the hashtag #WeMissYouToo.

The Swiss conglomerate's Indian arm was ordered in June by the Food Safety and Standards Authority of India to withdraw all nine variants of Maggi instant noodles from the market after samples tested in some labs were allegedly found to contain excessive lead. Traces of monosodium glutamate, a flavor enhancer, were also found, despite product labeling saying the noodles did not contain the substance.

Nestle's Maggi had commanded a mammoth market share of roughly 80% before the recall order.

ITC, which held a nearly 20% market share before the Maggi crisis broke out, is hoping to fill the gap with its Sunfeast Yippee brand.

Sanjiv Puri, president of ITC's fast-moving consumer goods division, says the task at hand is to regain consumer trust for the category, and that talking about percentages is pointless now.

"We are reaching out to the consumer in an open and transparent fashion by sharing with them how we manufacture, how we source, how we test, so that they are reassured about product safety," Puri told the Nikkei Asian Review.

Other noodle makers have been more reticent. Hindustan Unilever and Japan's Indo Nissin Foods have withdrawn their products until the government clears up the Maggi scare. 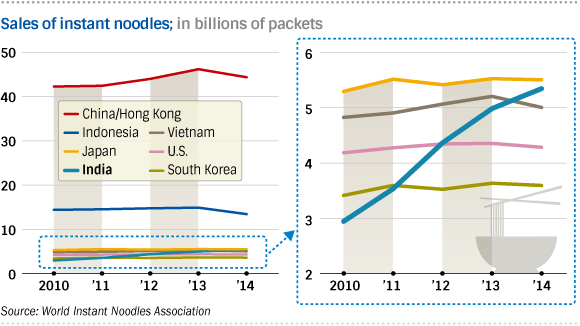 Until the Maggi crisis, India was one of the top five markets for instant noodles in the world. According to data compiled by the World Instant Noodles Association, India's demand for instant noodles skyrocketed by 82% to 5.34 billion packets between 2010 and 2014.

The growth in demand in India has been the fastest among the top 10 countries. The country climbed to fourth position in 2014 from seventh in 2011. Indian instant noodle demand is only behind China (including Hong Kong), Indonesia and Japan.

Some analysts believe the scare brought down India's monthly instant noodle sales by over 90% to around 300 million rupees ($4.52 million).

But brand revival is imminent, analysts say. Dairy Milk chocolate bars produced by Mondelez India Foods, formerly known as Cadbury India, and soft drink makers Coca-Cola and PepsiCo have in the past bounced back after being flagged by Indian authorities and later cleared.

"It (the instant noodle market) is strongly ingrained in the consumers' habits," said Abneesh Roy, associate director at Edelweiss Capital. "So, now with [the] negative news flow having stopped and ITC, too, campaigning aggressively, demand for the category will come back."

However, Roy believes Nestle will take two or three quarters to recover sales after it brings Maggi back to shelves. During this phase, he says, ITC and Hindustan Unilever will gain market share.

The Bombay High Court on Aug. 13 said Maggi noodles must be tested again in three properly accredited laboratories within six weeks. If lead levels are found to be within permissible limits, then the manufacturer, Nestle India, will be allowed to produce and sell Maggi noodles again.

Sales of Maggi noodles, once a cash cow for Nestle India, plunged during the second quarter, which saw a one-off charge of 4.5 billion rupees because of recalls and related expenses.

Even if Maggi returns to shelves, the legal troubles for Nestle India are far from over. India's top consumer court has also accepted a government 6.4-billion-rupee suit against Nestle India for alleged unfair trade practices, false labeling and misleading advertisements.

The National Consumer Disputes Redressal Commission, a quasi-judicial body established in 1988 under the Consumer Protection Act, issued notice to Nestle India to respond to government charges and posted the matter for hearing on Sept. 30.

Although ITC noodles appear to have come through the controversy relatively unscathed, there have been reports that the Food and Drug Administration of the northern state of Uttar Pradesh has found excessive lead in Yippee noodles -- an allegation hotly disputed by the company.

Shares of both ITC and Nestle India have, however, recovered from their lows in June when the ban was imposed on Maggi. Nestle India's shares have climbed 9%, while ITC is trading 7% higher. Nestle India had been trading around 7,000 rupees before the Maggi crisis broke out. It bottomed out at 5,499 rupees on June 8 and closed at 5,995.60 rupees on Sept. 4.

An Edelweiss Securities note points out that in the short term, there is a possibility of market share gain for companies selling instant noodles. But over the medium to long term, the company believes the Nestle issue will heighten scrutiny of other food makers, which could bring up new issues.

"We believe that if more such issues crop up," the company note read, "overall packed food sales will be impacted. Consumers may cut down consumption of packaged foods for health reasons, which will impact food companies apart from Nestle like HUL, ITC, GSK Consumer, Agro Tech Foods, Marico, Britannia" and Dabur India.

Food safety has become a hot social media topic since the Maggi crisis. Corporate names such as U.S. fast-food chains Wendy's and KFC have come under scrutiny online.

A customer complained of having found an earthworm in her mushroom burger on the second bite at Wendy's first Indian outlet in Gurgaon, in the northern state of Haryana. Wendy's India called it an "isolated incident," but pledged to take it very seriously.

In the southern state of Telangana, KFC has been battling accusations of selling fried chicken contaminated with bacteria that could cause food poisoning. A nongovernmental organization in Hyderabad, the state capital, had the samples tested in a government laboratory. "We believe that this is a case of malicious intent on the part [of] some individuals trying to damage our brand reputation," KFC said in a statement.

Tata Starbucks, a joint venture between the U.S.-based Starbucks Coffee and Tata Global Beverages, voluntarily suspended the use of ingredients not approved by the government in certain products sold in India.

Indian companies are also in the firing line. One story making the rounds on the Internet was that "black particles" were found in Dabur India's Real brand of fruit juice, which was launched over 15 years ago and generated 10 billion rupees in sales last year.